Despite a reasonably strong quarter and solid full-year earnings guidance, these investors reiterated their call for change.

On Wednesday, Bed Bath & Beyond (BBBY -9.94%) released mixed fiscal fourth-quarter 2019 results, relative to expectations. With shares down 8.8% on Thursday in response, and with several activist hedge funds already clamoring for change in recent weeks, it's obvious the home-goods retailer did itself no favors.

But that's not to say it was all bad news. While Bed Bath & Beyond's revenue fell a slightly steeper-than-expected 11% year over year to $3.31 billion, its adjusted earnings of $158.8 million, or $1.20 per share -- that is, excluding a big noncash goodwill and trade-name impairment charge taken during the quarter -- managed to beat consensus estimates by $0.09 per share.

During the subsequent conference call, CEO Steven Temares insisted the company has made "measurable progress" in each of its "foundational initiatives," and even saw the "pace of [its] transformation" accelerate last fiscal year. Further, he says Bed Bath & Beyond has made admirable strides in refining its sales mix, value optimization, and store concepts, as well as reducing costs, bolstering gross margin, and ultimately taking the right steps toward returning to sustained long-term growth.

But that insistence didn't appease Bed Bath & Beyond's skeptical activist investors, who came out in force again, arguing for nothing less than a complete executive overhaul. 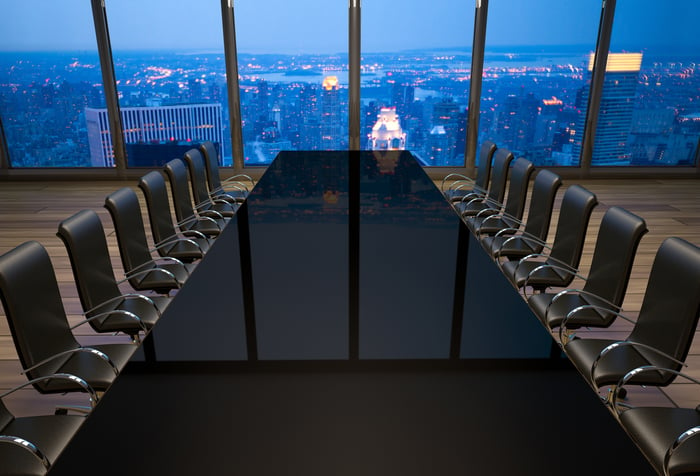 In a press release issued shortly after the call, the investor group -- which includes Legion Partners, Macellum Advisors, and Ancora Advisors -- stated:

Bed Bath's fourth quarter earnings provided another example of why the company needs new leadership. Under CEO Steven Temares' direction, the company has fallen far behind retail peers and the operating deterioration is accelerating. Despite a rapidly growing e-commerce business, Bed Bath experienced another quarter of declining same-store sales. [...]

The disappointing first quarter guidance consisting of accelerating declines in same-store sales and operating profit deterioration compared to managements' unsupported claims of progress serves as a stark reminder to us of how far removed from reality Mr. Temares and the Board have become. In our view, only the complete replacement of the Board and CEO will be sufficient to drive the necessary changes to produce lasting margin improvements and growth in earnings.

As I noted yesterday as the stock plunged, Bed Bath & Beyond told investors to expect first-quarter 2019 comps to decline between 5% and 6%, translating to earnings per share of $0.02 to $0.07 -- or (with a touch of irony) $0.07 to $0.12, excluding around $0.05 per share in costs related to severance and "shareholder activity." Even then, however, the high ends of both ranges were far below analysts' consensus estimates for first-quarter earnings of $0.29 per share.

But Bed Bath & Beyond also offered a light at the end of the tunnel, providing full fiscal-year 2019 guidance for adjusted earnings per share of $2.11 to $2.20, well above Wall Street's average prediction for $1.99 per share.

And management acknowledged the near-term shortfall, with CFO Robyn D'Elia predicting the company will achieve "gradual improvements in our financial performance as the year progresses, mainly after the first quarter."

Of course, while Bed Bath & Beyond is urging patience, the activist-investor group believes its weakness will extend beyond the first quarter as the company's strategic initiatives fail to yield fruit.

Time will tell who's correct. But judging by Bed Bath & Beyond's financial event schedule last year, time also isn't a luxury either party enjoys, with Bed Bath & Beyond's first-quarter 2019 report and its 2019 annual meeting presumably set for the end of June. Barring an agreement between the company and its activist investors before then, I suspect we'll witness a very interesting proxy battle unfold in the coming months.