Disruption has been the name of the game in retail over the past decade, but the home improvement market has been largely spared. In fact, both Home Depot (NYSE:HD) and Sherwin-Williams (NYSE:SHW) have crushed the overall market over the past decade, something that can't be said for most retail-related companies.

Consolidation has helped Sherwin-Williams improve profitability, but the fundamental advantage both companies have is that home improvement products don't translate particularly well to disruption by technology. Products are hard to ship, and people want to touch and feel what they're buying. So the final question is this: Which of these two stocks is a better buy today? 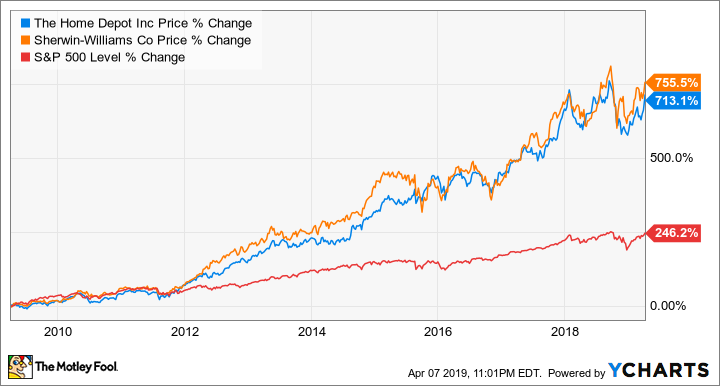 There isn't a huge difference between the operational improvement of Home Depot and that of Sherwin-Williams over the past decade. Sherwin-Williams has grown slightly faster, increasing revenue by 135% (compared to 60% at Home Depot) in part because of the acquisition of Valspar in 2017. Without that acquisition, the growth numbers would have been within a few percentage points. 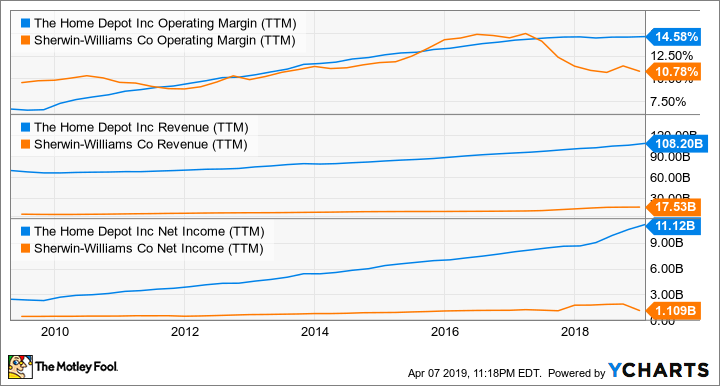 Net income is really where Home Depot has distinguished itself. The company has more than doubled operating margins over the past decade, and net income has more than quintupled as a result. Sherwin-Williams' revenue growth has driven most of its net income growth, with very little coming from margin expansion.

The tailwinds behind home improvement stocks won't last forever. A recession or a downturn in residential and commercial real estate markets could hurt both Home Depot and Sherwin-Williams. But I think one has a bigger opportunity long-term.

Sherwin-Williams is just starting to reap the rewards of consolidation, and I think we'll see it push to exploit the advantages of having fewer competitors very soon. That would involve raising prices to improve operating margins, which I mentioned earlier have lagged compared to those of Home Depot.

Home Depot has largely tapped out its growth opportunities, expecting just five net store openings in 2019. Of course, it'll benefit from increased volumes from existing stores, but there aren't a lot of new markets or untapped opportunities to improve margins. 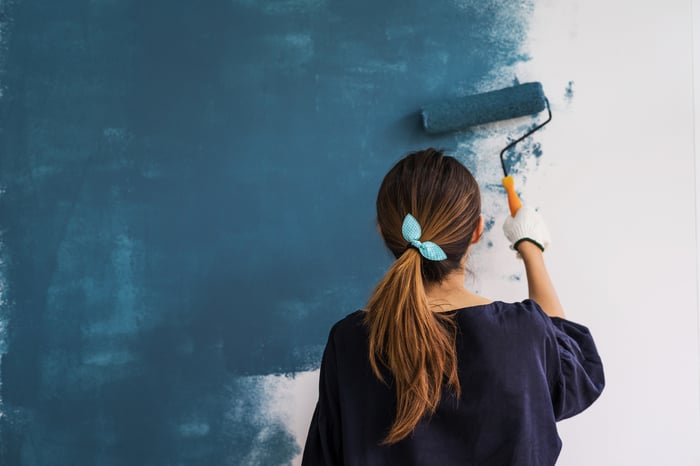 Over the last three years, Home Depot and Sherwin-Williams' stocks have traded with similar price to earnings multiples in the mid-to-low twenties. A bad fourth quarter has changed the dynamic short-term, but long-term the stocks trade at similar price-to-earnings multiples. If Sherwin-Williams can grow net income more quickly, as I hypothesized above, it would be a better value on this metric.

The big advantage Home Depot has is its dividend. Its 2.2% dividend yield is more than double that of Sherwin-Williams -- and income investors won't like much about a yield below 1%.

I think Home Depot has squeezed most of what it can out of its business, and growth on both the top and bottom lines will be harder to come by over the next few years. Sherwin-Williams, on the other hand, is just starting to fully incorporate the Valspar acquisition, and should have growing room to raise prices and expand margins. That's why I think it's the better stock between the two, but investors can't go wrong with either of these home improvement stocks today.