The home furnishings retailer is reportedly considering a sale of the business.

Well, that didn't take long. Home furnishings retailer At Home Group (HOME) is reportedly looking to put itself on the market, more than two years after its August 2016 IPO. Reuters says it became an acquisition target after two consecutive quarters of underperformance caused its stock to lose as much as 60% of its value, leading it to explore all options available -- including a sale of the company.

On the surface, At Home looks good. It's posted 19 straight quarters with sales growth exceeding 20%, and 20 consecutive quarters of comparable store sales increases, higher costs for raw materials, freight, and marketing, despite stiff competition both on- and offline. But it has a lackluster outlook for the future, one the home decor specialist doesn't see turning around until at least next year. 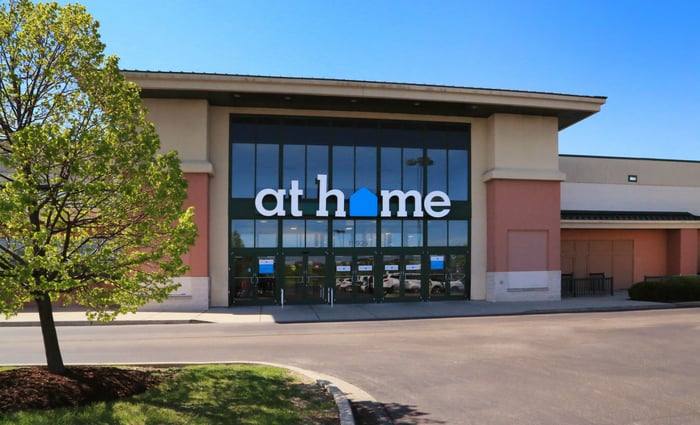 The home furnishings market is nothing if not highly fragmented, with major retailers including Bed Bath & Beyond (BBBY 4.12%), Home Goods, RH, Williams-Sonoma (WSM -0.15%), and Pier 1 Imports on one side, and big box stores such as Walmart (WMT 0.62%) and Target on the other.

There are also numerous small, independent chains, as well as online retailers like Amazon.com (AMZN -1.08%) and Wayfair.

The breadth of the competition is a big part of the problem, but At Home tries to differentiate itself from its rivals by its scale. It builds massive home decor supercenters that average 110,000 square feet, more than double the size of the typical Bed Bath & Beyond and almost five times as large as the TJX Companies' Home Goods and Homesense chains.

While that gives it the opportunity to blanket a customer in selection, it limits how many stores it can build and where it can build them. It also requires the retailer to take on a lot of debt. At Home believes the market can support some 600 or so stores, and with only 180 in operation so far, there should be plenty of room to grow.

But maybe not. With competition so thick, consumers have a lot of choices available to them, and that is showing up in At Home's slowing sales growth rates and profit margin pressures. While no company can maintain high growth rates forever, the retailer forecast revenue growth rates slipping into the mid-teens this year and says building out a new distribution center will apply headwinds to gross margins for at least the coming year, though the new center will allow it to service double the number of stores.

Still, the market for home furnishing could be weakening. Haver Analytics found consumer spending for such items has fallen for four straight months,  and At Home doesn't have a real online defense against stalling sales. Instead, the company says consumers largely prefer browsing online before going to a store to buy, so its strategy is to let them look at goods on its site, and then direct them to a local store. This approach can be limiting, however, as At Home remains relatively localized compared to some of its more national competitors -- and even less accessible than its peers who are willing to sell wares online.

Meanwhile, internet-based home furnishings retailers are enjoying tremendous growth, even in a marketplace where Amazon is responsible for a quarter of all the sales made and where Walmart recently launched MoDRN, an online-only home furnishings brand.

Statista data indicates Amazon furniture and home furnishings sales rose by more than 30% last year, and Walmart is "working with a great sense of urgency" to build up sales in its home department, which is more profitable. Its investments in digital technology allowed it to introduce 3D virtual shopping and so-called buy-the-room capabilities for home goods on its website.

So far, At Home Group has proved capable of growth, but it may have reached its full potential. Its strategic analysis, however, may decide whether staying the course is the right decision, which could mean At Home's stock, which has surged 33% from its low point just before Christmas in part from talks of a potential sale, could unwind all the gains made.

Here's Why At Home Group Stock Shot Up Today
370%