A brief look at the company's financial outlook, its strategy for 2019, and significant events that may have affected first-quarter results.

Leading North American railroad operator Union Pacific (UNP -0.91%) releases first-quarter 2019 earnings on Thursday before the markets open for trading. Shares have appreciated 22% so far this year, and the rail giant will likely need to deliver an impressive report to maintain its early-2019 momentum. Let's review key items investors should focus on when the organization issues its report.

While Union Pacific doesn't offer specific quarterly earnings guidance, the company shared broad 2019 financial goals at the J.P. Morgan Aviation, Transportation, and Industrials Conference in March. These goals include volume growth in the low single digits against the prior year and pricing increases aimed at keeping ahead of cost inflation. Union Pacific also intends to wring out $500 million in productivity savings this year through implementation of its "Unified Plan 2020" while achieving an operating ratio, or OR, of 61% or lower.

The operating ratio is a key measure used by rail companies to gauge efficiency and is derived by dividing total expenses by total revenue in a given quarter. Thus a lower reading equates to higher efficiency.

Since Union Pacific publishes its rail statistics weekly, many investors are already aware that its volume failed to hit low-single-digit growth during the first quarter. The organization's volume was challenged by extreme weather during the last three months. In addition to heavy snowstorms during the winter season, the entire rail industry was subject to delays caused by massive flooding in the Midwest near quarter's end.

Union Pacific's weekly statistics reveal that through the first quarter, total carloads fell 5% against the first quarter of 2018 to 1.06 million carloads. This slump was offset by intermodal container and trailer traffic, which improved by 4% year over year to 886,000 units. Total volume (carloads plus intermodal) thus dipped 1% to 1.95 million units during the quarter.

According to the American Association of Railroads (AAR), total industry volume in North America declined by 1.3% year over year in the first quarter of 2019 due to the acute weather conditions, so Union Pacific's performance is in line with that of competitors.

As for the effect of a volume decline on revenue growth in the first quarter, the surge in intermodal traffic (which along with vehicle shipments makes up most of Union Pacific's "premium" category) may offset effects on the overall top line. The premium category tends to command better pricing power than agricultural, industrial, and energy shipments. Last year, premium was also Union Pacific's largest freight category, accounting for 31% of total freight revenue.

Indeed, rival CSX (which reported its own first-quarter results on April 16) compensated for flat volume with higher pricing and booked a 5% increase in revenue over the prior-year quarter. 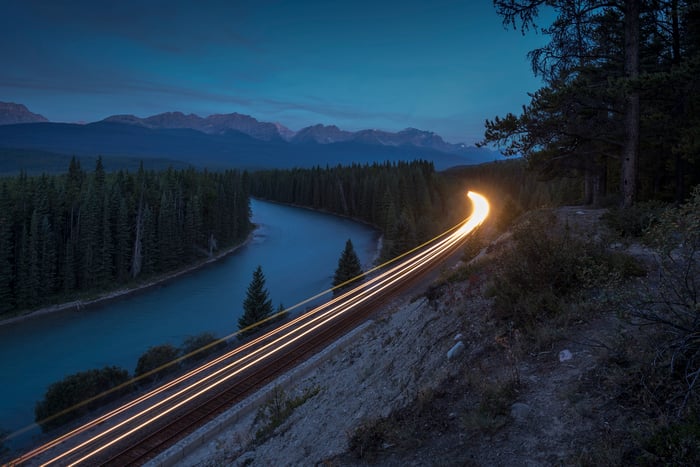 Geographically, Union Pacific has completed two of three phases of the plan across its rail lines. The first two phases cover roughly two-thirds of Union Pacific's network, including its dense, largely north-to-south network in the midwestern states. The third phase, which will cover the Pacific Northwest and most of California, is scheduled for completion later this year.

As I've recently discussed, Union Pacific's PSR efforts are initially focused on more effective use of assets, primarily by reducing cars and locomotives in service. Investors can measure progress on PSR using traditional rail metrics like train velocity and average terminal dwell time. However, given the flooding in the Midwest in March, the company may report limited progress on these measures and PSR in general following some initial success in the fourth quarter of 2018.

Union Pacific has adopted the principles of PSR in part because it's previously struggled to decrease and thus improve its operating ratio. Over the last five years, Union Pacific's OR has ranged stubbornly between roughly 62% and 64% -- a decent efficiency threshold, but one that leaves much room for optimization.

Management intends to pull UP's OR below 61% in 2019 and aims to lower it to below 60% in 2019. Shareholders will hope to see an improvement over 2018's first-quarter OR of 64.6%. (Union Pacific ended 2018 with a year-long OR of 62.7%.) However, observers shouldn't be surprised if this important companywide 2019 goal, at least in the first quarter, is revealed to have been stymied by the weather.

Down 25%, This Surefire Passive-Income Powerhouse Is a No-Brainer Buy for 2023