There's no sign of an economic slowdown in these quarterly results.

Shares of United Rentals (URI 0.60%) jumped Thursday morning after the construction equipment rental specialist reported quarterly results that blew past expectations and provided an optimistic outlook for the months to come. As of 11:05 a.m. EDT, the stock was up 7.8%.

Yesterday after markets closed, United Rentals reported first-quarter adjusted earnings of $3.31 per share on revenue of $2.12 billion, easily surpassing analyst expectations for EPS of $3.05 on revenue of $2.07 billion. The company said that adjusted EBITDA in the quarter climbed 18.1% year over year to $921 million, giving it an adjusted EBITDA margin of 43.5%. 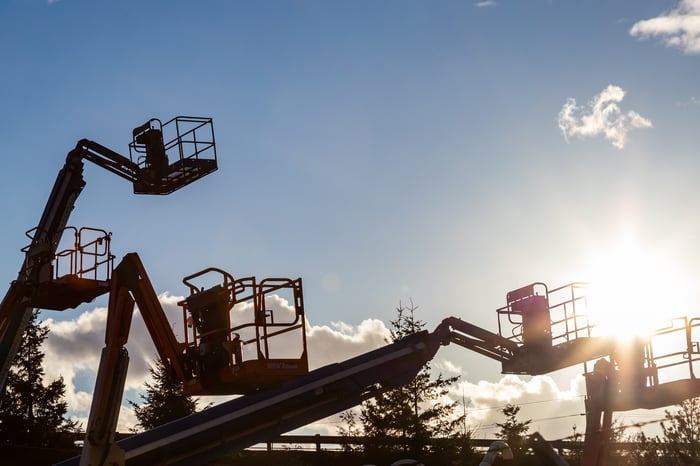 Investors have been bracing for the worst at United Rentals for some time now, with shares down 23% over the past 12 months even after Thursday's gains due to concerns about a slowing economy that might eat into demand for the company's equipment rentals. The market was pleasantly surprised with fourth-quarter results released in January, but analysts were still too conservative when projecting first-quarter earnings.

United Rentals reaffirmed its forecast for full-year 2019 revenue of between $9.15 billion and $9.55 billion, and management said it sees no sign of an imminent slowdown.

"We're pleased with our solid start to 2019, and the broad-based growth we realized across geographies and verticals," CEO Michael Kneeland said in a statement. "By reaffirming our guidance, we're emphasizing our confidence in the cycle. The year is unfolding as we expected -- customer sentiment remains positive, and feedback from the field points to healthy end-market activity."

United Rentals has been a fantastic long-term winner, with its shares easily beating the S&P 500 over the past 10 years. The company has been a rapid-fire consolidator since the late 1990s, building an impressive portfolio of equipment that gives it a competitive advantage over smaller rivals. 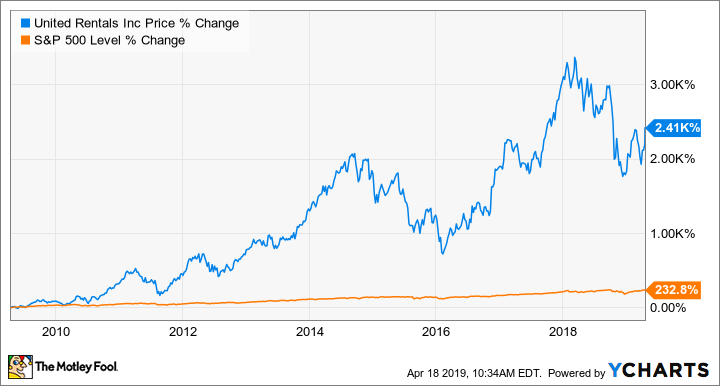 United Rentals is still subject to market cycles, and there are still lingering concerns about the potential for trade wars and tariffs slowing some of its end markets or making its equipment purchases more expensive, but the company remains well-positioned to outperform as long as the economy cooperates.

Why United Rentals Stock Soared to an All-Time High Today

3 Infrastructure Stocks to Buy in June
405%