Starbucks (NASDAQ:SBUX) has over 30,000 retail stores in 78 countries around the world. In the United States, which hosts about half of those cafes, it's not uncommon for the chain to have multiple locations in a town, or even dozens in a large city.

This seems like a pretty big barrier to entry, but the coffee business continues to attract new rivals. Chains like McDonald's and Burger King (a subsidiary of Restaurant Brands International) have made efforts to step up their coffee games, and even 7-Eleven has a new prototype store that includes a Starbucks-like cafe.

Now, another well-known brand has decided that cafes are a big part of its future, and the company isn't deterred by the huge lead Starbucks holds. 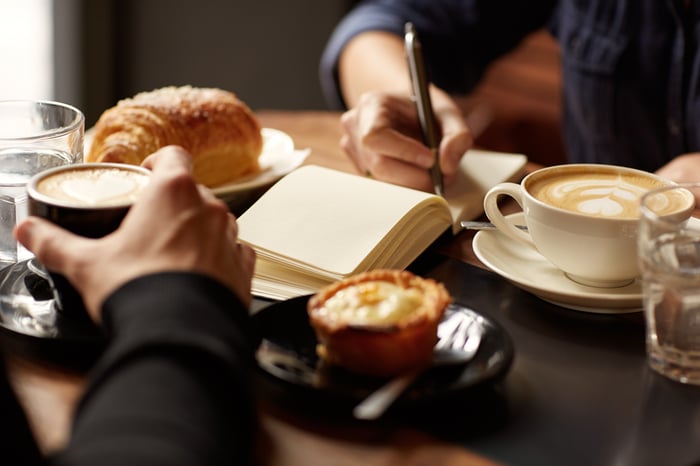 Which chain is opening cafes?

Godiva, the privately held chain known for its mostly mall-based chocolate stores, plans to open 2,000 cafes in the next five years, according to the Associated Press. About a third of those will be in the U.S.; the first just opened in Manhattan.

The locations won't just sell chocolate, or the ice-cream confections some offer now. They'll be full, sit-down cafes with an expansive coffee menu, the AP said. They will also offer something called the "croiffle," a cross between a croissant and waffle pressed on a waffle iron, with fillings including chocolate or cheese.

Some of the 2,000 cafes will be conversions or expansions of existing stores. The company, however, isn't limiting itself to mall-based locations.

"We really have a stronghold on formal gifting, but we want to expand to everyday consumption," CEO Annie Young-Scrivner told the AP.

It's a tough switch

It's easy to see why Godiva wants to go after this model. The company's current stores are somewhat limited when it comes to repeat visits. Even locations that offer ice cream, shakes, and chocolate-dipped items are still somewhat special-event spaces, because their menu is quite decadent.

By launching cafes, the company is banking on the idea that an expanded menu (including healthier options) might make customers stop in more often. That's an attractive proposition, especially at existing stores. They should still be able to sell boxed chocolates and gifts, perhaps even expanding that business as more customers come in.

The challenge is that Starbucks executes really well. Yes, it's a coffee-based cafe, but it's one that has innovated with both its menu and its technology. Godiva has a strong brand name, but will it be able to steal customers from a company that's become a habit for its customers?

In addition, Starbucks has a number of moats protecting its business. Its loyalty program, for example, has 16 million active members who use its app for ordering ahead and mobile payment, as well as earning free drinks. The company also has the advantage of scale. Even with 2,000 cafes globally, Godiva would not have 10% of Starbucks' reach now (and even less by 2024, as the coffee giant continues to grow).

Starbucks also has impressive menu innovation and a roster of past hits that can win back lapsed customers. It's hard to compete with the lure of the pumpkin-spice latte, or Starbucks' impressively paced rollout of new drinks (and food).

Godiva may become an alternative to Starbucks -- a cafe chain that people visit as a change of pace. It's unlikely, however, to win much market share from its behemoth of a rival unless it offers something unique. Croiffles probably aren't enough, but they are an encouraging sign that the company understands it needs to be different from its rival -- and lean on its own heritage -- to have any chance of competing.