Here are three stocks that not only have high yields but also have lots of room to grow.

High dividend yields are certainly nice, but high dividend yields that are safe and sustainable are even better. Add in potential for long-term growth, and you've got the trifecta. We asked three of our Motley Fool contributors to discuss their favorite high-yielding stocks, and here's why they think you should take a closer look at Tanger Factory Outlet Centers (SKT 2.93%), Hanesbrands (HBI -27.90%), and Verizon (NYSE: VZ).

A huge yield and lots of upside potential

Thanks to headwinds in the retail sector, Tanger has taken a beating in recent years, currently trading just over its 52-week low and yielding 7.4%. However, it's important to realize Tanger isn't just any retail stock. 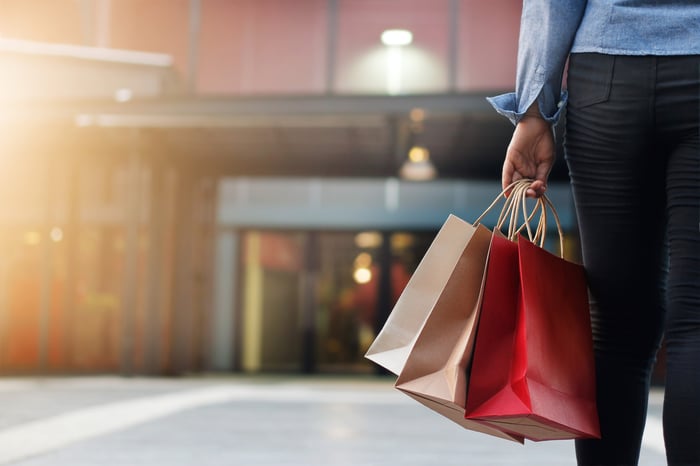 While full-priced discretionary retailers have indeed been going bankrupt and/or closing stores at an alarming pace, there are some areas of retail that are holding up well. Two areas in particular are discount-oriented retail and experiential retail. Tanger's properties fit in both categories. Outlets offer bargains that generally can't be found online, and the bargain-hunting experience is a big part of the draw.

To put some numbers behind these statements, consider that per-square-foot sales at Tanger's properties actually increased in 2018. And the portfolio ended the year with 97% occupancy.

Tanger has a diverse group of tenants, most of which are financially strong companies like Gap, Under Armour, and Nike, just to name a few of the largest. The company has understandably pumped the brakes on growth until the dust settles in the retail space, but the outlet industry is still quite small, and with an e-commerce-resistant business model, Tanger has massive growth potential in the years ahead.

A dividend growth stock in disguise

Keith Noonan (Hanesbrands): If you're the type of person who pays attention to the brands that people are wearing when you're out and about, it's possible that you've noticed a lot more people seem to be sporting Champion clothing. That's certainly been my observation, and while the surge in popularity for Hanesbrands' key sportswear brand is borne out by 50% year over year sales growth excluding mass channel retail last quarter, it seems like Wall Street is still underestimating how hot Champion is.

Hanesbrands' socks and underwear business has been sluggish, and large retailers opting to de-emphasize the company's clothing in favor of foregrounding their own in-house brands continues to be a threat, but there's an attractive opportunity here for income-focused, long-term investors.

Despite its dividend having been flat since 2017, Hanesbrands has tripled its payout over the last five years and sports a chunky 3.3% yield. The company has been on an acquisitions spree, and that put the brakes on payout growth, as management opted to pay down debt that was used to fund the new businesses that it added.

However, Hanesbrands has been using its free cash flow to take big chunks out of its debt load, and it should approach its debt-to-EBITDA target in a couple years at the latest. That makes the clothing company a potential dividend growth stock in disguise, and management has stated that returning cash to shareholders remains one of its top long-term capital allocation priorities.

Hanesbrands stock has rallied in 2019, with shares up roughly 45% year to date, but it remains undervalued. Shares are still down single digits over the last year and trade down by roughly a third of its value over the last three years. With the stock trading at just 10.5 times this year's expected earnings and sporting a big yield that could conceivably get much bigger over the next five years, the underestimated Hanesbrands presents appealing value for income investors.

Connect to this 5G opportunity

Chris Neiger (Verizon): Verizon Communications has undoubtedly had its ups and downs recently. The company had to take a $4.6 billion writedown at the end of 2018 after its purchase of AOL and Yahoo didn't yield the content and advertising gains the company had hoped for. But that doesn't mean the telecom is all out of opportunities.

For example, Verizon is laser focused on 5G -- the next evolution of cellular wireless connectivity -- and is beginning to build out its new network. 5G speeds will be up to 20 times faster than 4G LTE networks and will have lower latency (which means faster connections between devices and cell towers). This will open up new opportunities for telecoms to both charge more for their 5G networks and sell new services to companies looking to connect Internet of Things devices.

Verizon has already taken some significant steps in 5G, with the launch of its new network in a few locations just this month, and has committed to bring 5G to 30 cities by the end of this year. Why does 5G matter so much for Verizon? Because the company believes that the new cellular standard will enable $12.3 trillion in global economic value by 2035.

Verizon has already made deals with smartphone makers to bring some of the first 5G phones to the U.S. this year and has already established a new 5G smartphone plan that costs $10 more per month than the company's current unlimited data plans. When you add Verizon's 5G opportunity to the company's impressive 4% dividend yield, investors get a great dividend play with lots of new opportunities to benefit from a growing tech trend.

Why Is Tanger Factory Outlet's Dividend Yield So High?

Is Tanger Outlets a Great Buy Before 2023?