So instead, I decided to go with a realistic number of marijuana stocks that investors can especially like. These four stocks are Constellation Brands (NYSE:STZ), Innovative Industrial Properties (NYSE:IIPR), KushCo Holdings (OTC:KSHB), and Scotts Miracle-Gro (NYSE:SMG). Here's specifically what you can like about these marijuana stocks on 4/20. 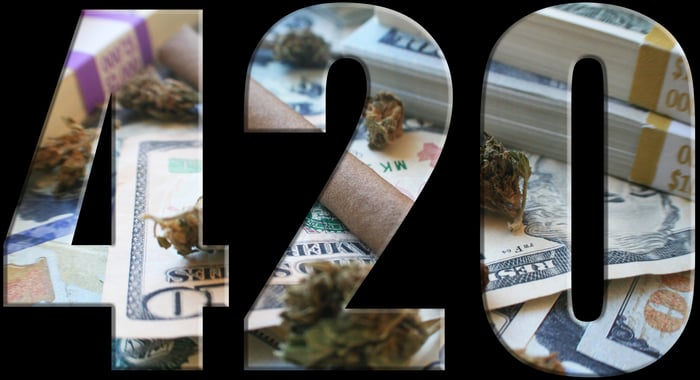 Yes, Constellation Brands is best known for its popular premium beers Corona and Modelo. However, Constellation qualifies as a marijuana stock thanks to its 38% stake in top Canadian marijuana producer Canopy Growth (NASDAQ:CGC).

Constellation and Canopy are gearing up to launch cannabis-infused beverages in Canada later this year after regulations for cannabis edibles products are finalized. Canopy Growth already commands the highest market share in the Canadian adult-use recreational marijuana market.

The really big opportunity for Constellation and Canopy, though, lies in the U.S. Neither company can market marijuana products in the U.S. and keep their stocks listed on major stock exchanges as long as marijuana remains illegal at the federal level. But legislation has been introduced in both houses of the U.S. Congress to revise federal laws. There's an outside chance that the doors to the U.S. marijuana market could swing open relatively soon.

In the meantime, Canopy has used some of the cash it received from Constellation to begin constructing a large-scale hemp industrial park in New York state. The passage of the 2018 Farm Bill in December paved the way for the U.S. legalization of hemp, which is cannabis that contains very low levels of the psychoactive chemical THC. The hemp-based cannabidiol (CBD) market should present a tremendous opportunity for Canopy and, by extension, Constellation Brands.

Innovative Industrial Properties (IIP) focuses on the U.S. cannabis market in a unique way. The company is the leading real estate investment trust (REIT) specializing in medical cannabis properties in the U.S. IIP is the first -- and, at least so far, only -- cannabis-focused REIT to list its shares on the New York Stock Exchange.

The company currently owns 18 properties in 11 states. These states include several with large legal cannabis markets such as California, Colorado, Illinois, Massachusetts, and New York.

All of IIP's properties are leased to cannabis operators under long-term leases that have a weighted-average remaining lease term of nearly 15 years. The company's average current yield on capital for its properties, including rents and property management fees, is 14.9%.

There are two things that investors should really like about IIP. First, it pays a dividend that yields 2.2%. Second, the company should be able to continue growing by repeating its formula of reinvesting profits into buying additional properties to lease out.

All of the cannabis products that will be sold on 4/20 (and any other day, for that matter) need packaging. That's where KushCo Holdings comes into play. The company ranks as the leading supplier of packaging solutions to the U.S. cannabis industry.

Business is booming for KushCo, with the company recently reporting record-high revenue. KushCo generates well over half of its revenue in California, especially from sales of vape products. It isn't surprising that California is the company's largest market since the state claims the biggest legal cannabis market in the world.

But KushCo thinks that the northeastern U.S. states combined could soon become an even greater opportunity for it than California. In particular, Massachusetts is one of the company's fastest-growing markets, with sales more than doubling in Q2 from the previous quarter.

KushCo isn't just focused on packaging, though. The company also sells solvents and hydrocarbons used in extracting oils and cannabinoids from cannabis plants. The legalization of hemp in the U.S. should open up a major new market for this business in extracting CBD from hemp.

For years, Scotts Miracle-Gro was known only for its lawn and garden products. These products continue to be an important part of Scotts' business. But the company's Hawthorne Gardening subsidiary is also now the top supplier of hydroponics products to the U.S. cannabis industry.

Like KushCo, Hawthorne makes more than half of its revenue in California. The first year of California's legal recreational market wasn't nearly as good as hoped, in large part due to burdensome regulations and tax rates that were too high. However, Hawthorne General Manager Chris Hagedorn stated in Scotts' Q1 earnings call that California is recovering.

Scotts' cannabis-related revenue could get a boost as more states legalize cannabis, especially recreational use. Three large states appear to be on course to legalize recreational marijuana in the near future -- Illinois, New Jersey, and New York.

And while Hawthorne should contribute significantly to Scotts' growth, the company also has good things going on with its consumer lawn and garden products business. Scotts is launching several new organic products this year that the company expects to be big successes.

Most likely to be liked

Innovative Industrial Properties has been by far the biggest winner in terms of stock performance so far in 2019. But I think that the marijuana stock most likely to be liked by the greatest number of investors is Constellation Brands.

Constellation's premium beers continue to enjoy strong and growing demand. The company recently sold off its weaker-performing low-priced wines to E. and J. Gallo. Constellation's investment in Canopy should pay off nicely in the coming years as global medical cannabis markets grow and as Canopy expands into the U.S. hemp CBD market.

There are plenty of reasons to really like Constellation Brands on 4/20 and throughout 2019.