Northrop's B-21 may be the future of U.S. Air Force bombers, but right now it's Boeing's B-52 that's winning all the cash.

Northrop Grumman (NOC 0.86%) may have won the contest to build the U.S. Air Force's new B-21 Long Range Strike Bomber and the $90 billion payday that comes with it. But don't cry too much for Boeing (BA -0.59%), the loser in that contest. Boeing just landed a $14.3 billion award -- for airplanes it has already built! 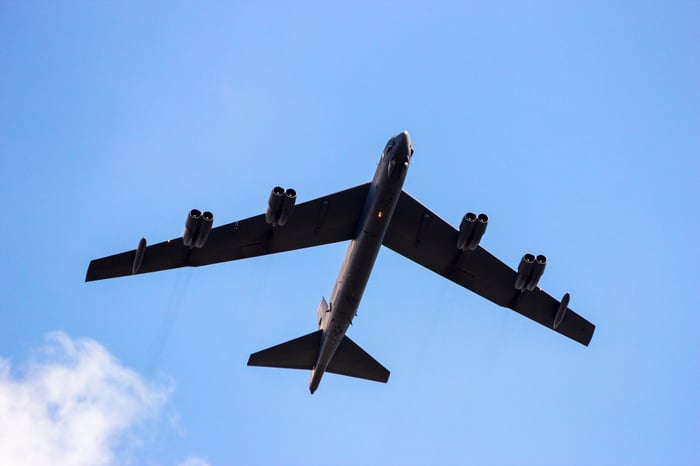 Northrop's B-21 may be the future of U.S. Air Force bombers, but right now, it's Boeing's B-52 winning all the cash. Image source: Getty Images.

The Pentagon giveth, and the Pentagon ... giveth and giveth even more

Last week, in its daily digest of defense contracts awarded, the U.S. Department of Defense announced that Boeing had won "a $14,314,300,000 indefinite-delivery/indefinite-quantity contract for the modification, modernization, engineering, sustainment and test of the B-1/B-52 weapons systems."

Boeing was the logical contractor to tap for these upgrades, seeing as it, or its predecessor companies, built both the B-1 and the B-52. (The other strategic bomber that you've probably heard of, the B-2, was built by Northrop Grumman, as the new B-21 will be.)

Dubbed the "B-1/B-52 Flexible Acquisition and Sustainment contract," this contract will pay Boeing "for the upcoming modernization and sustainment efforts to increase lethality, enhance survivability, improve supportability, and increase responsiveness" of the Air Force's B-1 and B-52 strategic bomber fleets -- 133 bombers in total, according to the latest figures from Flightglobal's World Air Forces 2019 report.

Average it out, and the Air Force is paying a touch more than $107 million per plane just to upgrade each bomber -- or about what it would cost to build a new F-35 stealth fighter jet from the ground up!

At $14.3 billion, Boeing's B-1/B-52 upgrade contract equates to more than seven months' revenues for Boeing's Defense, Space & Security division (BDS), the second largest of the company's three main divisions, but its least profitable at a profit margin of just 6.9% according to data from S&P Global Market Intelligence.

What will be interesting to see over the 10 years that this contract runs (DOD says the bomber upgrade work "is expected to be complete by April 11, 2029") is whether this contract ends up improving margins at BDS. After all, "modernization and support" services sound more in line with the work that Boeing global services does for its commercial customers than the construction of entire new warplanes that BDS focuses on. If this kind of work results in such above-average profit margins on the civilian side of the business, it stands to reason it could be similarly profitable on the defense side -- helping to revive profit margins at Boeing Defense.

Whatever profit margins Boeing ends up making, it had best make good use of the money, because there may not be too much more where this came from.

Once Northrop Grumman begins churning out B-21s early next decade -- an estimated 100 planes are expected to be built -- the U.S. Air Force plans to begin retiring its B-1 Lancer fleet, as well as its fleet of Northrop-built B-2s. The fate of the venerable B-52 Stratofortress, in use since the 1950s, is less certain. Some commentators believe the B-52 will continue flying well into the 2040s. But given its age, chances are that the Air Force will decide to phase out the Stratofortress at some point, in favor of shiny new B-21 Raiders.

When that happens, expect to see Boeing fade into the background as Northrop Grumman lines up to claim the multi-billion-dollar bomber "modernization" contracts of the future.