A look at the risks you need to weigh before buying GE stock.

You can certainly make a case for buying stock in General Electric (GE -1.33%). If highly regarded CEO Larry Culp can engineer a turnaround, then investors can look forward to significant increases in earnings and cash flow in the coming years.

However, buying GE stock doesn't come without risk. So let's take a look at three key assumptions you need to make before buying the stock.

Three things you need to know about General Electric

To buy GE stock, you have to have a few core beliefs about the business:

All three of these factors probably need to come together to justify buying the stock. 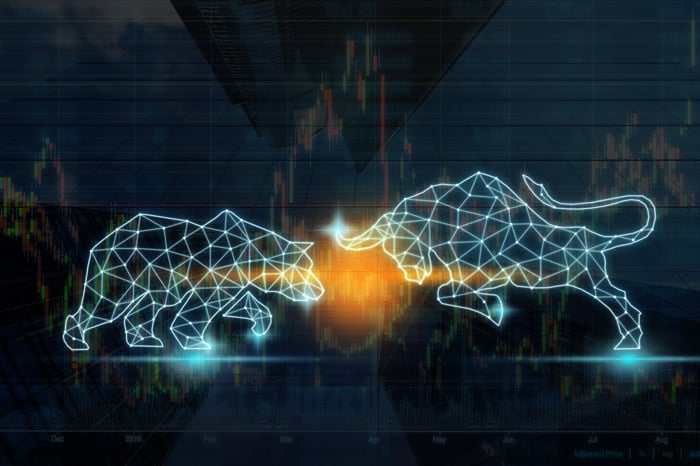 The bears and bulls continue to do battle over GE stock. Image source: Getty Images.

If a recession comes, GE -- and almost every other industrial stock -- will come under pressure. The question of how GE might deal with an upcoming recession came up at a recent Bank of America Merrill Lynch conference, with Miller arguing that most of GE's businesses "are pretty recession-resilient for the next 12 to 18 months." She went on to reference the "substantial backlog" that GE's power and renewables businesses have.

She has a point. After all, GE's total backlog in the fourth quarter was $391 billion, roughly 3.2 times its 2018 revenue of $122 billion. Moreover, a look at backlog compared to last year's revenue shows that power has 3.4 times its revenue in backlog, and renewable energy has 1.8:

However, where GE bulls are on weaker ground is that renewable energy and power are both forecast to be free-cash-flow-negative in the next couple of years. And a recession would probably turn order growth negative for both segments -- GE would need to add orders in order to generate growth.

Moreover, during the last recession in 2008-2010, GE's aviation business revenue declined from $19.2 billion to $17.6 billion, with operating profit down from $3.7 billion to $3.3 billion over the period. And in 2018, the segment's spares sales, which tend to be highly profitable, ran at $27.5 million per day; that's around $10 billion if annualized -- a significant share of GE Aviation's $30.6 billion revenue in 2018. If the economy turns down, then growth in passenger and cargo traffic is likely to slow, and so will aviation spares sales.

Finally, based on management guidance, GE industrial cash flow won't be positive until 2020. The company is battling to reduce net debt of $55 billion in its industrial businesses and $66 billion in GE Capital.

All told, GE's backlog will provide some support to revenue generation in the next few years, but it still has significant cyclical exposure in all of its non-healthcare segments, and the company is not in a good financial position to deal with a potential recession.

2. Is Power set to improve?

Both Culp and the CEO of Gas Power, Scott Strazik, "are just very focused on improvement over the next year." However, though GE's management promised improvement as far back as the outlook meeting in November 2017, Miller admitted recently that "we're finding that we're not yet there on on-time delivery and execution."

Culp's track record at Danaher suggests he's not a man to bet against, but until the company demonstrates tangible improvement on transactional services, the jury will be out on whether Power can be turned around as expected.

3. Will Aviation remain in growth mode?

The LEAP engine is the key to the aviation segment's future -- and if the Boeing (BA -5.01%) 737 MAX grounding and production cut is more than a temporary issue, GE will certainly feel the effects. The LEAP is the sole engine option on the Boeing 737 MAX, and the aircraft is set to be one of the two workhorses of global aviation. The other is the Airbus A320 NEO, on which LEAP competes with United Technologies' geared turbofan from Pratt & Whitney.

Boeing is working on a software update, so now is not the time to panic-sell the stock, but it's far from clear that the 737 MAX will return to service just yet, as Boeing hopes.

All told, there are three things you need to be confident about in order to buy GE stock. If any of one of them goes wrong, GE will struggle to meet its earnings and cash flow outlook in the coming years, let alone its debt-reduction plans.

There's definitely a lot of upside potential with GE, but there are a lot of risks too. This makes the stock suitable for more aggressive investors with a tolerance for risk, but seeking a high return.