Reporting 2018 annual production of 349,147 ounces, Eldorado Gold (NYSE:EGO) may have exceeded its original guidance of 290,000 to 330,000 ounces and reported revenue of $459 million -- a 17.% year-over-year increase -- but dig below the top line, and you'll find the rest of the company's income statement didn't glitter quite as much. Due to the impact of the first year of operations at Olympias, operating cash costs per ounce sold jumped to $625, a notable increase from the $509 that the company reported in 2017. The higher cash costs and impairment charges, moreover, affected the company's profits. Eldorado reported a net loss from continuing operations of $7.1 million in 2017, but that figure rose to $361.9 million in 2018.

Will the company be able to regain some of the luster it lost last year? Let's dig into Eldorado's forecast for 2019 to see what investors can expect. 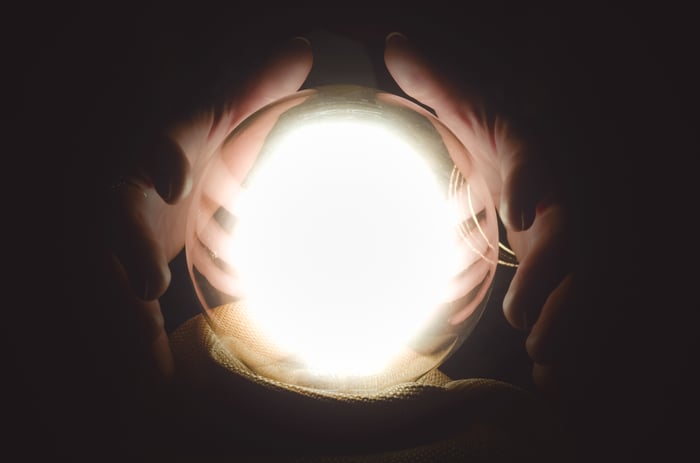 The prophecy pertaining to production

Successfully digging more of the yellow stuff out of the ground in 2018 than it did in 2017, Eldorado believes that 2019 will glitter even more brightly, forecasting gold production of 390,000 to 420,000 ounces. Should the company achieve the midpoint of its guidance, it will represent a 16% increase over the total reported last year. The company believes it will achieve this tanks to starting commercial production at Lamaque in the first quarter. Located in Quebec, the Lamaque mine is forecast to produce 100,000 to 110,000 gold ounces in 2019.

For those familiar with Eldorado's portfolio, the burning question may be, "What about Skouries?" The answer: Yes, what about it? It's unclear whether 2019 will be the year when Eldorado will be able to move forward with development of the mine, located in northern Greece. In the company's Q4 2018 report, management indicated that it "continues to attempt to work with the Greek government to find a path forward" for the project.

While Eldorado sees an increase in gold production during the coming year, it doesn't expect costs to simultaneously skyrocket. In 2018, Eldorado reported all-in sustaining costs (AISC) of $994 per gold ounce, and management forecasts AISC per gold ounce in 2019 to fall to between $900 and $1,000. Although management hasn't provided specific AISC forecasts for each of the mines, it has provided guidance on the mines' projected cash operating costs, giving insight into the coming year. For one, management foresees increased profitability at Kisladag, where cash operating costs were $662 per ounce sold in 2018 but are projected to be $570 to $620 in 2019. Similarly, cash operating costs per ounce sold at Olympias were $764 in 2018; however, they're forecast to be $550 to $650 in 2019.

Besides the costs at the individual mines, investors can monitor the company's general and administrative expenses in the coming year. Having articulated a concerted effort to reduce this expense in the future, management, on the Q4 2018 conference call, said that it had budgeted for 2019 a 10% reduction in general and administrative expense from the $46.8 million it reported in 2018.

While gold mining companies make their green by digging the yellow metal out of the ground, it's crucial that they replenish their reserves if they hope to have a future paved in yellow brick. To this end, Eldorado forecasts $18 million in capitalized exploration for 2019 to grow the mineral resources at several of the assets in its portfolio. At Lamaque, for example, Eldorado has 37,000 meters of exploration drilling planned to expand resources in the lower part of the Triangle Deposit. Likewise, Eldorado has 25,500 meters of drilling planned at Efemcukuru and 7,000 meters of underground drilling at Olympias.

These brownfield projects provide great value to the company because they represent organic growth opportunities at locations where infrastructures are already in place, reducing the need to seek higher-cost acquisitions.

With gold production expected to rise and AISC projected to fall, it seems as though Eldorado Gold is on the verge of a more lustrous year than the one it reported in 2018. It certainly seems that Wall Street believes so, as the stock was the subject of several upgrades in early February. With the ample number of forecast figures that management has provided, investors will have plenty to monitor in the months ahead.