Shot selling this highly valued stock may seem like a good idea at first, but it's way off base in the long run.

Carvana (CVNA -0.74%) is the third-most-shorted stock on the NYSE, but there is no good reason for investors with an appropriate long-term investing horizon to worry.

Shares of the used car dealer may indeed fall in the near term, particularly with first-quarter earnings due out soon. If they don't live up to expectations, it could cause the stock to tumble, since Carvana's valuation is priced for it not to make any mistakes.

And though losses have been widening, it's also been able to produce more impressive revenue growth as consumers respond to its better car-buying experience. Because it's able to differentiate itself from the competition with a unique selling proposition, it just might be able to achieve what otherwise would be pie-in-the-sky goals. 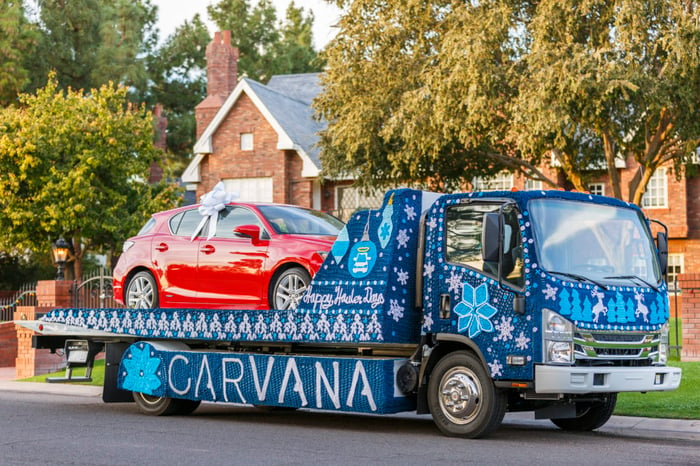 Visiting a car dealership is an unpleasant task for many. Carvana attempts to eliminate most of the unpleasant steps by conducting the entire transaction online and with fixed prices. A few years ago, Ipsos Public Affairs conducted a study for used-car retailer CarMax (KMX 0.71%) and found the No. 1 regret buyers had was paying too much for a car that didn't hold its value. Carvana will also deliver the car right to your door.

Of course, if you live near one of its unique car vending machines, you can also choose to pick up your car at one of 15 different locations. The spectacle includes dropping an oversized coin into a slot and watching the new used car wending its way down the glass-enclosed parking garage. It's a bit of a marketing gimmick, but it helps differentiate Carvana from its competitors.

The benefit of the (mostly) online-only model is it keeps overhead costs lower since it doesn't have a sprawling dealer network. The no-haggle policy may mean it gets lower profit margins on each car sold, but if it catches on it can make up for that in volume.

It certainly seems to be catching on. Revenue more than doubled in 2018 to just under $2 billion as the number of used cars sold rose in nearly the same proportion to 94,000. The gross profits made on each unit sold rose 35% to $2,090.

Carvana has a goal of selling 2 million vehicles a year, or about 20 times more than it does now. If you're feeling generous, you might describe that goal as lofty. Others might call it absurd.

Doubling unit sales is easy when you're small, but growing them exponentially as you gain size is infinitely more difficult, even if the business has been scaled up, and particularly in a hotly competitive environment like the used car market.

CarMax (KMX 0.71%) has been selling used cars for 25 years, or about four times longer than Carvana. It sells about 750,000 cars a year and generates over $4 billion in revenue. It's got more of a dealership model, to be sure, but it also was one of the pioneers of no-haggle pricing, and it achieves a gross profit per vehicle of $3,312. Last year CarMax made a profit of $842 million compared to the $254.7 million loss Carvana posted, a 55% increase from 2017.

Short-sellers are likely shorting Carvana's stock because its valuation has gotten well ahead of its performance. Where Carvana trades at 4.6 times its sales, CarMax goes for just a fraction of its sales at 0.7 times. Even Tesla, which moved to an online-only sales model last month but has also suffered a big hit for missing sales goals, trades for 2.1 times its sales.

According to The Wall Street Journal, over 21 million shares of Carvana stock were sold short. While that's a 12% drop from the prior period, it still amounts to 56% of Carvana's float, or the number of shares outstanding, which puts it third, behind only Yeti and Lannett.

However, that still means Carvana's short interest ratio -- the theoretical amount of time it would take short-sellers to cover their position -- is 14 days. Anything over seven is considered a lot. Should Carvana's earnings report beat expectations, or if any other good news alights on the used car dealer, short-sellers could get caught in a short squeeze and send Carvana's stock soaring. It's why shorting is a risky game to play.

It would seem those shorting Carvana's stock believe the underlying business doesn't yet justify the valuation. Although they could be right for the near term, the used car dealership still has plenty of room to scale up. Despite some wild-eyed goals for the future, Carvana may be a business you don't want to bet against over the long haul.

Is Carvana Repairable, or Headed to the Junkyard?

Bull vs. Bear: Who Wins With Carvana?

Down 93% This Year, Is Carvana Finally a Buy Now?

Are the Carvana Shorts in Danger of Being Crushed?
376%