The largest movie-theater operator in the world aims to dispel the myth of the demise of moviegoing.

AMC Entertainment (AMC 6.99%) recently hosted its investor day for shareholders and offered an overview of the company's growth plans. The largest theater operator in the world has seen its stock languish at levels around half of where it traded as recently as early 2017, when the company acquired three other theater chains -- Carmike, Odeon (in western Europe) and Nordic (in northern Europe).

A lackluster 2017 box office, combined with a large debt load, drove AMC stock down that year, but while the domestic box office bounced back to an all-time high in 2018, AMC stock is still languishing:

There are a lot of moving parts at AMC. The company has sold off non-core assets and has invested heavily in luxury recliner seating across its theater footprint. That has made the company's current financials look ugly, but these figures mask AMC's real profitability.

AMC's investor day attempted to clarify some of these points.

Though the box office can fluctuate from year to year, the general slope is slightly up, with flattish attendance and pricing just above inflation. That has allowed the domestic box office to grow at a 2.4% CAGR (compound annual growth rate) over the last 20 years, despite the advent of DVDs, premium cable TV, and streaming.

Long term, AMC believes the industry will continue to grow about 2% to 3%, and AMC believes it should outperform that rate by one to two percentage points, for a growth rate between 3% and 5%. That won't be consistent growth with the industry's ups and downs, but it's an average long-term target.

AMC is confident it can outgrow the industry because of its first-mover advantage in luxury recliner renovations, its tech leadership, and the recent success of its new Stubs A-List Program, which we'll get to in a minute.

In addition, AMC believes this above-market growth will allow it to expand adjusted EBITDA (earnings before interest, taxes, depreciation and amortization) margin to between 17% and 19%. Last year, AMC achieved an EBITDA margin of roughly 17%, the low end of that range, so there could be an even bigger jump in profitability should management's plan work out.

Part of the profitability should come from the company's new A-List subscription program, which is turning out to be a bigger success than even management anticipated. It was introduced only in July of last year, but management has updated current subscriber numbers to over 750,000, up from 600,000 at the end of 2018. Not only are those membership numbers well ahead of plan, but usage continues to come down as well, which is good for the program's profitability (lower usage on a flat subscription fee equals greater profit). 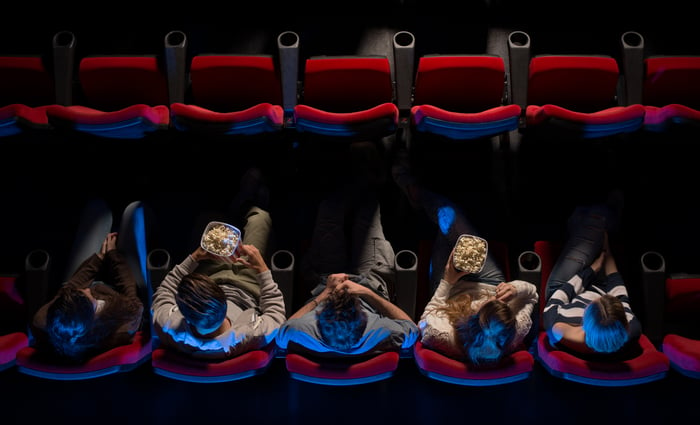 Capital spending to come down and go overseas

While the company has been spending heavily over the past few years, management also sees its recliner renovations decreasing. After spending a whopping $643 million in 2017 and $589 million in 2018 on capital expenditures, management projects this figure to fall to between $300 million and $350 million annually over the next three to five years. About $150 million of that is maintenance capex. Assuming the company eventually completes its growth spending, AMC would only need to spend about $150 million in capex, with the extra few hundred million falling to the bottom line.

The reason for the lower capex is that AMC has nearly completed its theater renovation program in the U.S. Management says it's now 75% complete with the U.S. footprint; however, AMC is only about 15% done in Europe, so the majority of new renovations will be there. That could help the company's European segment, which lagged the U.S. last year.

The good news for shareholders is that European renovations are currently getting a return on investment above 50% -- even higher than the over-25% returns seen in the U.S.

One of the big overhangs on AMC stock has been its net debt load, which currently resides at almost $5 billion, or about 5.5 times EBITDA. Despite this high figure, AMC hasn't paid down any significant debt in the last two years; instead it chose to invest in recliners and even share repurchases. However, with the investment cycle coming to a close, the company now plans over the next three years to achieve a net-debt-to-EBITDA ratio of between 3.5 and 4.5, with a longer-term target of 3 times EBITDA.

That will require some work, and likely include both debt repayments and EBITDA growth. Still, with AMC's recent refinancing pushing no maturities until 2024, the company will have lots of time to work this debt load down to its target level.

During the question-and-answer session, an analyst asked management about premium video on demand (PVOD), which might shorten the exclusive theatrical window before movies become available for digital download. This has also been an overhang for theater operators, as such a move could limit enthusiasm for going to the movies.

However, that threat -- which received much attention in 2017 -- is basically dead, for a couple of reasons. First is that AMC, as the largest theater operator, has a lot of negotiating power with studios that need wide theatrical distribution. Second, as CEO Adam Aron pointed out, the studio most invested in the status quo -- and thus not interested in shortening the theatrical window -- is Walt Disney. Disney is not only the most successful moviemaker in recent years with about 40% market share, but it also just bought Fox, consolidating the studios even further.

Finally, box-office receipts bounced back in 2018, which is yet another reason not to upset the apple cart.

Q1 may be bad, but the rest of the year looks good

While AMC didn't give guidance for its first-quarter results, which will be released in the coming weeks, most investors are aware that the box office was down considerably in the first quarter. That's due to a relatively lackluster movie slate, with no Star Wars released in late 2018 and no answer for last February's monster hit Black Panther.

However, management seems pretty confident in the rest of the year. Avengers: Endgame, which hits theaters on April 26, recently set a new first-day presale record -- it's just one of many highly anticipated releases this year, including Aladdin, another Star Wars chapter, and sequels to other successful films, including Toy Story 4, Jumanji: The Next Chapter, and The Secret Life of Pets 2. Aron even predicted that this year's box office could exceed last year's record, despite the slow start.

Should the box office bounce back this year to 2018's level or beyond, AMC looks primed to benefit. Some observers think moviegoing is in structural decline and that AMC is a value trap. But at less than 6 times adjusted free cash flow, the stock could be a total bargain, should management's projections prove accurate.