If you are looking at the defense sector, Dividend Champions General Dynamics and United Technologies are great options. But is one better?

General Dynamics (GD -1.05%) and United Technologies (RTX -1.94%) are both members of a highly exclusive club: They are Dividend Champions. That means they've increased their dividend annually for at least 25 consecutive years -- a feat few companies manage to achieve. That should put these two on the radar of any investor looking to own a defense stock. But is one of these two Champions a better option today?

General Dynamics and United Technologies both sell to the U.S. military. This business, largely speaking, has one main customer: the United States government. Even when a defense company sells its wares to foreign countries it has to get approval from Uncle Sam before doing so. From a customer standpoint, then, defense operations don't have much diversification. 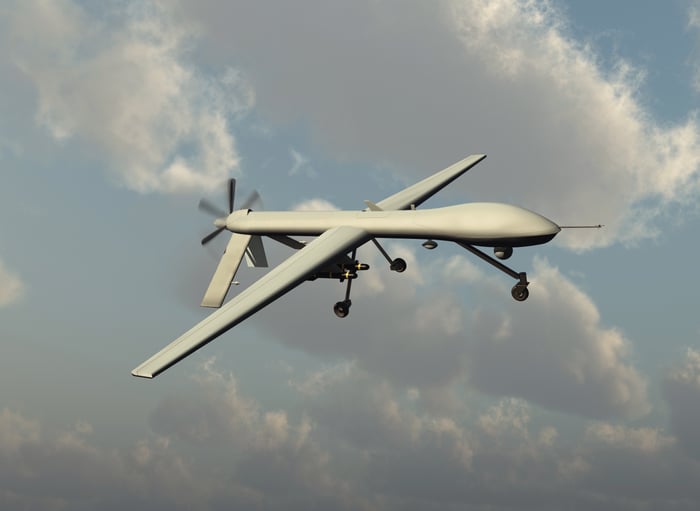 That said, military sales make up roughly 75% of General Dynamics' revenue, with the rest of the top line dedicated to its aerospace division, which sells business jets. The company's defense business covers a lot of ground, including things like tanks, submarines, and information technology systems and services. But the government is easily General Dynamics' largest customer and the biggest driver of financial results.

United Technologies is a bit different. Its defense operations are largely related to its military aerospace business, but that accounts for only about 15% of the top line. That said, it just bolstered this division with its recent $30 billion purchase of Rockwell Collins. The rest of the company is dedicated to commercial aerospace operations (around 40%) and commercial and industrial sales (Otis elevators and Carrier heating and air-conditioning systems, the remainder).

But here's the interesting thing. United Technologies plans to break itself into three parts: an aerospace business, which will retain the United Technologies name, as well as Carrier and Otis. That will take what was 15% of the business and turn it into nearly 30% once the separations are complete, a much more material figure, though still lower than General Dynamics. Notably, however, United Technologies will only be selling into the aviation space.

It's hard to call one company a winner here. General Dynamics is a purer play on the military space. United Technologies, meanwhile, will, after breaking itself apart, end up focused on the aviation market, with a material military component. It will have a more diverse set of customers because of its commercial aviation business, but it will still lack diversification, since it will be completely focused on aviation. That said, if you buy before the break (not expected to be completed until 2020), you'll end up with Otis and Carrier, two material and well-respected businesses in their own right. You can argue that this increases your diversification, but if you are looking for exposure to the defense sector, you'll probably want to sell them. Let's call this a wash.

United Technologies' price-to-sales ratio is currently around 1.6 times, roughly in line with its five-year average. Its price-to-earnings ratio is a little under 21, a bit higher than its long-term average of around 20. Price-to-cash flow is roughly in line with its five-year average, while price-to-book value is a touch below the average. All in, United Technologies looks fairly valued today. To be fair, you can argue that the company's breakup will unlock value, but it's not exactly clear that additional value will be realized. So, taking a conservative approach, it's probably best to consider it fairly valued today. 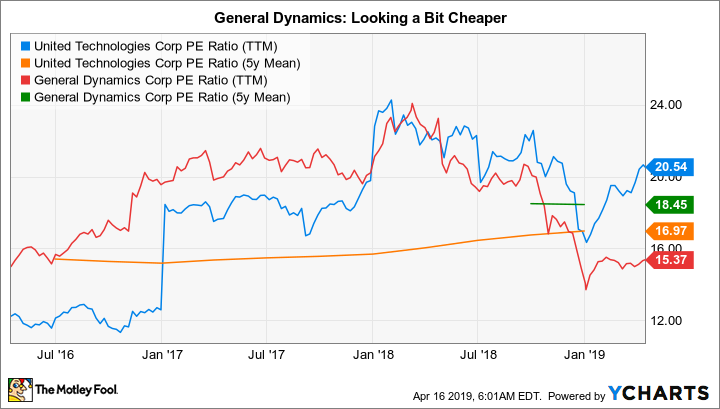 General Dynamics' P/S ratio is around 1.4 times compared with a five-year average of 1.65 times. The P/E is about 15.5 compared with a five-year average of nearly 18. Price to cash flow is currently at nearly 16.5 times versus a longer-term average of 19 times. And the P/B ratio is roughly in line with the longer-term average. On the whole, General Dynamics looks like the better relative bargain today.

General Dynamics is projecting 2019 sales to grow roughly 6%, with operating earnings flat to up around 1%. That's not great, but 2018's results were quite strong. United Technologies is looking for its business to provide organic sales growth in the 3% to 5% range, with adjusted earnings up between 1% and 5%. Again, not incredible, but a little better than what's expected at General Dynamics.

Breaking the numbers at United Technologies down a little, however, provides a little more insight. Otis and Carrier are expected to see top-line growth only in the low- to mid-single digits. The company's aerospace business, which includes its military operations, is projected to see mid- to high-single-digit growth. In other words, the aerospace operations look like the crown jewels.

While this one ends up a slight edge to United Technologies, neither company is going to light your world on fire in 2019 if the current projections play out as planned.

4. A look at the dividend 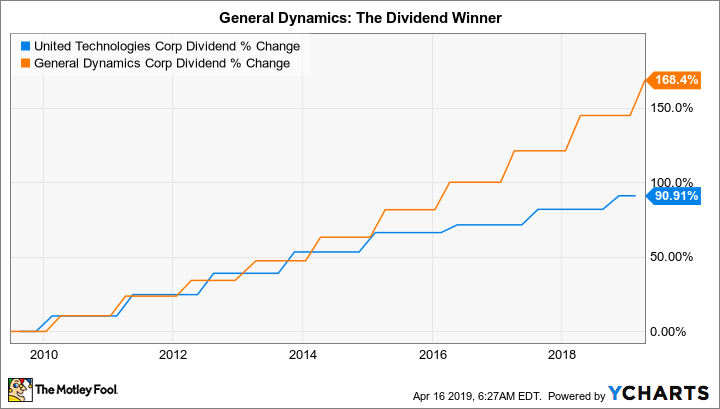 5. A look at leverage

On the balance sheet, meanwhile, debt makes up about the same amount of each company's corporate structure (50% or so). However, General Dynamics' debt to EBITDA ratio, a measure of leverage, is 1.9 times compared with United Technologies' 2.8 times. While neither company looks particularly overleveraged, General Dynamics looks like the less leveraged of the duo. 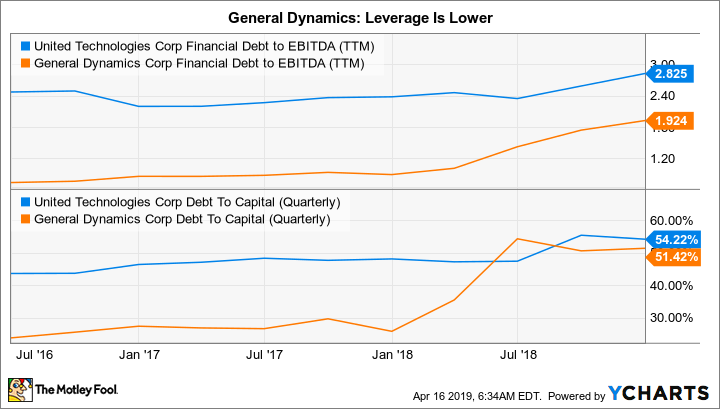 Overall, General Dynamics appears to be the better option here when you consider it has a clear edge with regard to valuation, dividend yield and history, and leverage. Although projected growth in 2019 won't be quite as good as what United Technologies is calling for, investors appear to have already priced in those prospects at the company. But General Dynamics, the purer play on military exposure, looks like the better investment option if you are seeking to add some exposure to the defense sector from the list of Dividend Champions.

Want to Beat the Dow Jones? Buy and Hold This Growth Stock
366%