Please ensure Javascript is enabled for purposes of website accessibility
Log In Help Join The Motley Fool
Free Article Join Over 1 Million Premium Members And Get More In-Depth Stock Guidance and Research
By Lee Samaha - Apr 21, 2019 at 10:03AM

The e-commerce giant's entry into the industrial-supply market appears to have curtailed margin at traditional companies -- which is bad news for the industry's valuation.

There's no end of discussion regarding the potential of Amazon.com (AMZN 2.57%) to eat the lunch of almost every industry it touches. Not all of it is accurate.

However, the U.S. industrial-supply wholesaler market has definitely been feeling the heat of online competition, with companies like MSC Industrial (MSM 0.23%), Fastenal (FAST -0.60%), W.W. Grainger (GWW -0.58%) and WESCO International (WCC 1.48%) experiencing margin pressure in recent years. But just how significant is it, and should it change the investment thesis around the stock?

Margins across the cycle

In a nutshell, the answers to the questions above are "very" and "yes." Here's why.

Let's start by looking at the chart below. As you can see, over the long term, the operating margins of industrial-supply companies have tended to follow the trend of U.S. industrial production. 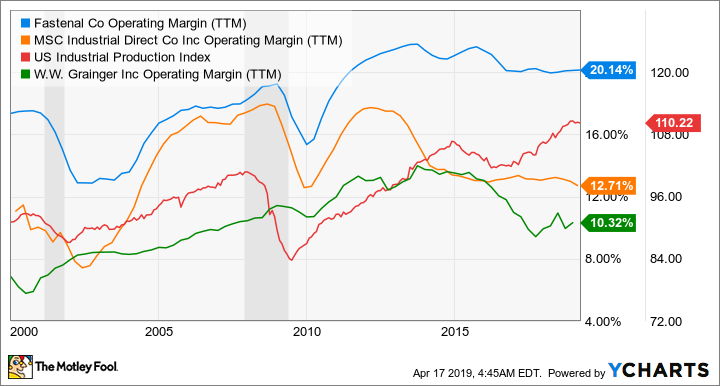 As the industrial economy improves, the supply companies grow sales, and then operating margin leverage kicks in; the opposite occurs when a downturn is in place. You can see this pattern in the upswing from 2002 to 2008, the downswing from 2008 to mid-2009, and another upswing from mid-2009 to 2015.

However, if you look closely at the chart, you can see the recovery in industrial production that started in 2016 hasn't been accompanied by an increase in margin. In fact, the margin trend of companies in the industry has been downward, with companies like WESCO repeatedly struggling to generate margin expansion. Part of that is due to rising material costs, but there's no doubt that Amazon's expansion in the industrial-supply sector has forced traditional companies to adjust their strategies.

As industrial-supply companies are highly cyclical, it makes sense to look at their revenue and operating margins over a cycle, rather than just look at one or two years' worth of isolated data. So here's a look at the average margin over two cycles. For reference, the data is taken from peak margin to peak margin -- which naturally correlates with the direction of growth in industrial production.

The chart shows a clear deterioration in 2015-2019 compared to 2008-2015 for MSC Industrial and Grainger; the comparison gets worse if you consider that the 2008-2015 period includes the deep recession of 2009. Fastenal has done much better, but this is largely because it expanded onsite location sales and vending machines.

Fastenal has been able to deal with margin pressure by shifting its sales mix to higher-margin revenue streams. The deeper question is: What would Fastenal's margin be without pressure from Amazon? 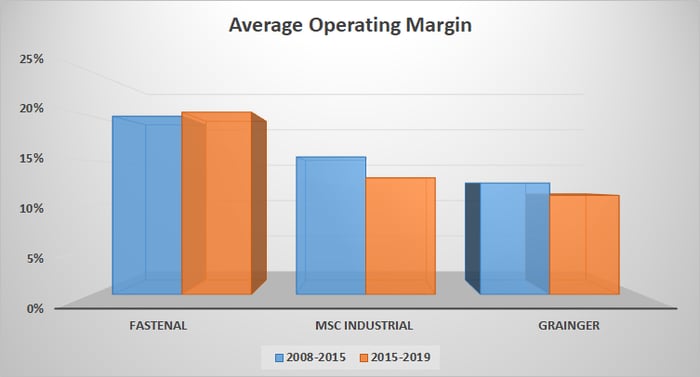 The impact of Amazon on industrial-supply companies

Operating margin at MSC Industrial and Grainger across the last cycle is around 13% lower than it was in the previous cycle. Of course, if the long-term margin in an industry is lower by 13%, then assuming valuations (market cap to earnings) are consistent, revenue would have to rise by nearly 15% across comparable cycles, just to keep the market cap (share price) constant.

The pressure on share prices is obvious, and it's why the only company that's come close to the return of the S&P 500 since 2015 is Fastenal. It's a good stock performance, but consider that Fastenal has had to execute very well on an operational basis just for its stock to keep pace with the S&P 500 index: 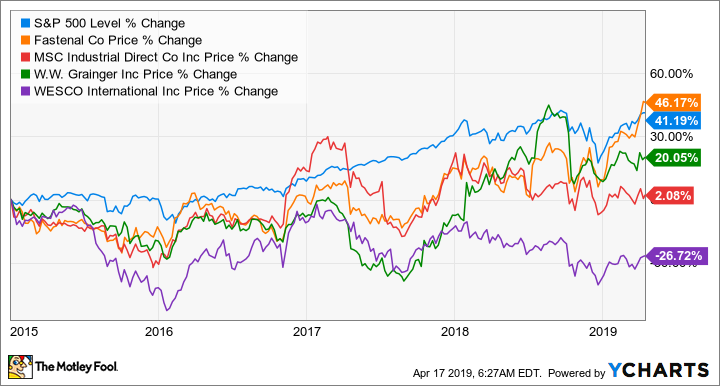 For a rough estimate of how much Amazon may have reduced value in the industry, consider that the highly fragmented industrial-supply industry is seen as having a current combined revenue of $74 billion. A rough approximation of a 12% operating margin across the cycle produces an earnings figure of around $9 billion. Assigning a market multiple of 15 times earnings would give companies in the industry a current market cap of around $133 billion.

Of course, if margin and earnings weren't 13% lower than in the previous cycle, then the estimation of industry market cap could be around $153 billion, or $20 billion higher than it is now. All told, you could argue that this is how much value Amazon's entry into the industry has cost its traditional players in terms of market valuation. 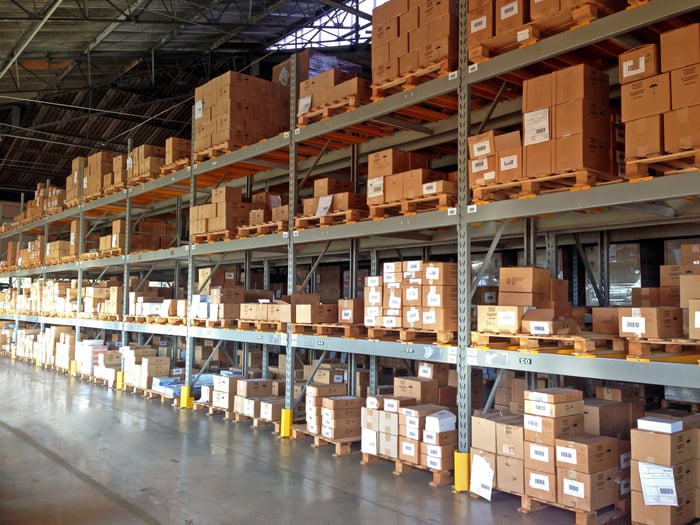 If the thesis holds that online competition from Amazon (and others) is causing margin decline across the industry, then investors should focus on companies consciously making efforts to deal with these pressures rather than pretend they don't exist. For example, Grainger has made efforts to cut prices and expand its own online offerings.

Alternatively, investors could buy shares in companies benefiting from the shift toward e-fulfillment, such as warehouse automation stocks.

Whichever way you look at it, Amazon's entry in the marketplace is a game-changer, and investors should think differently about how to invest in the sector.