A big jump in March looks ominous, but should investors worry?

No one wants to pay more for the things they need, but over the years, inflation inexorably causes the prices of most things to go up. Even with the relatively benign inflation levels that the U.S. has seen over the past 30 years, the Consumer Price Index (CPI) has doubled since the late 1980s, and prices of certain categories of goods and services have gone up a lot more than that.

After several months of nearly stagnant readings, the most recent monthly data on the CPI showed a 0.4% jump. That was the biggest gain in more than a year, and it has some people worried about whether a return to sharper inflation is imminent. 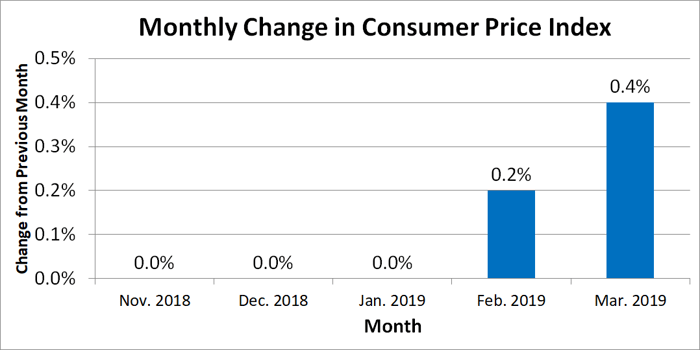 However, the big problem with using the CPI as an indicator of changing trends is that it tends to be volatile. In particular, the costs of food and energy products typically vary widely from month to month, and the most recent data from March included price increases in both of those categories. Specifically, a continued surge of 6.5% in gasoline prices helped contribute to a 3.5% boost to the energy component of the CPI. Food prices were up a more modest 0.3%, but that still contributed to the above-average monthly gain.

Two other inflation readings should give you more comfort about the current situation. When you take out food and energy, the CPI picked up only 0.1% in March, which is consistent with past readings of benign inflationary conditions. Moreover, even including all items, the CPI is up just 1.9% over the past 12 months. Even if prices at the pump keep picking up heading into the summer months, there's no reason yet to be worried about a large-scale return of higher inflation over the long run.