Macau was the highlight of the first quarter, and the mass market led the way.

The gaming industry is no longer the growth machine it was after the recession a decade ago. Macau has entered a more mature phase, and very few new gaming markets have emerged.

Amid the slowdown, Las Vegas Sands (LVS 4.88%) continues to churn out cash. When one market declines, another steps in to fill the slack, and the industry's biggest gaming stock continues to hold up to the competition. 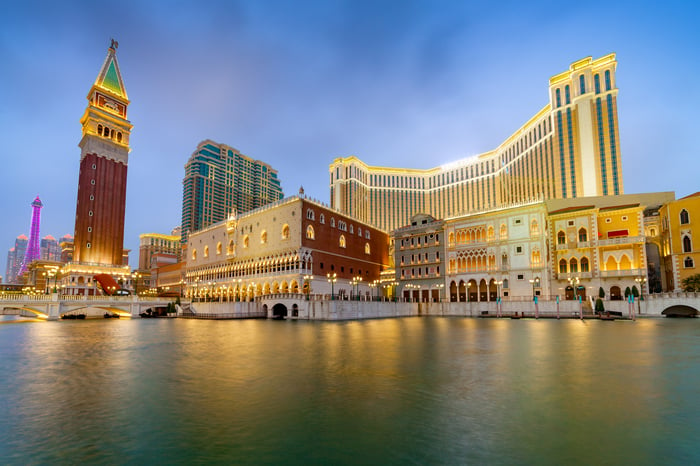 Gaming investors may be more interested in property EBITDA, which is a proxy for cash flow coming from gaming resorts. A decline of 3.2% in EBITDA to $1.45 billion was a bit concerning, but when you consider competitive pressures it does make sense.

Las Vegas Sands can be viewed in terms of three segments: Macau, Singapore, and the U.S. That's how I'll analyze results.

In Macau, total revenue was up 8% to $2.33 billion, and net income was unchanged at $557 million. This compares to a 0.5% decline in Macau's gaming revenue overall, so Las Vegas Sands is holding up well. The performance is particularly impressive when you consider that MGM Resorts (MGM 2.79%) opened MGM Cotai next to Sands Cotai Central last year, which could have stolen a significant number of customers.

Strength was widespread, with Venetian Macau, Sands Cotai Central, Parisian, and Four Seasons all growing revenue versus a year ago. Sands Macau saw a 1.3% revenue drop to $152 million, but that's a small fraction of the company's revenue.

Las Vegas Sands' strength isn't a coincidence considering the company's focus on the mass market. The company estimates that mass market gaming win was up 9% in the first quarter to $5.4 billion, the most ever in Macau.

Marina Bay Sands was the one disappointing area for Las Vegas Sands, with revenue down 12% to $767 million and property EBITDA down 21.8% to $423 million. Bad luck played a roll in the results, but even on a hold-adjusted basis EBITDA would have been down 5.4%.

In Las Vegas, revenue fell 1.3% to $471 million and EBITDA was down 2.1% to $138 million. The Las Vegas properties are fairly steady long-term, and given their small percentage of revenue overall they shouldn't be the first thing investors concern themselves with.

The big discussion during earnings was the $3.3 billion expansion of Marina Bay Sands. The new tower will include 1,000 new suites, an arena, more MICE space, and retail. More importantly, it comes with an extension of exclusivity in the gaming market through the end of 2030.

On the downside, beginning on April 4, 2019, the levy for locals entering the casino was increased 50% to S$150 daily. This could deter some people from gambling, or leave less in their pockets when they enter. The tax rate on casino revenue will also go up beginning on March 1, 2022, as part of the overall agreement, including an increase from 15% to 18% in tax for the first S$3.1 billion of gaming revenue and 22% above that. Premium tax rates go from 5% to 8% for the first S$2.4 billion and 12% above that.

Las Vegas Sands is about as steady as a gaming company gets, and will ride the growth in the gaming market in Macau and Singapore. While I think the expansion going into Singapore is a high price to pay, it's worth it given the amount of money being made from Marina Bay Sands. To me, the real reason to own Las Vegas Sands shares is now the $3.08 dividend that's expected to be paid in 2019, a nice 4.5% dividend yield from a cash flow machine in the gaming industry.