Investors stub out Altria after its earnings miss.

Altria earned $0.60 per share in Q1. The company says that if adjusted for one-time items (i.e., pro forma), it actually would have earned $0.90 per share -- but even that was short of the $0.92 per share in pro forma profits that Wall Street had projected. Sales net of excise taxes were $4.4 billion, down 6% year over year and also short of Wall Street forecasts. 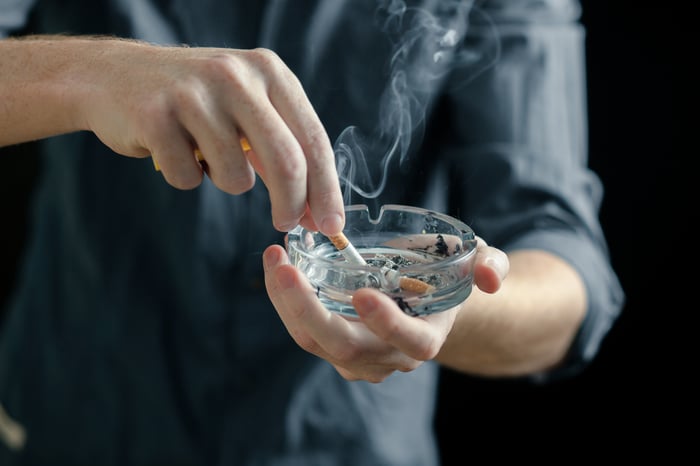 Viewed from the perspective of GAAP accounting, Altria's numbers were arguably even worse. Reported earnings per share of $0.60 declined 40% in comparison to last year's Q1. Net revenues (which include collection of excise taxes) declined 8% to $5.6 billion.

Altria noted that shipments of traditional cigarettes declined 14% year over year, faster than expected. One of the moves the company is making to offset this trend of declining tobacco sales is a $1.8 billion investment in marijuana firm Cronos Group (CRON 1.95%), which the company says it completed during the quarter. Management noted that it now has a "45% economic and voting interest in Cronos with a warrant, if exercised in full, to acquire an additional 10% equity stake" -- which would give it majority control of a second new and growing business alongside its minority stake in the JUUL vaping company.

Although investors were disappointed in the quarterly numbers, Altria says its expectations for the year as a whole remain intact. Management reaffirmed full-year 2019 guidance for pro forma profits of between $4.15 and $4.27 per share. Taken at the midpoint ($4.21 per share), that means that despite disappointing investors in the year's first quarter, it still intends to earn more than Wall Street's expected $4.19 per share before the end of the year.

If Altria delivers on that promise, investors who sold the stock today may wish they hadn't.