Boston Beer shipped a lot of beer to start the year. But could this sap future sales?

Shares of Sam Adams-brewer Boston Beer (SAM -0.25%) jumped more than 10% early Thursday after reporting earnings after close of trading on Wednesday, and closed the day still up 8.5%.

Expected to earn $1.01 per share on $235 million in sales in Q1 2019, Boston Beer actually earned $2.02 per share on sales of $252 million, "beating earnings" soundly and winning a round of applause from investors. 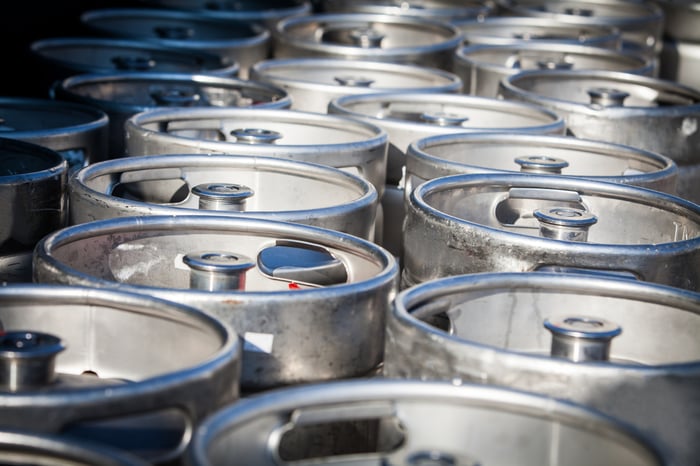 Q1 sales climbed 32% year over year, and profits were up an even more astounding 159%. Management noted that the huge increase in sales was tied to a "planned acceleration in the timing of shipments during the year to support current and anticipated growth in demand."

This would seem to suggest that Boston Beer front-loaded its sales this year and that sales later in the year won't show the same growth momentum. However, management also reiterated its guidance for the rest of this year -- essentially reassuring investors that guidance is still safe.

Although management cautioned that "actual 2019 earnings per share could vary significantly from the current projection," it's still sticking with its prediction that full-year earnings will range from $8 to $9 a share, diluted. Management further predicted a strengthening in gross margin from the 49.5% enjoyed in Q1 to 50% -- or even 52% -- over the course of the full year.

All that being said, when taken at the midpoint, Boston Beer's guidance of about $8.50 per share looks like it could come up short. Wall Street is predicting $8.57 in profit and $1.1 billion for the full-year's revenue.