April has been a busy month with a flood of earnings reports for U.S. companies. That constant flow of information can make it tough to track the top stocks to watch, so a trio of our Motley Fool contributors are cutting through the noise and highlighting three key companies to follow: Apple (NASDAQ:AAPL), VEREIT (NYSE:VER), and FireEye (NASDAQ:FEYE).

Leo Sun (Apple): Apple reports its second-quarter earnings on April 30. The most closely watched metric will be its iPhone sales, which tumbled 15% annually last quarter but still accounted for 61% of its top line. 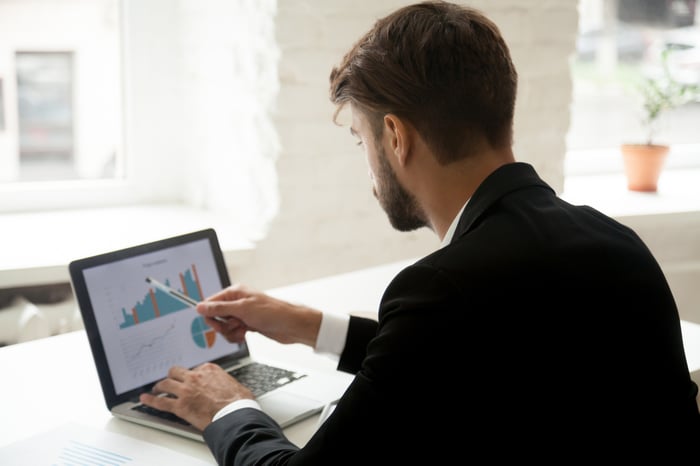 Sales will likely decline again, due to soft demand for the newer iPhones and tough competition in China. Apple will likely discuss the future of its 5G iPhones following its settlement with Qualcomm, but analysts still don't expect to see the device until 2020.

Investors will also be keeping a close eye on Apple's services revenue, which rose 19% annually last quarter and accounted for 13% of its top line. Apple's long-term plan is to expand its higher-margin services business to offset the slower growth of its lower-margin hardware business.

Last quarter, Apple reported that its services business had a gross margin of 62.8%, compared to a gross margin of 34.3% for its products business. However, the introduction of new services like Apple News+, Apple TV+, and Apple Arcade could weigh down the unit's long-term margins.

Investors should also see if newer products, like the Apple Watch, AirPods, and HomePod, are diversifying its hardware business away from iPhones, iPads, and Macs. The performance of those devices should give us insights into the broader markets of wearables and smart speakers. Apple rallied more than 30% this year as investors warmed up to the stock again, but we'll have to see if its earnings can support that bullish momentum.

Reuben Gregg Brewer (VEREIT): VEREIT, a U.S.-focused real estate investment trust (REIT) with nearly 4,000 properties, is offering investors a robust 6.5% yield with a strong projected coverage ratio of 80% in 2019. That yield, meanwhile, is well above what peers like Realty Income (NYSE:O) and National Retail Properties (NYSE:NNN) have to offer. 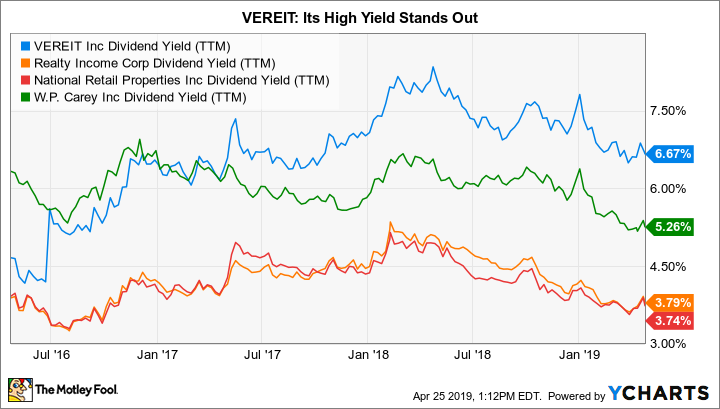 The problem is that VEREIT is dealing with a legal mess related to an accounting error that occurred under previous leadership. The old team had an aggressive acquisition expansion mind-set that ultimately caught up to it. The new crew, led by industry veteran Glenn Rufrano, has chosen a different direction, streamlining the portfolio, strengthening the balance sheet, and making a once-opaque business increasingly transparent (which included selling a business that created and managed non-traded REITs). At this point, VEREIT is really just a boring company with a big yield -- except for the lingering lawsuits.

Even here, however, Rufrano and his crew have made progress. They have settled with investors that own roughly a third of the shares for around $250 million. Assuming the costs are about the same for the remaining investors, the total cost will come in close to the $1 billion mark. Although that's a big number, VEREIT has more than that available on its revolving credit facility. So it should be in good position to handle the legal issues and keep rewarding investors as its turnaround progresses. For those willing to take on a little more risk, VEREIT is a great U.S. income story.

Steve Symington (FireEye): When FireEye announced better-than-expected fourth-quarter 2018 results in early February, it was surprising at first to see the stock plunge 12% the following day in response. After all, the cybersecurity leader had not only seen its number of customers climb 19% year over year, it also boasted of "strong" follow-on purchases from existing clients and maintained an enviable customer-retention rate of 90%. What's more, recurring revenue continued to soar, with subscription and support billings climbing over 20% last year and accounting for 82% of nonservices billings for all of 2018.

However, FireEye also told investors to expect full-year 2019 revenue of $880 million to $890 million, or modest growth of 6.5% at the midpoint, while the market was looking for sales near the high end of that range. Management subsequently blamed this seemingly underwhelming outlook on deferred revenue headwinds, given the timing of a couple larger deals recognized in the first half of 2018 that likely won't recur -- and without which FireEye would have been targeting growth of closer to 10.5% this year.

But with the company's first-quarter 2019 call coming up on April 30 -- and given its recent habit of exceeding expectations -- I think investors should be watching closely later this month to see whether FireEye's conservative view of the year ahead still holds.