After several years of falling sales due to foodborne illness outbreaks, Chipotle Mexican Grill (CMG 2.27%) began to rebound in late 2017, right around the time of its first sponsorship of esports organization OpTic Gaming with teams that compete in Call of Duty, Gears of War, and more. It subsequently partnered last May with Team SoloMid for its Fortnite play.

Since those first forays into esports, Chipotle's stock has more than doubled in value and today trades at around $700 per share. Coincidence? I think not!

Perhaps esports isn't solely responsible for Chipotle's turnaround, but the partnerships help fulfill CEO Brian Niccol's promise to change the story about the Mexican food chain and how it communicates with and connects to consumers. Like so many other evolving chains (think: Dave & Busters) Chipotle is no longer just a fast-casual restaurant, but a lifestyle brand beyond just food. 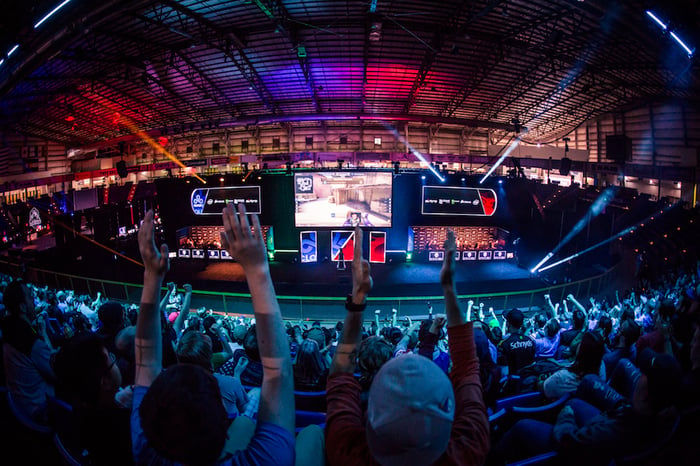 Most people likely figured Niccol would just upgrade Chipotle's menu and improve the restaurant chain's social media aptitude, much as he had at Taco Bell. And while marketing was one of the first challenges he tackled at the chain, esports may actually be the more visible manifestation, since the teams and their millions of followers are already very active across social media platforms.

Chipotle recently announced partnerships with esports festival and competition organizers DreamHack and ESL that cater not only to the thousands of professional and amateur gamers, but also their fans and followers alike. The new partnerships include:

Esports is arguably one of the fastest-growing social phenomena, and eMarketer estimates viewership will grow by 52.5% between now and 2023, reaching 46.2 million. U.S. ad spending on esports streams is also expected to increase by 20% in 2020, growing from $178.1 million spent this year to $213.8 million next year. It's no NFL, which regularly fetches north of $2 billion in ads each season, but its rapid growth cannot be ignored.

Chipotle is not the only restaurant chain interested in tapping into esports, with a number of them also jumping on board sponsoring teams or leagues, including Arby's, Jack in the Box, and Jersey Mike's Subs. Buffalo Wild Wings is also sponsoring teams while incorporating an esports MVP Room into its newest designs.

From Nike to GameStop, it's recognized that esports is the next big opportunity to get your brand out in front of a valuable market. And the reason for the intense interest is the lucrative potential of the demographics. Emarketer says "esports viewers tend to be loyal, tuned-in, digitally savvy, and more affluent than the average consumer. The trick is learning where, when, and how to reach them."

Looking for the payoff

Chipotle says gamers already tend to be fans of the restaurant, and CMO Chris Brandt said the partnerships allow the Mexican food chain "to become even more ingrained in the esports community. This sponsorship provides the perfect platform to directly engage new and longtime loyal Chipotle fans on-site and online, and we are excited to recognize and reward possible up-and-coming talent in the space."

ESL and DreamHack regularly host popular events and festivals, so aligning itself with the industry and during events could be an effective marketing tool.

Nicole noted after Chipotle's first-quarter results the other day, "This is the fifth consecutive quarter of accelerating comps, which reinforces our view that when we connect with guests through culturally relevant marketing focused on Chipotle's great taste and real ingredients, and provide more convenient access with less friction, they respond enthusiastically."

Esports partnerships could be one of the tickets to growth after all.