Yesterday evening after close of trading, Canadian financial holding company Desjardins added fuel to that fire with a trio of new buy ratings for all three of these stocks. According to the analyst, a share of Hexo stock that costs $7.65 today could sell for $10.41 -- a 36% profit in just one year. Aurora Cannabis shares now selling for less than $9 could rise a similar 36% to fetch $12.26. And Canopy Growth -- the most expensive pot stock on the market, with a market capitalization of $17.3 billion and a share price of more than $50 -- could tack on an additional 10% and rise to $55.01.

All three stocks surged this morning as investors got their first chance to trade on the news -- but it's the reasoning behind why Desjardins is predicting this that should worry you. 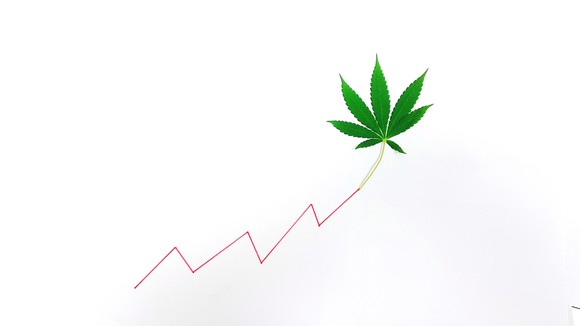 Canadian cannabis sales shot out of the gate after Canada became the first major industrialized nation to legalize recreational marijuana sales in October last year. But as my fellow Fool.com contributor Sean Williams pointed out last month, enthusiasm for legal pot cooled rather quickly, and sales aren't really up to snuff.

From legalization to the close of the year, recreational pot sales at Canadian cannabis stores amounted to just $115 million, implying an annualized rate of sale of just $500 million or so -- a far cry from the $4 billion, $5 billion, or even $10 billion market opportunity that some investors were forecasting.

Why have Canadian cannabis sales failed to measure up? There are a number of factors at play, ranging from the fact that this is a market in its infancy, and pot producers haven't yet had much time to scale up production -- resulting in a supply crunch -- to delays in Health Canada issuing permits to grow, process, and sell marijuana.

And in making its buy recommendations last night, Desjardins didn't ignore this fact. Acknowledging that early marijuana sales data from Canada has been "underwhelming," Desjardins cites production ramp challenges, as well as logistical and distribution issues as obstacles to overcome, in a note covered by TheFly.com.

Nevertheless, Desjardins has decided to recommend HEXO, Aurora Cannabis, and Canopy Growth anyway, arguing that there's still a lot of "hype" regarding the legalization of marijuana in Canada. Furthermore, Desjardins believes the legal marijuana market is a "global" one -- or at least, it will become more and more global as the U.S. and more countries follow Canada's lead and legalize recreational marijuana use within their own borders.

But is that really a good reason to buy?

Of course, there still remains the question of whether "hype" can outweigh the fact that all three of these companies -- Hexo, Aurora, and yes, even market leader Canopy Growth -- are expected to lose money in the first full year of Canadian legalization, according to analysts polled by S&P Global Market Intelligence. Plus, the global profits that Desjardins is anticipating are far from guaranteed.

As Sean pointed out in his March column, in California, legal marijuana sales generated barely half the tax revenue they were expected to in 2018 -- just $345 million when $643 million had been baked into the budget. One of the problems with that thesis: "rampant dried flower oversupply" is driving down prices (and consequently, taxes on sales) in California and other U.S. states that have legalized. This suggests that, even after broader legalization, cannabis companies struggling to earning a profit on marijuana may turn out to be more than just Canadian problem.

To borrow the term from Desjardins: It could be a "global" one.