Investors punished Spirit Airlines stock on Thursday, after the company projected that EPS might increase "only" 40% in the second quarter.

Back in early February, Spirit Airlines (SAVE 1.91%) reported that adjusted earnings per share had nearly doubled in the final quarter of 2018. That represented a sharp reversal from the first half of the year, when EPS was still declining -- despite a significant tailwind from tax reform.

Spirit Airlines' earnings momentum continued in the first quarter of 2019. Moreover, while the carrier's second-quarter guidance was somewhat disappointing, Spirit expects to deliver strong EPS growth this quarter in the face of some short-term headwinds. Nevertheless, Spirit Airlines stock plummeted 9% on Thursday because of the weaker-than-expected outlook. That has created a great buying opportunity for long-term investors. 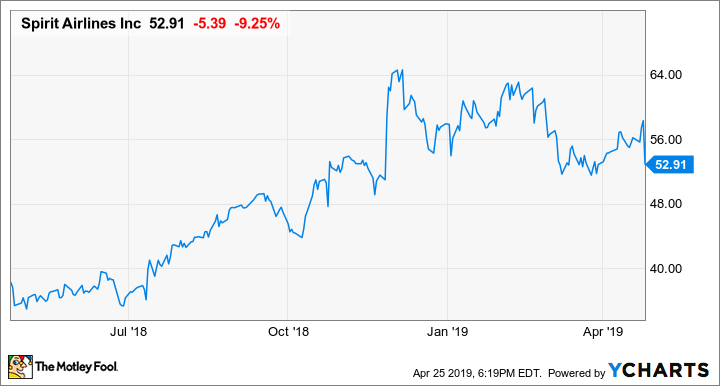 Spirit's initial guidance for the first quarter called for revenue per available seat mile (RASM) to increase 5% year over year. Meanwhile, management expected lower fuel costs to offset most of a projected 2% to 3% increase in nonfuel unit costs. That would have likely enabled the carrier to double its EPS compared to the first quarter of 2018.

Earlier this month, Spirit Airlines modestly reduced its RASM forecast for the first quarter. It also said that its average fuel price had come in somewhat above its initial estimate -- because of a sharp surge in oil prices in recent months -- but that it had used less fuel than expected.

This caused Spirit Airlines' adjusted pre-tax margin to rise to 8.6% from 5.6% a year earlier. Adjusted EPS surged 91% to $0.84, right in line with the average analyst estimate. Looking ahead to the second quarter, Spirit Airlines expects RASM to rise about 5% year over year. While that would be slightly better than the 4.1% increase it achieved last quarter, Spirit faced a roughly 2.5 percentage point unit revenue headwind in the first quarter related to the timing of Easter. Theoretically, the Easter calendar shift should have put Spirit on track to post a huge unit revenue gain this quarter.

However, that doesn't seem to be the case. Spirit Airlines was forced to cancel more than 300 flights over Easter weekend because of severe storms in Florida (the carrier's largest market), hurting unit revenue. Fare weakness in the first half of April will weigh on RASM this quarter, as well.

The flight cancellations last weekend also led to incremental costs for the airline. On top of that, Spirit plans to keep more spare planes and crew members in Fort Lauderdale (its largest base) this summer, to minimize the customer impacts of a major runway construction project there.

The net result is that Spirit expects adjusted nonfuel unit costs to rise about 4.6% in Q2. Fuel prices remain on track to decline year over year in the second quarter, but Spirit Airlines will still face a bigger increase in total unit costs than it did last quarter. The airline's forecast points to adjusted EPS of roughly $1.56 this quarter, up more than 40% year over year but well shy of the average analyst estimate of $1.97.

The analyst consensus for Spirit Airlines' full-year EPS has fallen from $6.62 to $6.08 over the past two months. In light of the company's disappointing outlook for the second quarter, it will almost certainly continue to head lower. Indeed, the Fort Lauderdale runway construction project could have an even bigger impact on Spirit's Q3 earnings than on the current quarter.

Still, even using conservative earnings estimates, Spirit Airlines stock trades for perhaps 10 times its likely 2019 EPS. That's an incredibly low valuation for a company that is growing revenue at a double-digit pace and boosting EPS even faster.

Of course, fluctuations in fuel prices, industry capacity, and one-time events can spoil any single quarter. But over the next few years, Spirit Airlines should be able to keep growing revenue at a double-digit rate while expanding its pre-tax margin by continuing its ongoing route network evolution, refreshing its loyalty program, and upgrading its co-branded credit card program.

If the carrier comes anywhere close to fulfilling its long-term potential, Spirit Airlines stock could fly much higher in the coming years.