In early January, the company issued an updated forecast before its first-quarter earnings report, lowering its guidance by a whopping $5 billion. While the shortfall was the result of several factors, the greatest contributor to the decline was economic weakness in China. The company also faced currency headwinds due to a strong dollar, and an unexpectedly high number of customers availed themselves of Apple's battery replacement program and put off buying a new iPhone.

The company will provide investors with an update this week, as Apple is scheduled to report the financial results of its second quarter after the market closes on Tuesday. Let's recap the company's first-quarter performance and its recent services anouncement to see if it provides any insight into what investors can expect when Apple reports earnings. 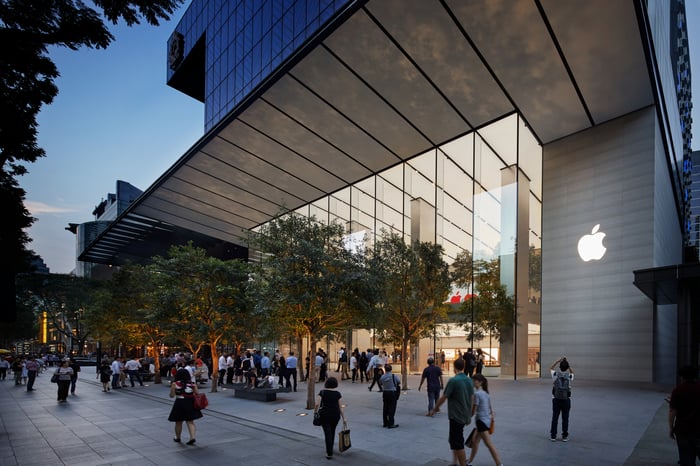 It's still all about the iPhone

For the first quarter, Apple generated revenue of $84 billion, a 5% year-over-year decline (or 3% decline when adjusting for the impact of foreign currency). Even in the face of falling revenue, the company reported record diluted earnings per share of $4.18. That said, the report takeaway was the sliding revenue.

The culprit? A 15% year-over-year decline in iPhone sales. During the conference call to discuss the results, Apple CEO Tim Cook was quick to point out that "over 100% of our worldwide year-over-year revenue decline was driven by performance in Greater China." The company saw these declines across all its product lines in the most populous country.

The news wasn't all bad. Apple reported record services revenue of $10.9 billion, up 19% from the prior-year quarter. The segment was driven by record high results from the App Store, Apple Play, and cloud services. Sales of Macs jumped 9%, while the wearables, home, and accessories segment increased revenue by 33% year over year.

Apple also reported that its installed base of devices grew to 1.4 billion.

Apple hosted a product reveal late last month that detailed several additional offerings to its growing stable of services. Apple News+, which is available immediately, provides subscribers with access to more than 300 magazines and digital subscriptions, as well as access to The Wall Street Journal and Los Angeles Times -- all for $10 per month.

The company will expand its Apple Pay program with the addition of the Apple Card and deepen its foray into mobile gaming with Apple Arcade. These will be available later this year.

The most highly anticipated announcement was related to Apple TV+, the company's streaming TV service. Subscribers will have access to a host of original programming from household names including Oprah Winfrey, J.J. Abrams, Jennifer Aniston, Steven Spielberg, and more. Users will also be able to subscribe to numerous premium channels, including HBO, Showtime, Starz, and others. What Apple didn't divulge is how much the service will cost or precisely when it will launch -- Apple did say it would make its debut later this year.

Each of these will help boost Apple's services revenue, an area of increasing focus -- particularly in light of the declining iPhone sales.

For the second quarter, Apple is guiding for revenue in a range of $55 billion to $59 billion, which would represent a decline of between 3% and 10% year over year. This is the proverbial canary in a coal mine for iPhone sales, since every other major segment -- with the exception of iPhone -- has been growing.

Wall Street sentiment is squarely in Apple's camp. Analysts' consensus estimates are calling for revenue of $57.4 billion, down about 6% and near the midpoint of Apple's guidance, and earnings per share of $2.36, a 14% year-over-year decline.

Some of the issues around China are still present this quarter, but may be improving going forward. Earlier this month, the iPhone maker cut prices in China on a number of its products by as much as 6%, hoping to entice consumers. Since that move happened after the close of the quarter, it likely won't have any impact on Apple's current earnings report.

We'll see if the company can pull out of its China-induced slump when the company reports earnings Tuesday.