One analyst argues the bad news is baked in and sets a "floor" below which shares will not fall.

Last week was a bit of a disappointment for American Airlines (AAL 0.56%) investors. On Friday morning, the airline reported a $0.52-per-share first-quarter profit, $0.01 ahead of Wall Street's consensus prediction, on $10.6 billion in revenue that matched expectations. The modest earnings beat might have been expected to lift American Airlines stock -- but instead it fell more than 1%.

Guidance was probably to blame for that result. American Airlines cut its prediction for full-year 2019 earnings per share from a range of $5.50-$7.50 to a new range of $4-$6. This came as an unwelcome surprise to analysts, who had already been thinking EPS would come in toward the low end of its range ($5.63 was the consensus). Now, however, it seems the company won't even reach that number. At the midpoint of its new guidance range, it will fall far short of the consensus -- so no wonder investors sold off American Airlines.

But here's something that may make you wonder: This morning, analysts at Deutsche Bank reviewed American Airlines' report...and upgraded the stock! 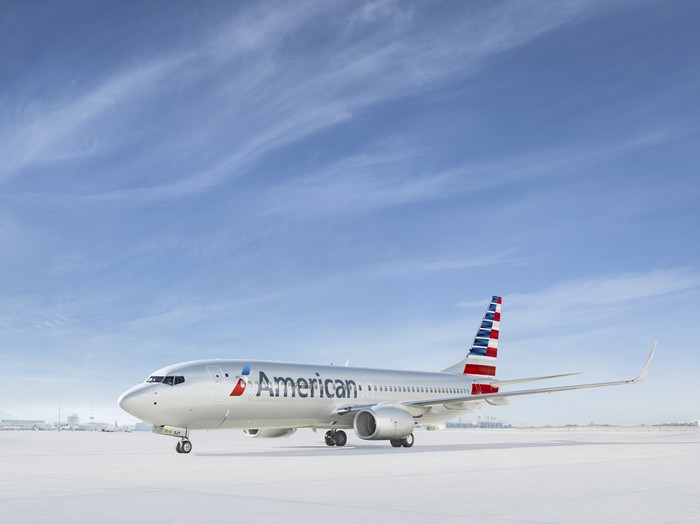 Introducing his company's financial results in a post-earnings call with analysts, American Airlines CEO Doug Parker reassured them that "demand for our product is high." Nevertheless, Parker said the company's near-term forecast has been affected by two major events that are putting a lid on guidance for this year: the grounding of 737 MAX airplanes built by Boeing, and a recent spike in oil prices, which directly translates into higher jet fuel prices.

Let's take those one at a time.

We've covered this story extensively at The Motley Fool already, but here's a brief sketch for those who wish to be brought up to date. On Oct. 29, 2018, a 737 MAX 8 airliner operating as Lion Air Flight 610 crashed shortly after taking off from Soekarno-Hatta International Airport in Jakarta, Indonesia. Five months later, another 737 MAX 8, this one operating as Ethiopian Airlines Flight 302, crashed after taking off from Addis Ababa Bole International Airport in Ethiopia.

In each case, analysts theorize that the crashes may have been caused by faulty sensors feeding bad data to Boeing's new Maneuvering Characteristics Augmentation System (MCAS), which automatically tilts the plane's nose down when it senses the plane is about to stall. Intended to prevent stalls, the malfunction appears to have instead caused crashes.

Air traffic regulators around the world have ordered 737 MAX flights halted, and at American Airlines, this means that 24 Boeing 737 MAX aircraft have been removed from service, resulting in the grounding of "approximately 1,200 flights in the first quarter," according to management. These cancellations have cost American $50 million in pre-tax profits already in Q1, and management believes its MAX-related losses will rise to "approximately $350 million" as a result of "almost 15,000 MAX cancellations" through the 737 MAX's expected return to service on Aug. 19, 2019.

If it takes longer for the Federal Aviation Administration to clear the 737 MAX to fly, those losses could be even bigger.

Worse, Parker predicts that as prices march higher, they could increase fuel costs by $650 million this year -- over and above estimates baked into last quarter's earnings guidance.

So...$350 million in 737 grounding costs, and a further $650 million in higher fuel costs. That's a cool $1 billion in unanticipated costs American Airlines has to deal with this year -- and that is why American had to cut its earnings guidance by a good $1.50 per share last week.

Nevertheless, Deutsche Bank, for one, sees a silver lining surrounding all this bad news.

On the one hand, "American's lowering of its EPS guidance range from $5.50 - $7.50 to $4.00 - $6.00 was not unexpected given the recent rise in fuel prices and grounding of its MAX fleet," writes the analyst in a report covered by StreetInsider.com (subscription required). On the other hand, though, by "resetting ... expectations" toward lower earnings, American may have built in a "floor" undergirding those expectations. At this point, any good news at all -- a reversal in oil prices, for example, or an early fix to the 737 MAX problem, or an ability to raise prices now that's there's less airplane supply on the market -- could enable the company to beat those earnings estimates.

Even assuming all American makes this year is $5 a share (the midpoint of its guidance range), at less than $34 today, the stock is selling for less than seven times current-year earnings -- which could be a bargain if the company can continue growing operating profit at the 9% annualized rate it's averaged over the last five years. Deutsche Bank thinks it's a buy at today's prices, and could hit $40 a share within a year.

And me? Honestly, I'm still worried by the fact that American Airlines has burned cash in each of its last two years (according to S&P Global Market Intelligence), and reported weaker free cash flow than its reported net income for the last five years straight. If you ask me, fuel costs and 737 groundings aren't the only things plaguing this stock. But time will tell whether Deutsche or I am right on this one.

Why Airline Stocks Are Falling Today
356%