Please ensure Javascript is enabled for purposes of website accessibility
Log In Help Join The Motley Fool
Free Article Join Over 1 Million Premium Members And Get More In-Depth Stock Guidance and Research
By Billy Duberstein - Apr 29, 2019 at 8:21AM

Accounting rules are supposed to give investors uniform rules of the road by which to analyze companies. Sometimes, however, rules that attempt to "fix" industries with quirky or lumpy revenues introduce undue complications, missing the original goal and actually making things more convoluted. An example of this happened to Warren Buffett's Berkshire Hathaway last year. New rules state that Berkshire must record unrealized capital gains on its stock holdings as earnings, meaning Berkshire's earnings will fluctuate wildly with the market's moves each quarter, as it's essentially a holding company of other publicly-traded companies.

Another example has unfortunately happened to the cannabis industry. I say "unfortunately" because cannabis is currently a very "hot" industry that may lure excited, yet inexperienced, investors. And yet, this accounting rule could very well lead to a big trap, not only for novice investors, but even the companies within the industry. Here's what the rule is, and why it's so absurd. 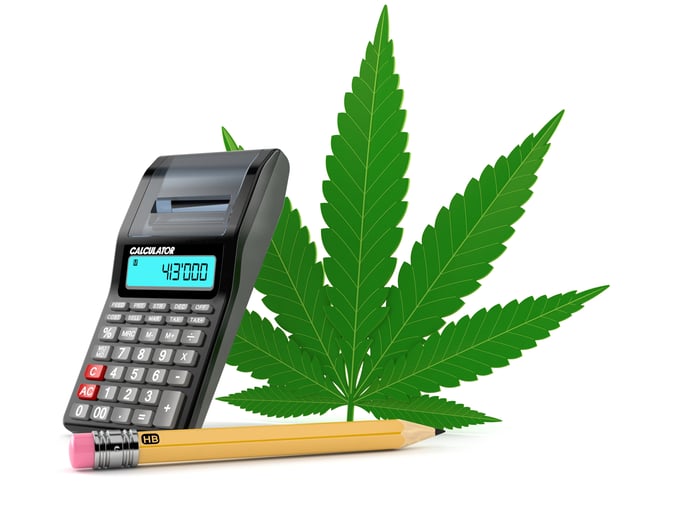 Marijuana accounting can be a drag. Image source: Getty Images.

The vast majority of cannabis stocks and growers are public in Canada, which adheres to International Accounting Standards (IAS). Companies that cultivate marijuana are subject to IAS Rule 41, which applies not only to cannabis growers but also growers of any agricultural asset such as corn or livestock.

The gist is this: As one grows an agricultural asset -- in this case, cannabis -- the plants must be recorded not just as inventory, but as profit at the end of each reporting period -- even before they're sold. As the cannabis plant grows and flowers, companies must record the profit it could fetch at that particular moment, based on the current market price, minus costs to sell. So even though the plant is still really inventory, it's recorded as profit in the income statement.

Of course, what happens when one "actually" sells the marijuana? Well, you can only record profit once, so the company will only be able to record revenue and profit above and beyond what has already been recorded. Basically, some of your past profit now becomes a cost of goods sold.

Why this is insane

So, why is this timing issue so dangerous? Well, cannabis is a commodity, and as everyone knows, commodities can fluctuate in price, which is determined by supply and demand. Traditional commodity industries are cyclical, alternating between booms and busts, and cannabis is no different.

In fact, a "bust" happened at the end of last year, when the price of wholesale cannabis declined between 3% and 53%, depending on which U.S. state you were in. (Cannabis can't cross state lines in the U.S. yet.)

If these busts continue to happen in the cannabis industry, there could future periods where these companies not only can't record new profits but also may have to write down "old" profits recorded in prior periods, should the average selling price fall far enough. In fact, this appears to have already happened to one large producer last quarter.

Canopy: The odd man out (for now)

Here's how these biological adjustments are affecting gross margins at today's leading cannabis growers (All results are for the three months ended Dec. 29, 2018):

Notice that all of the above companies saw an increase in their gross margin after the IAS 41 adjustments, except Canopy.

Not coincidentally, Canopy is also the largest of these companies by revenue. Thus, it could be the case that since Canopy is more "mature," it's now seeing the ill effects from this rule, as its production growth is no longer outpacing price declines. In fact, the company took a $20 million write-off of prior biological assets in the period against current gains, versus zero write-offs a year earlier.

The smaller companies, on the other hand, are still ramping up production, so they are seeing a benefit. But that will continue only as long as production growth outpaces price declines. Otherwise, we could see future write-offs as we did at Canopy.

Adding to the potential for foul play, there is no observable commodity benchmark for cannabis, so all companies have to estimate their average selling prices as a Level 3 asset. That basically means each company has to estimate the fair value of these assets from their own observations of market data. While I'm not saying any of these companies would commit fraud in this way, there is clear opportunity to do so.

And the incentives, too

The really nefarious thing about IAS 41 is that it could actually incentivize companies to produce as much marijuana as they can as quickly as they can when prices are going up since they get to record inventory as profit. However, that would only serve to intensify the oversupply "bust" when it happens.

Of course, smart, long-term oriented producers wouldn't do this, as any crash in prices would have to be reversed in later periods, and any potential pricing fraud would eventually be uncovered.

But that doesn't mean it can't or won't happen -- and there's a very good reason why it could occur, given what's going on in today's cannabis industry.

Pump up the mergers

These days, most large cannabis growers are using their own stock as currency in order to fund a mad dash of acquisitions. Therefore, if you're an executive and know you're going to use your stock as currency, you're probably going to try to get that stock as high as possible in the short term.

What's the best way to pump up your stock? Juice your current profit and growth numbers. What's one way to do juice these metrics? Thanks to IAS 41, it's to grow as much marijuana as possible and be liberally optimistic about the average selling price of your current crops.

I'm not saying any of these companies are engaging in this type of behavior, but it's yet another risk in a long line of others that cannabis investors need to take into account today.