Will the global franchisor accelerate top-line growth this year? The first-quarter report may provide some insight.

Quick-service coffee, doughnuts, and ice cream purveyor Dunkin' Brands (DNKN) reports earnings on Thursday, May 2. As the restaurant industry stalwart continues to position itself as a "beverage-led, on-the-go" destination, can it outpace the moderate revenue growth rate of the last few years? Below, we'll review the company's expectations, as well as a few overarching themes investors should be aware of as we count down to the release.

In 2018, Dunkin' booked a revenue increase of 3.6% to $1.3 billion, mostly from network expansion in its largest segment, the Dunkin' U.S. business, which added 278 locations last year. Store openings compensated for sluggish comparable-store sales growth in the segment of just 0.6%. Total company operating income increased by 5.3% in 2018 to $411.8 million.

In its fourth-quarter 2018 earnings report, management provided a new three-year performance outlook, the most salient points of which include low single-digit "comps" growth for Dunkin' U.S., net franchisee unit growth of between 200 and 250 locations annually in this segment, total company annual revenue growth in the low- to mid-single-digit range, and total company operating income growth in the high single digits.

The Dunkin' U.S. location growth outlook represents curbed expansion from prior years. During the fourth-quarter 2018 earnings conference call, management explained that this deceleration is due to a more rigorous development process that favors "quality over quantity." Dunkin' U.S. is also shuttering suboptimal locations at a faster pace, especially self-serve and other nontraditional formats.

Essentially, management wants to ensure that newer units produce a high cash-on-cash return (i.e., annual store profits divided by cash invested, without factoring in borrowings) for franchisees. On the earnings call, executives relayed that the 2017 cohort of new stores is currently generating a 20%-25% cash-on-cash return for store owners. 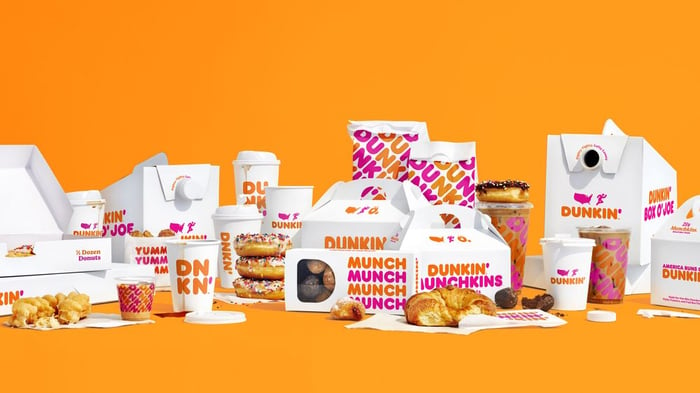 As for 2019, Dunkin' has provided investors with a host of new anticipated benchmarks, including:

Important themes for 2019 and beyond

Whether Dunkin' will be able to generate meaningful revenue improvement this year (and during the three-year outlook period), equivalent to the high end of the anticipated range -- i.e. 5% growth -- depends on the success of several initiatives. For example, Dunkin' U.S. completed a menu simplification project last year, which should continue to speed selling throughput in 2019.

Perhaps more pressing for investors in Thursday's report will be data points on Dunkin' U.S.' entry into espresso drinks late last year. Management's feedback last quarter, 10 weeks into the launch, pointed to initial success. Executives noted that a happy hour limited time offer (LTO) of $2 espresso drinks at 2 p.m. has drawn interest from both loyal customers and those of competitors. Investors will seek further confirmation that the espresso foray can pull significant traffic from coffee rivals Starbucks and McDonald's.

Another important theme for shareholders to track concerns the performance of the company's two international segments, Dunkin' International and Baskin-Robbins International, which together comprised roughly 17% of revenue and 8% of segment profits last year. While these segments carry relatively smaller weight on the company's top and bottom lines, their growth rates exceed that of their counterpart U.S. segments; they're sleeper operations that are gaining more prominence with each quarterly report. Last year, Dunkin' International and Baskin-Robbins International recorded systemwide sales increases of 5% and 7%, respectively, in constant currency terms.

Finally, Dunkin's' potential for growth will also manifest in results of consumer packaged goods (CPG) sales, which are included in "other" revenue in Dunkin's' income statement. Dunkin's' CPG channel, which includes ground coffee and K-cups, expanded retail sales by 5% in 2018. While "other" revenue comprised only about 4% of total sales last year, it's a category that will likely see accelerated growth as early as 2019 -- last year, the company signed four new licensing deals with partners and added 20 new SKUs (stock-keeping units) to store shelves. I'll return to CPG channel growth and the other key themes above in a recap following the release of Dunkin' Brands' report later this week.