Offset the rising cost of education with these three companies.

If you're planning for your kids' future education -- or just looking for great long-term investments -- you may have considered buying shares of a company as a way to generate additional cash in the coming years. Looking at stocks as a way to build wealth and pay for college can be a smart move, but some investors may be asking themselves, "Where do I start?"

If that's you, fear not. We've reached out to three Motley Fool contributors for their thoughts on three companies that can go the distance for your kids' education and your long-term financial goals, and they came back with Visa (V 0.97%), Codexis (CDXS -0.55%), and Alphabet (GOOG -1.24%) (GOOGL -1.02%). Here's why. 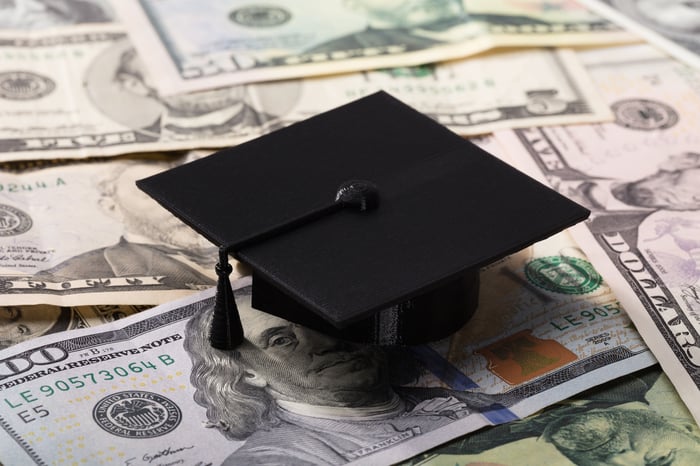 A growth stock with a bright future

Neha Chamaria (Visa): To sock away money into stocks that can earn enough to fund your children's college, even if partly, you need to invest in companies with a strong earnings visibility stretching into several years, even decades, from now. Betting on a trend that's only set to get bigger should do the trick. Case in point: cashless payments.

You see, more and more retailers around the globe are going online. And it isn't just about products. Service providers are also increasingly urging customers to use digital modes to access their services. At the same time, even the smaller brick-and-mortar stores are adopting new-age methods of payments such as cards and mobile wallets. Now, more people are using cashless modes of payments than ever before, which is where a company like Visa stands to gain tremendously.

Visa is the world's largest payments processor, and any transaction made using a Visa co-branded credit or debit card is routed through the company's network for processing. Visa itself doesn't issue any cards -- it simply facilitates payments and earns fees for it. The cards are issued by financial institutions like banks. It's easy to understand why Visa wins in the war against cash: As more merchants seek digital payments and e-commerce grows, customers are inclined to use plastic money. That in turn provides institutions with an incentive to issue more credit and debit cards. Visa is undeniably a preferred brand. To give you an idea of its scale, consider that Visa processed transactions worth $32.5 billion in just the last quarter, an 11% improvement year over year. It generated $5.5 billion in the quarter.

The combination of a massive addressable market and a high-margin business model -- Visa generates operating margins north of 50% -- should ensure solid shareholder returns in the long run.

Maxx Chatsko (Codexis): After rising 450% in the last three years, Codexis is now valued at a market cap of about $1 billion. But it still has a significant growth opportunity ahead of it. That's because the enzyme engineering leader is a relatively small player in the fast-growing global market, but one that appears to be just hitting its stride.

Enzymes are complex molecules created by living cells that help to power life itself, enabling critical functions such as cellular communication and DNA repair. They essentially allow complex chemical reactions to occur at low temperatures and pressures, but that doesn't have to be confined to living things. Codexis engineers enzymes that allow customers to manufacture active pharmaceutical ingredients and food ingredients more efficiently. It sells licenses to its software platform for eight-figure payouts, too. More recently, the company has begun testing enzymes as therapeutic medicines and to power diagnostic tests.

The diversity in the company's approach has begun paying off. Codexis grew total revenue 21% year over year in 2018, and it expects to grow sales another 16% this year. While product revenue has been a little disappointing in recent years, software licenses and biopharma milestone payments have more than picked up the slack. If new diagnostic products currently being tested in the market gain traction, then the business could see growth accelerate and achieve long-awaited profitability in the early 2020s.

Given the array of shots on goal, above-average growth in global enzymes markets, product gross margin of 50%, and the potential of its budding (and largely de-risked) biopharma portfolio, Codexis is a solid candidate for relatively predictable long-term growth.

Chris Neiger (Alphabet): Google's parent company is not only one of the most dominant advertising companies in the world, but its big bets on new technologies will likely fuel growth for years.

For one, the company owns one of the most advanced autonomous vehicle companies on the road right now with its Waymo subsidiary. The company launched one of the only commercial autonomous vehicle ride-sharing services last year, and it has plans to expand it further this year. The company plans on licensing its technology to other companies in addition to generating its own services sales from Waymo, and some have already estimated that the self-driving company is worth $100 billion. With more than 33 million autonomous vehicles expected to be sold annually by 2040, Waymo is developing the technology now that we'll all likely be using when young kids are entering college in the next couple of decades.

But that's not Alphabet's only way to benefit in the coming years, of course. The company is already one the top three public cloud-computing companies right now, behind Amazon and Microsoft, and it has about 10% of the market. The cloud-computing market is expected to grow from $175.8 billion in 2018 to $278 billion by 2021, and even though Alphabet's Google is trailing its rivals, the company's massive cash hoard of about $114 billion means it has plenty of money to invest in its expansion.

If that's not enough to convince you that Alphabet is the stock to pick to help your kid get ready for dorm life, then consider that Alphabet's core business -- its advertising segment -- still dominates the U.S. digital ad market with 37% of the market, with Facebook in the No. 2 spot with 22%.

For investors looking for a good bet to help fund their kids' college tuition, look no further than Alphabet's dominant advertising business and its tech trend bets.