Please ensure Javascript is enabled for purposes of website accessibility
Log In Help Join The Motley Fool
Free Article Join Over 1 Million Premium Members And Get More In-Depth Stock Guidance and Research
By Thomas King, CFA - Updated May 2, 2019 at 3:51PM

Who will it be? Mr. Extravagant or Mr. Thrifty?

As a Fool.com reader of some distinction, you likely already know that buying a used car is a better financial decision than buying a new one. Today, I'll explain how much better it can be. 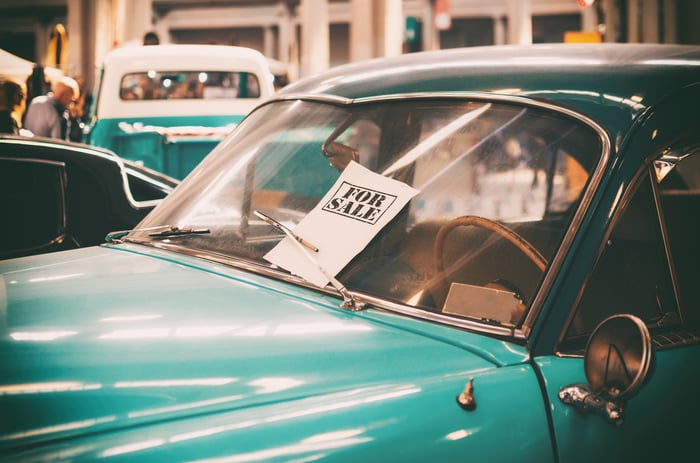 Perhaps you would like to purchase a vintage automobile? Image source: Getty Images

We'll begin our analysis by imagining a man standing at the entrance to a car dealership with $6,000 in his pocket. He will enter the dealership on foot but will drive out in a car. We'll consider two possible scenarios: He decides to be Mr. Thrifty and chooses a used car, or he decides to be Mr. Extravagant and goes with a new one.

Mr. Thrifty buys a used car that he can afford with the cash in his pocket: $6,000. He has the following expenses in his first year of ownership:

For both buyers, all expenses increase at 2.8% annually except the loan repayment, which is fixed.

Mr. Thrifty and Mr. Extravagant's first-year expenses are $1,920 and $3,554, respectively. Mr. Thrifty uses the $1,634 he saves in the first year to invest on a monthly basis, and he continues to save for the next five years of ownership (see graph below). Meanwhile, by the end of year five, Mr. Extravagant has repaid his loan and owns his car free of debt. 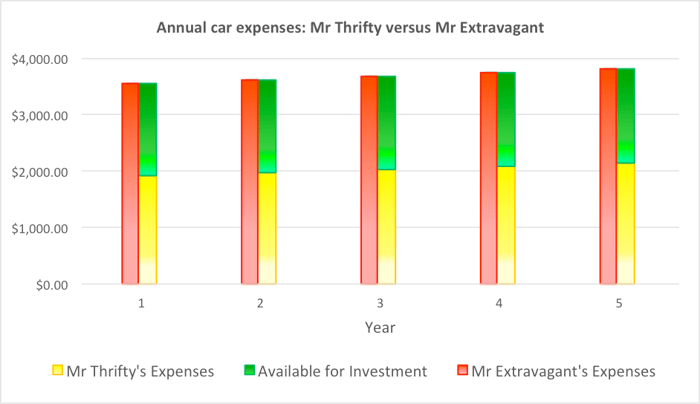 The main thing Mr. Extravagant did wrong was using an interest-bearing loan to buy a depreciating asset; in doing this, he lost money in two ways. The main thing Mr. Thrifty did right was saving the money he didn't spend on a new car. This is important: If Mr. Thrifty had not saved and invested that money, he'd have ended up less wealthy than Mr. Extravagant at the end of five years ($3,543 versus $7,086), and he'd have spent all that time getting less respect from his peeps. On the other hand, if Mr. Thrifty's friends are the type of people who judge others based on their car, perhaps he could do with better friends!