Please ensure Javascript is enabled for purposes of website accessibility
Log In Help Join The Motley Fool
Free Article Join Over 1 Million Premium Members And Get More In-Depth Stock Guidance and Research
By Adam Levy - Updated May 3, 2019 at 3:00PM

Facebook (FB 1.18%) has been rapidly pushing out new features on Instagram to let more commerce take place on the photo-sharing app. In 2016, the company introduced shoppable product tags, and it has since made it increasingly easy for users to find and buy products through the platform. One of its latest efforts is Instagram Checkout, which enables users to buy items they see on the app without ever leaving it.

At Facebook's F8 developer conference this week, Instagram announced it is extending product tags to a select group of influencers on Instagram. The feature will initially integrate with the couple dozen retailers that are part of the Checkout beta. Product tags were previously only available to approved businesses. This move could signal the coming expansion of the feature to all users, which would mean regular users could share their fashion sense and product preferences with everyone.

While Facebook won't give influencers a cut of the share of each sale, it is providing influencers with data they didn't previously have access to, including how well shoppable posts perform. That could open up new ad product possibilities for Facebook, and simpler monetization paths for influencers or would-be influencers. 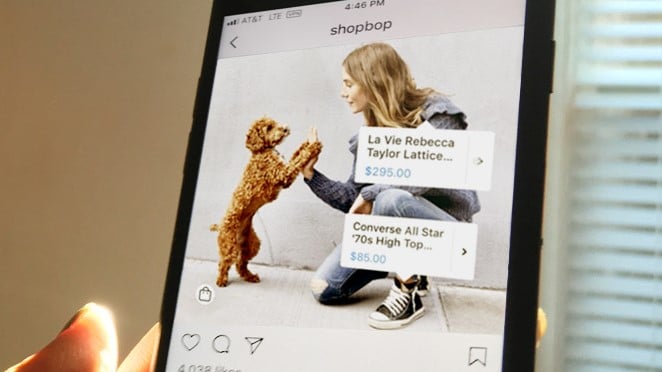 Not only is Instagram giving influencers the ability to tag products in their posts, it's making it easier for users to discover those shoppable posts. The Explore tab, where users spend about 20% of their time in the Instagram app, now features a dedicated shoppable posts section. And with influencers starting to get access to shoppable product tags, the number of posts in that section should only continue to climb.

Instagram will likely expand shoppable product tags to more users over time. It might require users to have a certain number of followers in order to gain access to the feature, in order to limit the number of shoppable posts in users' feeds. Still, shopping on Instagram could see a big bump from expanding the current pilot, much to the company's benefit.

Instagram is also reportedly considering a stand-alone shopping app. And if it manages its users properly, it could use the main Instagram app as a launchboard for such an app. Facebook Messenger catapulted to hundreds of millions of users overnight when the company forced users to use the app instead of messaging through the Facebook app. Depending on how the new function fares, an Instagram shopping app could see a similar result.

But Mark Zuckerberg says the company will either give away most of its shopping products or offer them at cost as much as possible. Instead, he wants to build ad products around Instagram's shopping features.

The extension of shoppable product tags to influencers opens the door for Facebook to work as a middle man, so to speak, between brands and influencers. It's already giving influencers data on how their posts convert into sales when using product tags, so influencers can show the results they produce the next time a brand is looking for promotion.

But Facebook could bring clients to influencers, or vice versa, and make it easy to connect. That would encourage influencers to build their personal brands on Instagram and create shoppable posts, as Facebook would provide an easy way for influencers to monetize their presence. The social network, meanwhile, would be generating revenue by taking a cut of the growing influencer economy.

There are a lot of ways Instagram and Facebook can monetize their expanding set of shopping features. Putting the power in the hands of influencers to send users directly to product pages within the app will practically turn Instagram into a showroom for a lot of users. Shopping will likely expand as the company rolls out new features, and investors need to be mindful of Facebook's plans to monetize the behavior.