Please ensure Javascript is enabled for purposes of website accessibility
Log In Help Join The Motley Fool
Free Article Join Over 1 Million Premium Members And Get More In-Depth Stock Guidance and Research
By Jason Hall – May 2, 2019 at 7:31PM

Let's take a closer look at Under Armour's progress in the quarter and what to expect going forward. 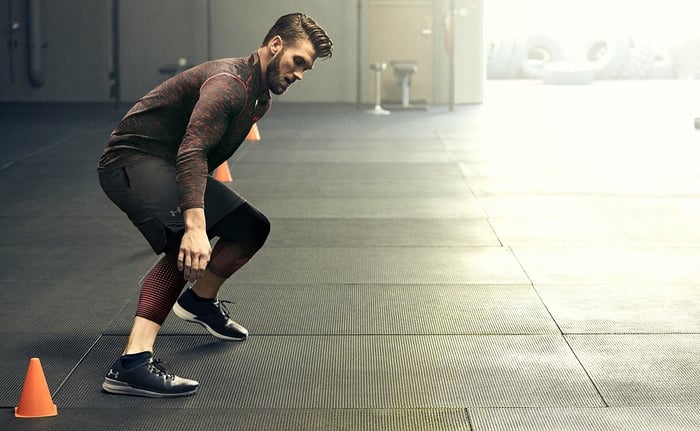 Here's a closer look at some key metrics for Under Armour in the quarter:

The good news from the first quarter is that, while sales growth remains relatively weak, the company's efforts to get expenses under control and improve profitability are paying off. This is a continuation of the trend we saw in the fourth quarter of 2018.

Moreover, those efforts are delivering steadily improving results on the bottom line, as the $22.5 million in net income -- $0.05 per share -- shows. This is not just a big improvement from last year's loss, but it's also a solid step forward from the $1 million in net income in the previous quarter.

A few things in particular drove Under Armour's improvement: Gross profit increased $21 million, while selling, general, and administrative expenses declined $5 million. The combined $26 million improvement helped to offset the $8 million in tax expense after having a positive tax benefit in both the first quarter of last year and the fourth quarter of 2018.

Moreover, the company didn't take any restructuring charges in the quarter; it took nearly $38 million in the prior-year quarter, and over $183 million in all of 2018.

Drilling down to Under Armour's geographical segment results, the story continues to be weak sales in North America, with Asia-Pacific delivering double-digit sales growth and the rest of the world still growing, but slowing.

The athletic apparel and footwear categories in North America remain highly competitive, but it's worth noting that while Under Armour's sales in its biggest market continue to lag, its biggest competitor, industry heavyweight Nike, isn't having the same problem.

Nike recently reported 7% sales growth of its core Nike-branded products in North America, and global sales growth of 7% to $8.98 billion. It also reported big improvements in earnings to $1.1 billion, and projected "high-single-digit" growth in its current quarter (adjusted for currency exchange).

North America and EMEA -- Europe, Middle East, and Africa -- are doing the heavy lifting on Under Armour's bottom line:

As the table above shows, despite declining sales in North America and tepid growth in EMEA, operating margins and operating income improved notably in both of those segments, while Asia-Pacific, despite being the fastest-growing region, became less-profitable in the quarter.

While Under Armour continues to deal with weak sales in North America, management is optimistic that the worst is behind it. Full-year sales guidance remained unchanged, with expectations for 3% to 4% revenue growth, driven by flat full-year North American sales and sales growth in the low double digits in the rest of the world.

Having the weight of its restructuring expense in the rearview mirror is already paying dividends, not just by lowering costs but also delivering higher margins as management promised. That has returned the company to profitability. However, the lingering question it still hasn't answered is this: When will sales growth return to North America? Investors want to know the answer as soon as possible.