Please ensure Javascript is enabled for purposes of website accessibility
Log In Help Join The Motley Fool
Free Article Join Over 1 Million Premium Members And Get More In-Depth Stock Guidance and Research
By Jim Crumly – May 2, 2019 at 5:06PM

Investors gobbled up shares of Beyond Meat and Qualcomm revealed details of its settlement with Apple.

A 3% decline in crude oil weighed on the stock market Thursday, with the Dow Jones Industrial Average (^DJI -1.62%) and the S&P 500 (^GSPC -1.72%) falling in the morning but regaining some ground in the afternoon.

As for individual stocks, Beyond Meat (BYND 2.88%) soared after going public, and Qualcomm (QCOM -2.01%) beat earnings expectations and will get a big payoff from its settlement with Apple (AAPL -1.51%). 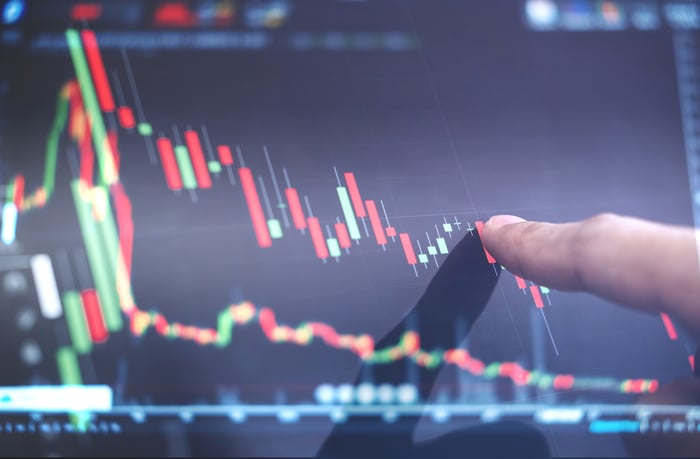 Investors' mouths were watering at the chance to take a bite of Beyond Meat, maker of plant-based meat substitutes, and shares skyrocketed 163% to $65.75 after it went public today. The company had set an offering price of $19 to $21 last week, upped the range to $23 to $25 Monday, and settled on $25 this morning. Shares opened trading at $46 and headed skyward from there.

The company makes the Beyond Burger, which is assembled from plant-derived amino acids, lipids, and trace minerals and designed to look, cook, and taste like traditional ground beef. Beyond Meat is selling the product in 15,000 grocery stores, as well as supplying A&W Canada, Carl's Jr., and TGI Fridays. The company had revenue of $87.9 million in 2018 and a net loss of $29.9 million.

Beyond Meat sold 9.625 million shares to the public, raising $241 million for the company, which is now valued at $3.7 billion after today's trading. Beyond Meat is growing rapidly, nearly tripling sales from 2017 to 2018, which may explain why investors were willing to pay a dizzying 42 times 2018 revenue for the stock in a red-hot market for IPOs.

Qualcomm is getting $4.5 billion from Apple

Qualcomm reported fiscal second-quarter results that beat expectations and revealed details of its settlement with Apple, and shares edged up 0.9%. Revenue fell 4.6% to $4.98 billion, above the midpoint of its guidance and the $4.8 billion analyst consensus estimate. Non-GAAP earnings per share of $0.77 was $0.01 below the result in the period a year earlier, but exceeded the top end of the guidance range and the $0.71 Wall Street was expecting.

Qualcomm is seeing weakness in the market for devices that use its modem chips, especially in China. The company lowered its forecast for global sales of 3G/4G/5G devices in 2019 by 2.6%, reflecting a lengthening of the handset replacement cycle, possibly caused by consumers waiting for the rollout of 5G.

But more than offsetting industry headwinds will be the financial benefits of settling its dispute with Apple. Qualcomm expects between $4.5 billion and $4.7 billion in additional revenue in Q3 from the deal, essentially doubling its top line. Longer term, licensing revenue from sales of chips to Apple should add about $2 in EPS annually out to 2021.