Please ensure Javascript is enabled for purposes of website accessibility
Log In Help Join The Motley Fool
Free Article Join Nearly 1 Million Premium Members And Get More In-Depth Stock Guidance and Research
By Will Healy – Sep 28, 2020 at 8:29AM

These are the types of companies the Oracle of Omaha likes to target.

Warren Buffett has built a decades-long track record of wise stock picks. From American Express to Coca-Cola and, more recently, Apple, buying the right stocks at the right time has made Berkshire Hathaway one of the largest publicly traded companies.

Buffett typically looks for reasonably priced stocks that he can keep long term. They will often include a dividend, preferably a payout that rises periodically.

However, some companies you might think of as "Warren Buffett stocks" are not part of the Berkshire portfolio. Given their valuations and business models, stocks like BJ's Wholesale (BJ 0.09%), Cardinal Health (CAH 1.93%), and Qualcomm (QCOM 7.53%) could potentially appeal to Buffett and deliver the returns he seeks.

BJ's has undergone what CFO Bob Eddy calls "transformational" changes thanks to the increased business from COVID-19. This allowed the company to bring in more free cash flow in one quarter than it typically earns in a year. Moreover, the company's debt has fallen, and the retail stock is already up 78% this year.

Purchasing BJ's could compare to Buffett's investment in Costco back in 2000. At the time, Costco ran 349 warehouses and had only a modest presence outside of North America.  Its footprint has more than doubled in size since that time.

Now, the same could happen with BJ's. Since it has more capital, BJ's is free to add locations in its core East Coast area. Investors should also remember that companies such as Costco have built investor fortunes moving from regional to international businesses. Though nobody expects to see BJ's in California or China anytime soon, it has recently expanded to Ohio and Michigan.

Few investors seem to have noticed. BJ's stock has more than doubled from the March lows. Despite this surge, it trades at less than 16 times forward earnings. This is significantly lower than Costco and other peers.

Also, this comes at a time when analysts forecast earnings growth of 81% for this year. They also believe earnings will fall 11% in the next fiscal year as the pandemic recedes. Nonetheless, with the cash flow available to fund additional warehouses, investors should not expect the market cap to stay below $6 billion for long. 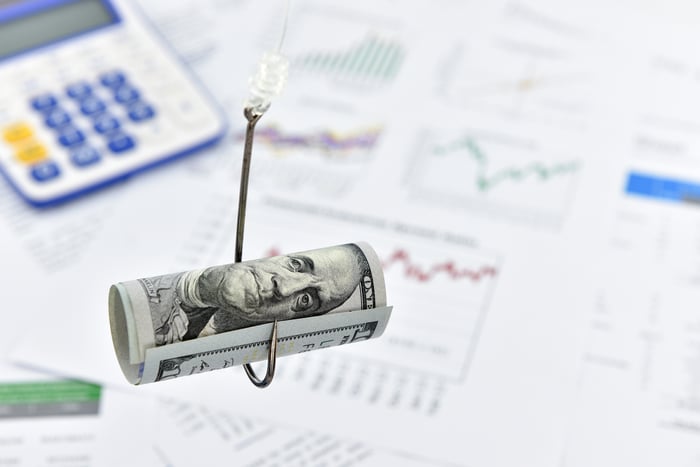 Buffett is no stranger to healthcare investing. One of his more notable investments was DaVita, which he first purchased in 2011. DaVita remains a Berkshire holding and has produced significant returns.

Given the current situation of Cardinal Health, Buffett could potentially repeat that feat. Cardinal depends heavily on elective surgeries for its income. With the lockdown putting those procedures on hold, Cardinal's revenue suffered. For now, it is one stock that hasn't recovered to its February high.

As a result, Cardinal now trades at a forward P/E ratio of less than nine. Also, despite the loss in business, analysts still anticipate an earnings increase, albeit one at less than 1%. Still, Cardinal expects profit growth to improve to more than 8% next year as the economy recovers from the pandemic.

Moreover, Cardinal also offers one thing DaVita does not -- dividends. Its annual dividend of about $1.94 per share not only yields over 4.3%, but has also increased annually for more than 30 years.

Furthermore, the company produced just under $1.6 billion in free cash flow in fiscal 2020. Since the dividend expense for that period came to just $569 million, Cardinal can easily fund future payout hikes. Once Cardinal moves past the pandemic, it could again see the kind of growth that attracts investors such as Buffett.

Given its potential, he might want a similar stake in Qualcomm. Qualcomm is the only major producer of a chipset needed to provide 5G service. Though this has led to charges that it's a monopoly, Qualcomm managed to get the ruling overturned. It has also repelled challenges from Apple and Intel in both the courts and the marketplace.

A 5G upgrade cycle will likely begin with the next iPhone release, and Grand View Research forecasts a compound annual growth rate of 63.4% for 5G chipsets. Unless and until a competitor emerges, that benefit will primarily accrue to Qualcomm.

Although Qualcomm stock has moved higher in recent months, it sells for less than 19 times forward earnings. Moreover, analysts forecast more than 63% earnings growth next year, a prediction in line with Grand View's forecast.

Additionally, Qualcomm has also become a dividend growth stock. It introduced payouts in 2003, and dividends have risen in most years since that time. The current annual payout of $2.60 per share yields about 2.3%.