Please ensure Javascript is enabled for purposes of website accessibility
Log In Help Join The Motley Fool
Free Article Join Over 1 Million Premium Members And Get More In-Depth Stock Guidance and Research
By Joe Tenebruso - May 3, 2019 at 4:46PM

Franchisees opened 34 net new Dunkin' restaurants in the U.S. in the first quarter and a total of 256 locations in the past year, bringing the company's total U.S. store count to 9,453 restaurants. Meanwhile, Dunkin's U.S. same-store sales rose 2.4%, driven by price increases and strong sales of premium-priced espresso and frozen beverages. 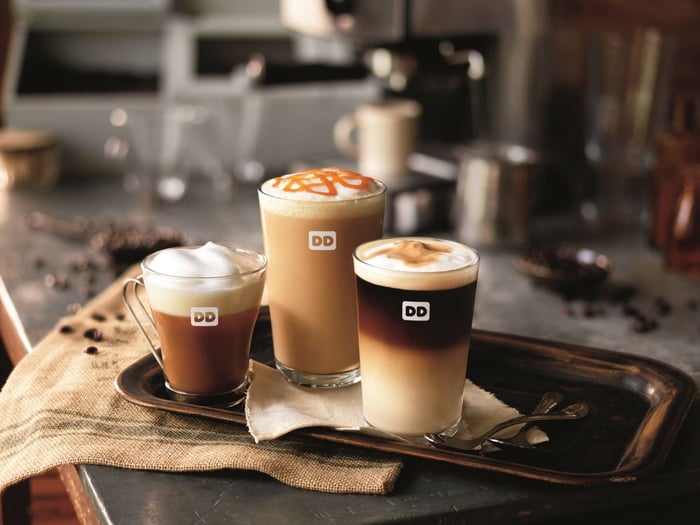 However, the comp gains from higher prices were partially offset by lower traffic. To meet this challenge, Dunkin' is attempting to drive traffic to its stores during times other than just its core breakfast daypart, with new menu items and value-meal promotions.

Still, CEO Dave Hoffmann acknowledged that traffic trends are likely to remain an ongoing challenge during a conference call with analysts. According to Hoffman:

Despite these challenges, Dunkin' Brands Group's companywide revenue increased by 5.9%, to $319.1 million. Operating income -- adjusted to exclude certain amortization and impairment charges -- climbed 11.1%, to $106.3 million, while adjusted earnings per share rose 8.1%, to $0.67.

"With this team and our world-class franchisees and great suppliers, we believe we have what it takes to succeed," Hoffmann said. "We're proud with how we started this year, but we're not losing sight of creating sustainable value for our customers, franchisees, and shareholders in the years ahead."