Most business assets aren't designed to last forever, and accounting for those assets is an important aspect of managing a company's finances. Amortization is an accounting term that deals with the cost allocation of an intangible asset. With amortization, a business will write off the cost of an intangible asset over the course of its useful life -- a process that reduces its assets and stockholders' equity on its balance sheet. In the context of mortgage and auto loans, amortization also refers to the repayment of principal over a certain period of time. 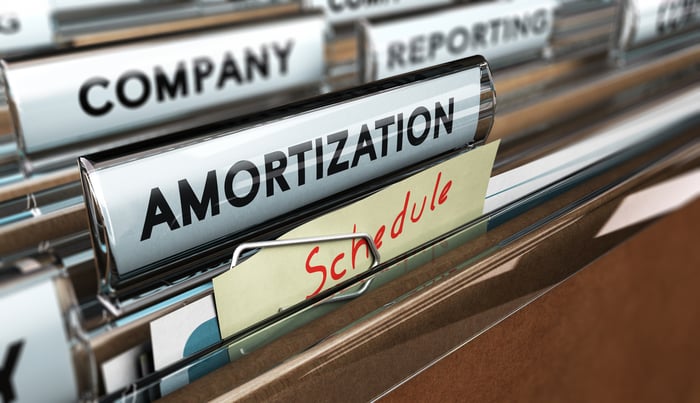 When a company amortizes an asset, it is spreading out the cost of that asset over the course of its useful life. Amortization roughly matches the expense of an asset with the revenue it brings in. As a business writes off an asset, that asset is shifted from the balance sheet to the income statement. Amortization is used to write off intangible assets that have a specific useful life. Patents, copyrights, and licenses are good examples of intangible assets that can be amortized. Because all of these items come with expiration dates, it's possible to calculate how much of each asset has been used up at any given point in time.

Amortization helps businesses understand how they're using their assets. Just as importantly, decreasing an asset's value over time is a good way to help reduce a company's taxable income, which is something all businesses are eager to do.