Please ensure Javascript is enabled for purposes of website accessibility
Log In Help Join The Motley Fool
Free Article
Join Nearly 1 Million Premium Members And Get More In-Depth Stock Guidance and Research
By Billy Duberstein – May 4, 2019 at 9:15AM

This consumer staple took a 7% price hit after a rough winter. Here's why and what it might mean for investors.

Shares of Clorox (CLX 1.17%) were off about 7% after its earnings report earlier this week. The company missed analyst estimates on both revenue (+2%) and EPS (+5%). Adding to the damage was a slight lowering of the company's full-year guidance, reflecting the quarter's challenges. (Clorox's fiscal year ends in the June quarter.)

Clorox had been one of the higher-multiple consumer staples companies of late, so the recent guidance adjustment may merely be the company pulling back from too much optimism. Clorox has shown itself to be a top performer over the long haul. Its 29% return on invested capital is among the best in its category, and the company has been a top-decile performer over the past one, three, five, and 20 years versus other consumer staples stocks.

Management gave a few concrete reasons why the quarter disappointed and suggested that they should largely be transitory. Let's take a closer look at their explanations.

A mild cold and flu season

Good news for Americans was bad news for Clorox. This past winter was one of the mildest on record for colds and flu, while the prior year was particularly severe. That, in turn, caused a large year-over-year mid-single-digits decline in the Clorox Wipes category. The previous year that category grew by double digits.

In addition, since Clorox is the leader in that category with about 50% market share, its competitors responded to the disappointing season with aggressive price promotions, causing Clorox to feel the impact even more.

We are the innovation leader. We are the spending leader. We have the superior equity. Our brand is seen as better in value. So what that means is as competitors are under pressure, they sometimes react with increased promotional spending, and that's what we're seeing now. We're applying the recipe that we've always applied, which is to defend short term to make sure that the competitors understand that this is not the way to grow this category, but then also to continue to drive our strengths long term and to strengthen certainly our innovation and our brand equity building, advertising, and sales promotion.

Clorox has been taking advantage of its leadership position in many niche categories to raise prices and offset rising freight and logistics costs. While that appears to have worked for most categories -- six of nine products increasing share while the company raised prices -- it didn't work as well in wipes because of softening demand.

Clorox also felt pressure in its Glad trash bag segment. Like wipes, Clorox is the category leader here. Last year, Clorox hiked prices for Glad trash bags to counteract a rise in resin costs. Not only did competitors not follow suit, but resin costs actually dropped, contrary to management expectations. In addition, the competition pressed hard on promotions in an effort to steal market share.

To account for this double whammy, Clorox will bite the bullet and increase its "trade spending" (promotions in retail partners' stores) this quarter. That's a fancy way of saying it is lowering prices. These changes have just happened, so the effect won't be known until the next earnings report.

Clorox felt some profit pressure in its lifestyle segment, including pressure on Nutranext, which the company purchased around this time last year. While that segment's sales were actually up a strong 23%, the segment's operating earnings fell 7%.

The revenue growth mostly came from Nutranext. But Clorox is still investing in Nutranext to better integrate its products into Clorox's distribution chain. In addition, this segment absorbed some of the largest freight costs in the portfolio as products like Brita water filters were affected by new tariffs. Within the category is also Burt's Bees lip care, which Clorox promoted heavily on the heels of its continued strength.

Basically, the lifestyle segment's impressive growth was entirely eaten away by investments in further growth, with some extra tariff pressure thrown in. Those investments could lead to outperformance down the road, but investors aren't seeing that yet.

It seems Clorox's problems are mostly transitory. I expect the company's wipes and trash segments to get back on track this year. This could, in theory, make Clorox a good buying opportunity, especially if Nutranext turns out to be a winner.

Then there is the fact that, even after the post-earnings drop, Clorox still trades at a not-so-cheap 23 times forward earnings. However, while it's somewhat pricey, its P/E ratio falls roughly in the middle of the nonfood-centered large-cap consumer staple stocks. 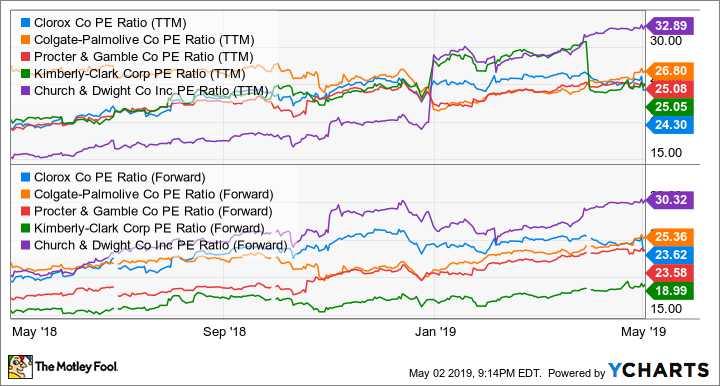 So, if you're a retiree looking for stability, a bit of yield, and a little growth, you could do far worse than Clorox after an earnings dip.

Clorox stock, like its peers, really almost seems like a bond equivalent at this point. None of these consumer staples are particularly cheap, and returns likely won't be as great as other sectors until the next recession comes along.

Is Clorox an Excellent Defensive Dividend Stock to Buy?

2 Dividend Stocks to Double Up On Right Now
395%