Please ensure Javascript is enabled for purposes of website accessibility
Log In Help Join The Motley Fool
Free Article Join Over 1 Million Premium Members And Get More In-Depth Stock Guidance and Research
By John Rosevear – May 7, 2019 at 3:06PM

Italian luxury sports-car maker Ferrari (RACE -1.52%) said that its first-quarter operating income rose 11%, to 232 million euros, on strong demand for its V8-powered Portofino convertible and -- bucking the market's trend -- a jump in China deliveries ahead of new emissions regulations.

Data source: Ferrari N.V. "Adjusted" figures exclude special items. Ferrari had no special items in the first quarter of 2019; the adjusted figures are used here to facilitate comparisons. P.p. = percentage points. As of May 7, 2019, 1 euro = about $1.12. 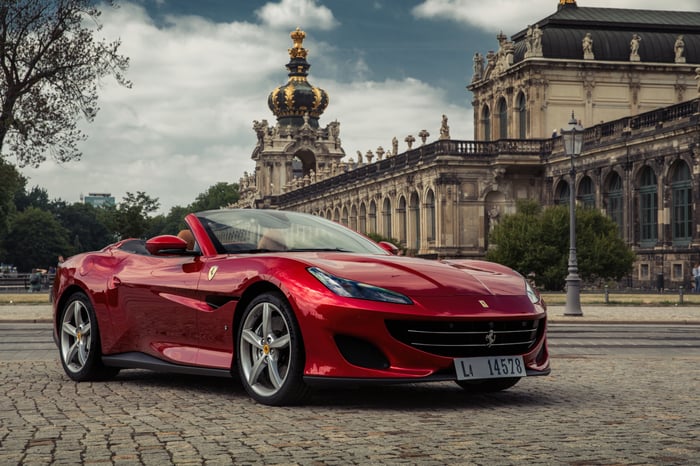 Ferrari's Portofino is a V8-powered convertible designed to attract new buyers to the brand. Sales have been very strong since its introduction last year. Image source: Ferrari N.V.

Ferrari's quarter in a nutshell

Ferrari has several different models and they're all very profitable by auto-industry standards. But some are more profitable than others, and the "mix" of models sold in a given quarter is the principal driver of Ferrari's EBIT margin.

For investors, Ferrari's cars are best thought of in three groups, listed here in increasing order of profitability:

In the first quarter of 2019, Ferrari's shipments rose 23% from the year-ago period, but its adjusted EBIT margin fell slightly. What happened?

The big story is that demand for the Portofino, a V8-powered convertible introduced last year, has been exceptionally high. Ferrari said that strong demand for the Portofino drove a 30.8% increase in sales of 8-cylinder models. Meanwhile, sales of 12-cylinder cars, led by the still-newish-but-somewhat-older 812 Superfast, rose 4.1% in the quarter, and Ferrari hadn't yet begun deliveries of its latest limited-edition models, the Monza SP1 and SP2.

Long story short: The mix of Ferraris sold in the quarter included a larger proportion of 8-cylinder models than a year ago (and fewer limited-edition models). Ferrari shipped more cars, but its profitability slipped slightly.

From an investing perspective, this isn't a problem: Ferrari's margin will fluctuate as demand shifts among its models. The fact that Ferrari's newest model is in high demand is good news.

About that big jump in China sales

Deliveries in China, Taiwan, and Hong Kong jumped a combined 79%, to 328, as Ferrari pushed to fill open orders in China ahead of new emissions regulations. Investors should note that this may have the effect of "pulling ahead" demand, meaning that deliveries may slump a bit in the next couple of quarters.

But it's also worth noting that demand increased in all of Ferrari's other regions as well:

Ferrari confirmed that it's on track to meet the full-year guidance it gave in January.