Please ensure Javascript is enabled for purposes of website accessibility
Log In Help Join The Motley Fool
Free Article Join Over 1 Million Premium Members And Get More In-Depth Stock Guidance and Research
By Steve Symington – Updated May 8, 2019 at 7:39AM

The Oracle of Omaha knows insurance. But we shouldn't count out the electric-vehicle leader just yet.

When Tesla (TSLA 1.72%) released disappointing first-quarter results just over a week ago, most headlines unsurprisingly revolved around the electric automaker's steep sequential drop in deliveries and, consequentially, its far wider than expected quarterly net loss. Still, Tesla CEO Elon Musk offered a light at the end of the tunnel, suggesting deliveries would rebound in short order and reaffirming their full-year target for delivering 360,000 to 400,000 vehicles in 2019.

But something else Musk confirmed during the subsequent conference call sent shock waves through another industry: Tesla is not only creating its own insurance product, but it also hopes to launch that product by the end of this month. 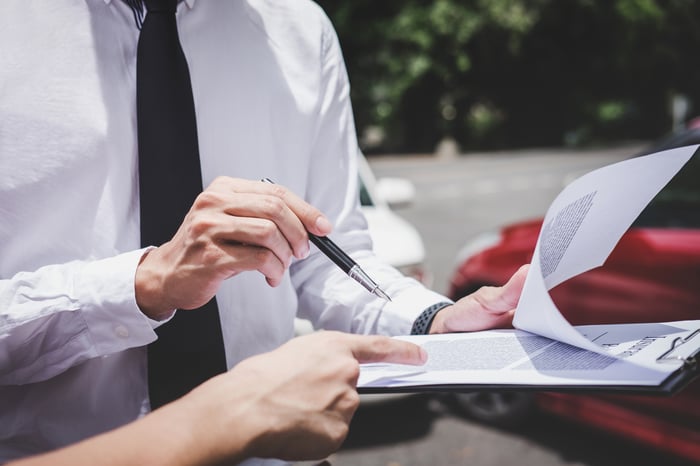 Musk added that Tesla's insurance "will be much more compelling than anything else out there." In particular, Musk says Tesla wants to capitalize on a "substantial price [and] information arbitrage opportunity" by leveraging unique customer data collected from its vehicles.

Warren Buffett isn't so sure

Considering nearly a third of Berkshire's entire business comes from its insurance segment, which notably counts Geico and General Reinsurance among its subsidiaries, Buffett is obviously in a unique position to speak as an authority on the matter.

General Motors had a company for a long time called Motors Insurance Company. And various companies have tried it. [...] I worry much more about Progressive. And I would bet against any company in the auto business [getting into insurance] being any kind of an unusual success. The idea of using telematics in terms of studying people -- it is important to have data on how people drive, how hard they brake, how much they swerve, all kinds of things. So I don't doubt the value of the data. But I don't think the auto companies will have any advantage to that. I don't think they'll make money in the insurance business.

Of course, Buffett was speaking off the cuff about a potentially disruptive, competitive solution to providing auto insurance, and with presumably little knowledge of Tesla's specific plans.

But before we accept Buffet's prediction as gospel -- and with all due respect to arguably the greatest investor and CEO of all time -- remember that Buffett is also the first to admit he's not always right.

Why the Oracle of Omaha could be wrong

First, at least in the near term, Tesla's primary goal may not be to "make money in the insurance business."

Rather, the greater short-term benefit of a Tesla insurance plan could be realized by streamlining the Tesla ownership experience, and providing additional cost savings to Tesla drivers on top of their now-nonexistent gas bills. Further reducing the barrier to entry into Tesla's world in this way could create a significant network effect that helps meaningfully increase vehicle orders.

Second, some skeptics have already speculated that -- given the lack of specifics provided by Musk during the call -- this could be a repeat of the previous "funding secured" Tweet debacle that left Elon Musk in hot water with the SEC last year.

But we already know Tesla isn't going it alone. In fact, Tesla has enlisted the help of specialty insurance company -- and ironically one of the market's most popular so-called "mini-Berkshire" stocks -- Markel (MKL 1.90%). In response to an investor question during its quarterly conference call last week, co-CEO Richard Whitt confirmed Markel's State National subsidiary will provide the fronting for Tesla's insurance.

Often the people that have these innovative ideas have a hard time navigating the regulatory environment and being able to execute quite honestly on their innovative ideas. That's where State National can come to the table and help them. In the case of the partnership with Tesla, State National is providing just that. They're supporting innovative solutions that Tesla has [created] with risk-taking partners.

In keeping with that fronted model, Whitt noted that State National will not retain any of the resulting insurance business. Rather, he says that business will be ceded to the unnamed risk-taking partners Tesla has actually secured this time.

"And I don't want to say any more than that," Whitt concluded, "because obviously Tesla and the risk-taking partner have many things they probably want to say about the arrangement."

For now, that means investors will need to hurry up and wait for more color on Tesla's impending insurance product launch. Without that color, it's admittedly difficult to tell whether the product will be a success. But until then, I think it would be a mistake to assume this notoriously disruptive company can't succeed in the insurance world.

Steve Symington has no position in any of the stocks mentioned. The Motley Fool owns shares of and recommends Berkshire Hathaway (B shares) and Tesla. The Motley Fool has a disclosure policy.