Celldex Therapeutics (NASDAQ:CLDX) has faced a different set of challenges after the biotech's lead candidate, glembatumumab vedotin (glemba), failed in a pivotal clinical study last year for treating triple-negative breast cancer. Instead of preparing for a potential commercial launch, Celldex has had to cut costs and focus on earlier-stage candidates.

The company provided its 2019 first-quarter update after the market closed on Tuesday. Here's what you need to know about Celldex's latest results. 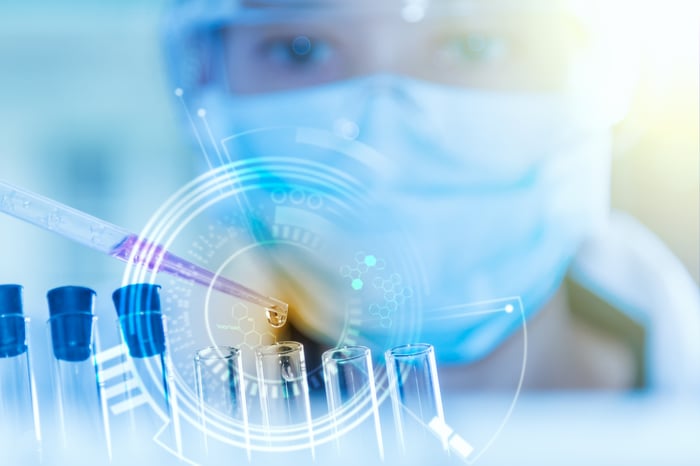 Celldex's revenue stems primarily from contracts and grants, since the company has no approved products yet. There was significantly less revenue in the first quarter as a result of less money coming in from the company's contract manufacturing and research agreement with the International Aids Vaccine Initiative and its collaboration agreement with Bristol-Myers Squibb.

The company's bottom line improved from the prior-year period, but primarily because of the disappointment over glemba last year. Following the failure of the drug in the Metric clinical study, Celldex slashed its spending and reduced staff.

Celldex's pipeline progress is more important than its financial results right now. The company is especially hopeful about two candidates: CDX-1140 and CDX-3379.

The biotech should soon wrap up patient enrollment for the monotherapy arm in its phase 2 clinical study evaluating CDX-1140 and is on track with the CDX-301 combination arm of the study targeting treatment of solid tumors and B cell lymphomas. Celldex has already completed enrollment in the first stage of its phase 2 study evaluating CDX-3379 in combination with Erbitux in treating head and neck squamous cell cancer.

Celldex presented positive data across multiple programs at AACR in April, including from our promising CDX-1140 program. We have successfully cleared a critical hurdle for CD40 agonists, reaching dose levels with good systemic exposure that are biologically active and well tolerated. Importantly, these dose levels exceed the maximum tolerated dose levels reported with other CD40 agonists, which we believe may support enhanced tissue and tumor penetration. We are also pleased with the results to date in our unique combination of CDX-1140 with CDX-301, where CDX-301 amplifies the numbers of dendritic cells in patients prior to their activation with CDX-1140. To this end, we continue to believe that CDX-1140 can play a very important role in cancer immunotherapy, especially in combination with drugs that target other key immune pathways and are actively planning additional combination cohorts to begin later this year.

One key thing for investors to watch in the coming months is what happens next with CDX-3379. Celldex has already documented a confirmed complete response for the drug in its phase 2 study. The company is conducting a comprehensive review to determine next steps for development. Celldex also plans to present updated data from this study at the American Society of Clinical Oncology (ASCO) meeting in June.

Another important thing to watch is Celldex's cash position. The company reported cash, cash equivalents, and marketable securities of $85.1 million as of March 31, 2019. This reflected a decrease from the $94 million reported at the end of 2018. Celldex used $13.2 million to fund operations and raised $4.2 million through stock sales under its existing Cantor agreement. The company still thinks that its cash stockpile, combined with future sales of stock under the Cantor agreement, will carry it through 2020.