Please ensure Javascript is enabled for purposes of website accessibility
Log In Help Join The Motley Fool
Free Article Join Over 1 Million Premium Members And Get More In-Depth Stock Guidance and Research
By Timothy Green – Updated May 8, 2019 at 5:01PM

The company's explanation has some holes.

None of those numbers were all that surprising. What was surprising was what Lyft didn't report. Nowhere in the company's earnings release was there any mention of bookings, which is the total dollar value of what its customers pay to use its services. Also missing in action was Lyft's take rate, which is the percentage of bookings the company converts into revenue. Both numbers were featured prominently in the company's pre-IPO S-1 filing. 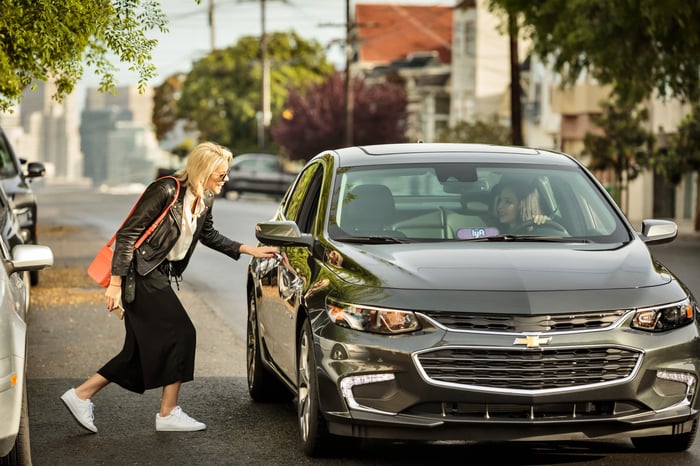 Lyft co-founder and CEO Logan Green was asked about these missing metrics during the earnings call (transcript via Seeking Alpha). He explained that the company is "now aggressively investing in new areas including those where revenue equals bookings." In the ridesharing business, the revenue that Lyft recognizes is what's left after drivers are paid. In its scooter and bike rental businesses, revenue is equal to bookings.

"So, we really want to try to avoid investor confusion," Green continued.

But bookings and revenue as a percentage of bookings are important metrics for the ridesharing business. Lyft even said so in its S-1, stating that revenue as a percentage of bookings was a key measure of the company's ability to increase driver utilization, increase the efficiency and effectiveness of driver incentives, and reduce marketwide price adjustment promotions, among other things.

Without the bookings-related metrics, investors will now have a much harder time assessing Lyft's performance. The solution to this problem of "investor confusion" is not to drop the metrics entirely, like Lyft is doing. The solution is to report ridesharing metrics separately from everything else.

But that would undermine what I think is the real reason Lyft is scaling back its disclosures.

When a company suddenly stops disclosing key metrics, it's safe to assume that the underlying reason is because it doesn't want investors to see those metrics anymore. The company will come up with a plausible-sounding explanation, but that's usually nothing more than an excuse.

Lyft's decision to drop bookings as a metric is awfully similar to Apple's decision to stop reporting iPhone unit sales. Apple made that change late last year, a few months before it slashed its guidance due to -- you guessed it -- weak iPhone sales.

Apple isn't the only company that plays this game. Micron Technology, a major memory chip manufacturer, stopped disclosing how its costs per bit changed in late 2017. Micron followed that up by dropping its gross margin disclosures for its product categories about nine months later. Lo and behold, Micron's revenue and profit began plunging soon after as the memory chip markets entered a severe downturn.

Maybe Lyft really does just want to prevent investors from being "confused." But I very much doubt it. My best guess as to why Lyft is dropping bookings as a metric: Its outlook for the ridesharing business isn't all that rosy, and it wants to keep investors in the dark for as long as it can.