Please ensure Javascript is enabled for purposes of website accessibility
Log In Help Join The Motley Fool
Free Article Join Over 1 Million Premium Members And Get More In-Depth Stock Guidance and Research
By Daniel B. Kline – May 9, 2019 at 6:25AM

The restaurant chain has taken some shots at the clear coffee market leader.

Starbucks (SBUX -0.63%) created the demand for espresso-based beverages in the United States, and it remains the category leader despite countless challengers. McDonald's (MCD -0.80%) has already tried to win business from the coffee chain, and Dunkin' (DNKN) brands recently redid its espresso platform to try to grow that part of its business.

The chain's CEO Dave Hoffman was excited about Dunkin's growth in espresso during his company's first-quarter earnings call. He laid out how his company has been doing in the espresso-based drink market:

"We are seeing our market leadership in hot and iced drip coffee translate into the incredible success of our espresso relaunch," he said. "We've grown the category by 30% and it brought new guests into our restaurants." 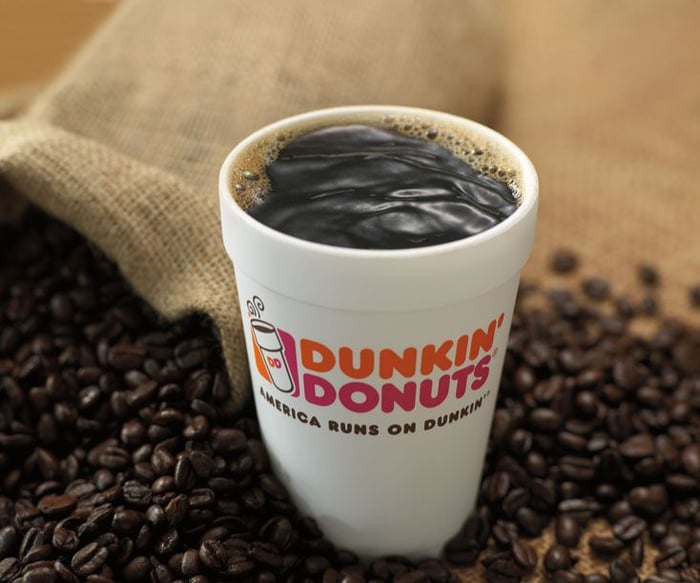 Dunkin' has dropped "Donuts" from its name and has updated its espresso offering. Image source: Dunkin'.

A shot at Starbucks?

Hoffman did not pull his punches when commenting. He outright took a shot at Starbucks' service (though he did not mention the company by name).

"Most importantly, we've also maintained our operational speed, critical to customers who come to us every day expecting great coffee fast," he said. "High-quality espresso beverages sold at a fair price and served at the speed of Dunkin' is something only we can do. It's why we believe we are the brand that could democratize espresso, and why we're committed to the category for the long term."

Essentially, the CEO called Starbucks slow and expensive. Comparatively, that's true -- Dunkin' has a more automated drink system than its rival, and it offers lower prices in general for similar drinks. That's a case the company made when it first introduced the new espresso, according to a Wall Street Journal article (subscription required).

How are consumers reacting?

McDonald's has been in the cheap espresso space for years, and it's hard to say whether their presence has impacted Starbucks' sales. In fact, you could argue that the fast-food chain has only managed to increase awareness of espresso-based beverages and grow demand for the drink category. By adding its McCafe menu and heavily discounting it, McDonald's has gotten people who would not try a latte, a cappuccino, or other "fancy" beverages to try them. If they like them, it's then logical that they might want to see if Starbucks -- the clear market leader for this type of drink -- is worth the fuss.

Under that scenario, Starbucks gets a chance to win over customers who previously might not have sampled its brand. That doesn't mean McDonald's has lost, though. In fact, it has seen beverage sales push checks higher for existing customers.

That's likely what will happen for Dunkin', too. The company has a loyal customer base that seems willing to buy more expensive drinks. That's good for same-store sales, but it remains far-fetched to think that Starbucks loyalists will switch allegiances for a slightly faster, slightly cheaper espresso-based drink.

Starbucks grew 2018 U.S. same-store sales by 4%. That's an impressive number given the struggles of many malls and the overall retail landscape. And it delivered those numbers in a market where it competed with heavily discounted McCafe promotions. Clearly, the Starbucks customer isn't the McDonald's customer, and the coffee chain may benefit slightly from being the aspirational brand.

Dunkin' may have slightly more overlap with Starbucks, but its espresso efforts aren't likely to change many (if any) minds. That doesn't mean the chain won't succeed in espresso -- clearly, the early numbers are good. Its success, however, will come from expanding sales from existing customers, not taking them from Starbucks.