Please ensure Javascript is enabled for purposes of website accessibility
Log In Help Join The Motley Fool
Free Article Join Over 1 Million Premium Members And Get More In-Depth Stock Guidance and Research
By Keith Noonan – Updated May 9, 2019 at 9:59PM

The resolution to long-running disputes with Apple helped send the chipmaker's stock soaring.

Shares of Qualcomm (QCOM 3.75%) gained 51% in April, according to data from S&P Global Market Intelligence. News that the company had reached an agreement with Apple (AAPL 3.08%) regarding intellectual property (IP) licensing fees for chips used in the consumer hardware giant's mobile devices hit in the middle of the month, prompting massive gains for the chipmaker. 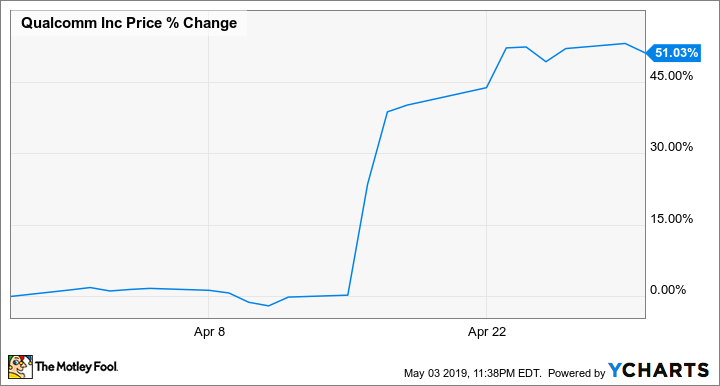 Qualcomm published a press release on April 16, announcing that the two companies had reached an agreement to their long-standing disputes over licensing rates and alleged patent infringement and are dropping all pending litigation. Many details of the agreement remain unknown, but Qualcomm will receive a back payment related to use of its IP in Apple devices and has also signed a big new deal with the iCompany. The core known points of the recent agreement between Apple and Qualcomm are found below:

The rapid gains for the stock on the heels of the truce with Apple forced short-sellers to cover their positions, triggering a short squeeze and helping to send shares even higher.

The announcement of an agreement between Apple and Qualcomm ensures the companies will be working together during the pivotal transition to 5G and looks like a significant blow to Intel. Qualcomm's rival in the chip space has been jockeying to get more of its chips into Apple handsets, but that avenue seems to have less opportunity now, and Intel shares have fallen roughly 10% since the deal.

Despite recent sell-offs in the market stemming from late-breaking complications in trade talks between the U.S. and China, Qualcomm stock has continued to inch higher in May. Shares are up roughly 2.5% in the month so far. 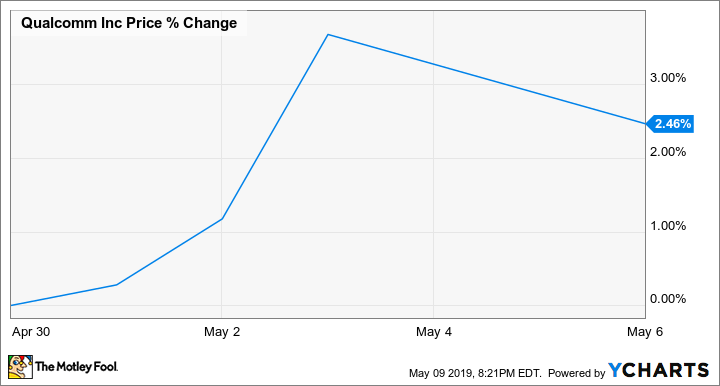 Qualcomm shares trade at roughly 23 times this year's expected earnings and have a forward yield of roughly 3% after the stock's big gains.