Please ensure Javascript is enabled for purposes of website accessibility
Log In Help Join The Motley Fool
Free Article Join Over 1 Million Premium Members And Get More In-Depth Stock Guidance and Research
By Scott Levine - May 9, 2019 at 12:43PM

The new look to this gold miner's portfolio was only one reason investors acted last month.

Reversing course from the 11% climb they experienced through the first three months of 2019, shares of Yamana Gold (AUY 1.61%), a global leader in gold mining, dropped more than 16% last month, according to data from S&P Global Market Intelligence. Movements in the stock prices of gold miners are closely correlated with the rise and fall of the price in gold in general, so the stock's decline is unsurprising considering the price of the metal fell 1.1% last month.

Besides commodity prices, Yamana's mid-April announcement of a significant change to its portfolio and the general signs of a strengthening U.S. economy also moved investors. 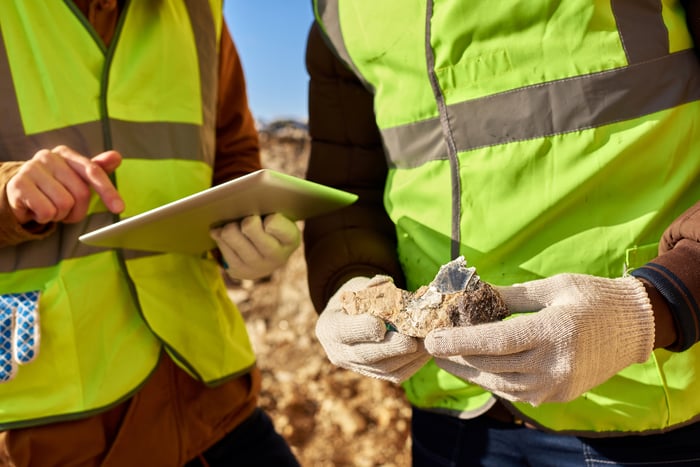 Evidently, for many of Yamana's investors, it's not so easy to say goodbye. The day before Yamana announced its intention to sell Chapada, a wholly owned copper-gold mine in Brazil, shares closed at $2.56. Following the announcement, however, shares continuously declined, ending the month at $2.19 per share. Why were investors so forlorn? Because Chapada represents Yamana's only copper-producing asset, so following the sale (expected in Q3 2019), the company's risk profile will be less favorable as its portfolio becomes less diversified.

For investors who recognize gold-oriented stocks as a safe haven, the signs of the strengthening U.S. economy provided reasons to shed shares of Yamana in April. Coming in like a lion, the U.S. added 196,000 jobs in March, exceeding economists' expectations and representing a stark contrast to the meager jobs growth the economy experienced in February. Moreover, the U.S. dollar index, which measures the U.S. dollar against several foreign currencies and provides insight into how the rest of the world perceives the U.S. economy, soared in April, reaching its highest mark since June 2017.

While the sale of Chapada may concentrate Yamana's risk, there are plenty of reasons to find favor with the deal. The company will receive $800 million in cash payable at closing and up to an additional $125 million based on the price of gold. And thanks to the influx of cash, management intends to shore up the balance sheet and retire debt, which will result in annualized interest savings of more than $35 million. In addition, Yamana announced that it will be doubling its dividend as a result of its sounder financial position. Yamana, whose future looks bright, represents one of the more compelling options in the gold-mining space, and for investors who have had this gold miner on their watchlists, the recent sell-off certainly makes this stock seem a lot more lustrous.