Please ensure Javascript is enabled for purposes of website accessibility
Log In Help Join The Motley Fool
Free Article Join Over 1 Million Premium Members And Get More In-Depth Stock Guidance and Research
By Billy Duberstein – Updated May 16, 2019 at 8:53AM

Chipmaking is one of the most exciting industries today but potentially the most perilous. Leading makers of CPUs, GPUs, and FPGAs form the core of the most exciting applications out there, from A.I. to high-end gaming to 5G telecommunications. However, technology changes fast, and chipmakers are heavily affected by product and economic cycles. Therefore, revenue and earnings can be highly volatile.

Two of the more exciting stories in the chip sector today are Advanced Micro Devices (AMD -1.22%) and NVIDIA (NVDA -0.66%). NVIDIA is generally regarded as the world's premier GPU maker, with a dominant position in graphics cards across gaming, data centers, and autonomous vehicles. Meanwhile, AMD has historically been the No. 2 competitor to NVIDIA in graphics cards and a distant No. 2 to Intel (INTC -2.31%) in CPUs.

However, AMD has surged over the past few years as operational improvements have allowed it to catch up to competitors, with many investors optimistic that AMD is poised to increase its market share.

Which company is the better buy today? 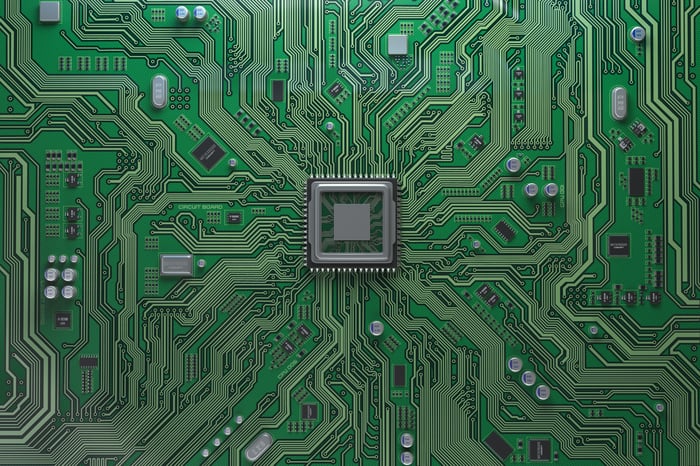 Both AMD and NVIDIA are currently suffering from severe cyclical headwinds. AMD's revenue was down 23% year over year in its latest quarter. NVIDIA hasn't reported its fiscal first quarter yet (that comes May 16) but its revenue also took a 24% decline in its fourth-quarter report.

Both companies are feeling the heat from a downturn in demand exacerbated by the U.S.-China trade war. In addition, both companies are still dealing with the fallout from the cryptocurrency bubble bursting last year, since crypto mining is very GPU-intensive.

How NVIDIA is coping

Besides hoping for a pickup in demand, both companies are also counting on new products to help drive growth. In addition, NVIDIA just used its large cash pile to purchase Mellanox (MLNX) back in March.

The acquisition of Mellanox could either be a savvy purchase or a sign of desperation. Mellanox's interconnect technology complements NVIDIA's GPU computing platform in many of the world's fastest supercomputers. NVIDIA seems to be betting that it can offer a comprehensive solution that would be attractive to data center operators. Those operators use more high-performance computing (HPC) for data analytics and artificial intelligence (AI) workloads in the future. The move comes on the back of NVIDIA's introduction of two types of AI GPUs late last year -- RAPIDS for machine learning and its Turing Cloud GPU for inferencing.

Still, NVIDIA faces headwinds in its core gaming segment, which made up over half of the company's revenue last year. NVIDIA introduced its latest generation of Turing RTX gaming chips with ray-tracing capabilities, but initial uptake of Turing gaming GPUs has been slow, as many popular games still use the older generation Pascal chips. In fact, NVIDIA recently decided to install ray-tracing capabilities into older Pascal chips via a software-driver update -- a strategy that may boost overall sales but may also limit uptake of the company's latest generation.

Investors are excited about AMD's prospects because of new chips coming this year. Specifically, AMD has surpassed Intel in the race to get a 7nm chip to market. In fact, Intel has said it won't have its 10nm chips (equivalent to AMD's 7nm) until the holiday season 2019, whereas AMD's chips are coming to market now. 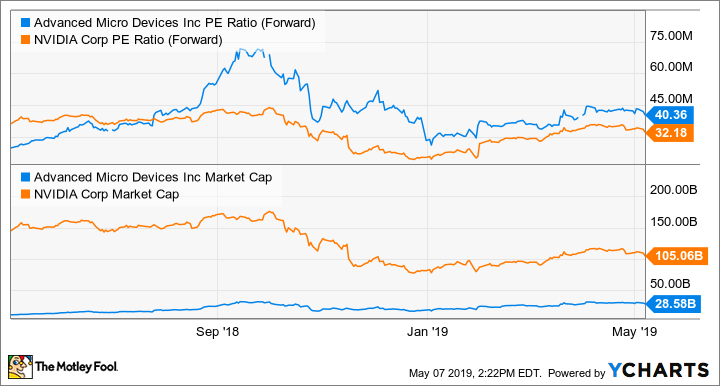 However, AMD's market cap is still much smaller than NVIDIA's, which means AMD could be the better buy if it grows significantly more than NVIDIA over the next few years. AMD seems set for a good couple of years with the uptake of 7nm, while NVIDIA is still likely to be challenged in the near term. However, AMD's big profits haven't come yet. NVIDIA had its big surge a few years ago and has a better balance sheet, so in a way, NVIDIA is more of a "proven" leader.

All that being said, it's hard to pick the better buy between these two today. More conservative investors may like NVIDIA's strong leadership, its bigger cash position, and the fact that it pays a dividend. More aggressive, risk-on investors may be more excited by AMD and the bet that it will continue to steal market share from Intel and others over the next couple of years.

In either case, investors should keep in mind that both stocks trade at relatively high valuations, with significant risk of a pullback should an economic downturn or more fallout from the trade war occur.