Friday morning didn't bring any relief to a beleaguered stock market, as investors remained nervous about the state of U.S.-China relations as tariffs on another $200 billion in Chinese goods went into place. As of 11 a.m. EDT, the Dow Jones Industrial Average (DJINDICES:^DJI) fell 309 points to 25,520. The S&P 500 (SNPINDEX:^GSPC) dropped 40 points to 2,831, and the Nasdaq Composite (NASDAQINDEX:^IXIC) gave up 130 points to 7,781.

Most market participants had their attention squarely focused on the IPO market, as Uber Technologies (NYSE:UBER) aimed to make its debut on the New York Stock Exchange and stake its claim to supremacy among publicly traded ridesharing services. Elsewhere, casino giant Wynn Resorts (NASDAQ:WYNN) reported its latest financial results, but one big question surrounds what the company will do with its Boston Harbor project with regulators seeking hefty fines.

Uber gets into gear

Shares of Uber hadn't yet begun trading as of 11 a.m. EDT, as Wall Street professionals work to find a suitable price at which to allow buyers and sellers to start making trades. With all the drama surrounding the Uber IPO, market watchers can't wait to see how the reality pans out for the ridesharing company. 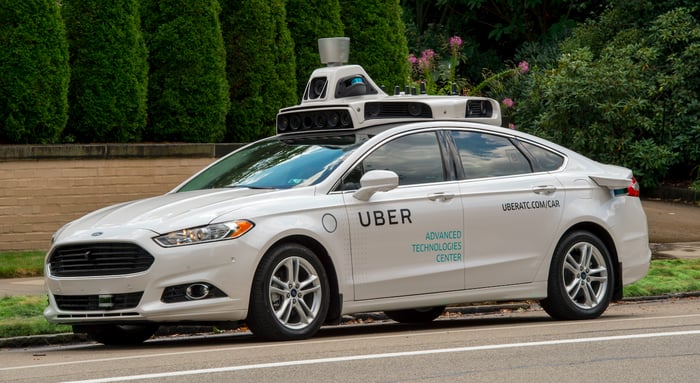 Uber did price the shares that it will offer directly to investors in its initial public offering late Thursday afternoon, and the $45 per share price that it chose was near the bottom of its previous range of $44 to $50 per share. That's not particularly surprising, as Uber undoubtedly wants to avoid the negative experience that rival Lyft (NASDAQ:LYFT) has gone through. Lyft shares have steadily dropped from its IPO as investors have grown more critical of its business model.

Ultimately, Uber faces many of the same challenges as Lyft, including the current need to keep its drivers satisfied while maintaining prices at an attractive level for customers. So far, Uber has been content to seek growth through promotional activities that subsidize use, and that's led to even larger losses than Lyft has sustained.

Uber's long-term plans are more ambitious, with the intent of expanding to provide an all-encompassing list of transportation services. Some are skeptical about the chances of Uber achieving those goals, but at least for today, most of the attention will be on what the ridesharing company's shares do once they open for trading.

A loss for Wynn?

The news from Wynn financially wasn't stellar. Operating revenue fell almost 4% from year-ago levels, with weakness at its Wynn Macau resort and across its Las Vegas properties weighing on its top line. Adjusted net income plunged 27% during the period, falling short of what most of those following Wynn had hoped to see.

Yet one particularly interesting aspect of Wynn's report centered on its plans for the Encore Boston Harbor project, which is nearing completion. The Massachusetts Gaming Commission decided to allow the project to go forward, but it also imposed substantial fines of $35 million on Wynn. CEO Matt Maddox said that Wynn is still reviewing the MGC decision, and although he believes that appealing the decision shouldn't stop the project from opening as scheduled on June 23, he left open the possibility that opening day might slip a week or two beyond that date -- in order to "make sure that it's flawless."

Boston Harbor has drawn a lot of attention for Wynn Resorts, but the fact remains that its Macau operations still play a much larger role in its overall success. If the Asian gaming capital starts seeing weakness once again, then it'll be tough for Wynn to make up for it even if Boston Harbor and other U.S. properties do well.