Please ensure Javascript is enabled for purposes of website accessibility
Log In Help Join The Motley Fool
Free Article Join Over 1 Million Premium Members And Get More In-Depth Stock Guidance and Research
By Rich Duprey – May 14, 2019 at 5:00PM

The big bet Craft Brew Alliance (BREW) (CBA) is making on its Kona+ strategy is beginning to pay off. The craft beer brewer turned in impressive first-quarter earnings results indicating that its primary focus on the Kona Brewing brand, with supplemental support for its lesser beer labels, is going to be a winning combination.

There are a lot of moving parts with the brewer this quarter, but the overall thrust of CBA's performance is of a brewer that has its feet firmly set for the start of a marathon race. 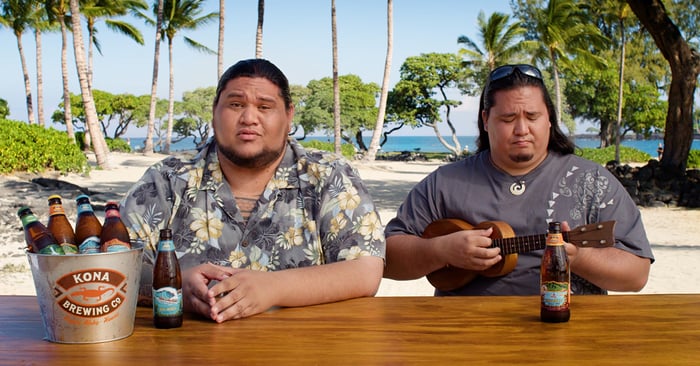 A handful of headwinds

It might not look like it at first glance, however. Revenue for the first quarter was down 0.6% to $49.8 million, generating an adjusted net loss of $0.19 per share. Depletions -- or sales from distributors to retailers, an industry proxy for consumer demand -- fell 5% from last year.

A number of factors impacted the results, though, and while some were expected, others were a surprise. There was the continued drag of both Widmer Brothers Brewing and Redhook Brewery, once high-flying regional craft beers that seem to be crumbling these days. And last October it bought three new brewers -- Appalachian Mountain Brewery, Cisco Brewers, and Wynwood Brewing Company -- which caused an increase in fixed costs related to their brewpubs during the transition to owned brands, but they were able to more than offset those expenses.

In the unexpected category was the settlement of a class action lawsuit for $4.7 million from beer drinkers who didn't read the labels and thought Kona beer was brewed in Hawaii. Rather than engage in costly litigation, CBA chose to settle.

The one real low-water mark for the brewer was its international business, which saw shipments take a surprise turn negative in the quarter. CEO Andy Thomas told analysts on the brewer's earnings conference call, "I don't think I've ever been on the call when we've had international shipments down in the first quarter."

While he could blame Brexit or politics or any number of issues (most of the weakness was in the U.K. and Australia), it was just a bad quarter, and he expects the business to bounce back in the rest of the year.

And that was really all the bad stuff Craft Brew Alliance had -- almost everything else was quite good.

Backed by a big marketing push centered around the NCAA's March Madness tournaments, Kona shipments surged 10% from last year with a 1.5% increase in depletions. Using the wholesale distribution network of Anheuser-Busch InBev (BUD -2.36%), which owns about a third of CBA, the brewer made a big splash for its first major marketing campaign.

Sales to retailers (STRs) quadrupled from last year in April, which is the first full month of results reflecting the impact of the media buy, with domestic growth accelerating into to mid-20%. The company still needs to figure out how long the waves ripple outward, and it doesn't believe the growth spurt will extend across the whole year. But it has increased the brand's awareness, and CBA's priority distributors, who represent 96% of its volume, are on board in pushing Kona further.

As Constellation Brand's (STZ 0.60%) leading Mexican beers Corona and Modelo can attest, imports that celebrate Hispanic culture are especially hot right now. Industry analysts at IRI say Mexican imports account for 20% of beer sales, but represent almost three-quarters of all import sales. The segment's growth is expected to continue for at least the next five years. Constellation recently acquired Four Corners Brewing to capitalize on the sustained popularity.

Craft Brew Alliance is pursuing a similar strategy with Florida-based La Rubia, which is in the process of launching in Puerto Rico and looks to expand beyond its Southern and Caribbean base. It is the one label from the new acquisitions that CBA sees potentially going national. It also has other new beverages coming to market, including a cider-based drink called Pre Aperitivo Spritz, based on Italian aperitifs, and a hard seltzer.

The quarter for Craft Brew Alliance was one where the good far outweighed the bad, even if it didn't show up on the brewer's bottom line. It sets the stage for further gains to be had as the year progresses and shows its Kona+ strategy is bearing fruit.