Please ensure Javascript is enabled for purposes of website accessibility
Log In Help Join The Motley Fool
Free Article Join Over 1 Million Premium Members And Get More In-Depth Stock Guidance and Research
By Travis Hoium – May 14, 2019 at 9:10PM

In buying Dogfish Head, Boston Beer is betting acquisitions will continue to drive growth in a core business that's stagnating.

When Boston Beer (SAM 1.49%) announced the acquisition of Dogfish Head Brewery for $300 million in cash and stock last week, it was big news for the beer industry -- and for craft beer consumers. This isn't a deal that will make Anheuser-Busch InBev (BUD -2.11%) shake in its boots, but it shows where the industry is at today. Craft brewers are consolidating, and independence is no longer assured, even for large craft brewers.

This puts companies and customers in a tough position. Dogfish Head has built a rabid following under the leadership of founder Sam Calagione and now it's selling out to a large competitor. Will it remain a fan favorite, or will Boston Beer become the next beer behemoth that customers abandon for local flavors? 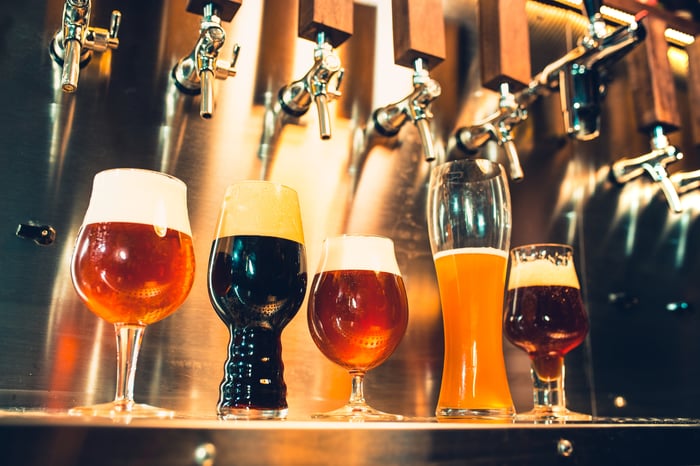 Boston Beer's scale versus the behemoths of beer

The argument both Boston Beer and Dogfish Head used for their merger is the need to develop scale versus much larger competitors. You can see below that Boston Beer is a fraction of the size of A-B InBev, Molson Coors, and Heineken. 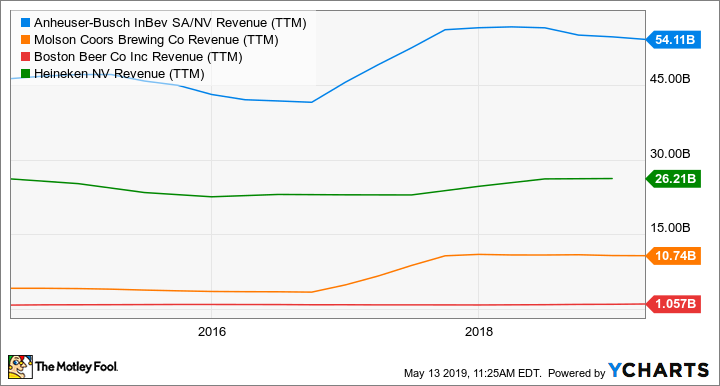 Scale helps lower costs both for marketing and production, so it may make sense for the companies to combine forces from a financial perspective. But what big beer companies have learned in recent years is that beer has become a local business, and buying up hot brands hasn't paid off as some had hoped.

What Dogfish Head leveraged to grow its brand was a unique take on beer production and a rabid local following around its original Delaware location. The uniqueness of the brand made it an in-demand product customers would seek out, with people (myself included) driving for hours just to try their latest beers if distribution didn't reach close to home. The uniqueness of the brand is what made the company what it is.

When a brewer is acquired or grows to a scale where it's no longer unique and local, it loses some of that appeal. Boston Beer's Sam Adams brand is seeing this trend, reporting in 2018 that depletions were down for the year compared to 4% growth for craft beer overall. The company's growth was driven by non-beers like Truly Hard Seltzer, Twisted Tea, and Angry Orchard.

There are limited returns to scale in the craft beer space. After buying about a dozen well-known craft brewers in a decade span, A-B InBev said it isn't buying any more in part because the deals aren't paying off. Acquisitions often come with bad press as the beer behemoth buys the local beer favorite, weakening the smaller company's brand appeal.

Boston Beer isn't yet the size that we can say it'll see the same backlash as an A-B InBev acquisition would, but it's worth considering when there are diminishing returns to a deal like this. As a beer drinker, I rarely order a Sam Adams because it's not unique and it's everywhere. In Minneapolis, where I live, Dogfish Head is still a difficult brand to find at a bar or liquor store and has a similar draw to any number of local brewers who have built a loyal following. Will the desire to drink Dogfish Head change under Boston Beer's ownership? Time will tell.

The real challenge Boston Beer faces is that its core product is no longer growing, and that's causing some heartburn for management. Sam Adams as a brand may have hit its peak and now the company needs to bolt on new products like alcoholic ciders, seltzers, and teas to keep growing. Dogfish Head may be able to help with that growth and will leverage Boston Beer's scale and distribution, but if this move diminishes the Dogfish Head brand, it's a deal that may not be worth the cost in the long run. Constantly chasing acquisitions is an expensive way to keep a company like Boston Beer growing.