Please ensure Javascript is enabled for purposes of website accessibility
Log In Help Join The Motley Fool
Free Article Join Over 1 Million Premium Members And Get More In-Depth Stock Guidance and Research
By Tim Beyers – May 14, 2019 at 6:47PM

Will big bets on powering data centers and data science pay off?

Investors in NVIDIA (NVDA 1.51%) have had a rough time over the past year. Shares of the specialist chipmaker, whose wares are found in everything from cars to video game equipment to data centers, are down more than 35% over the trailing 12 months. 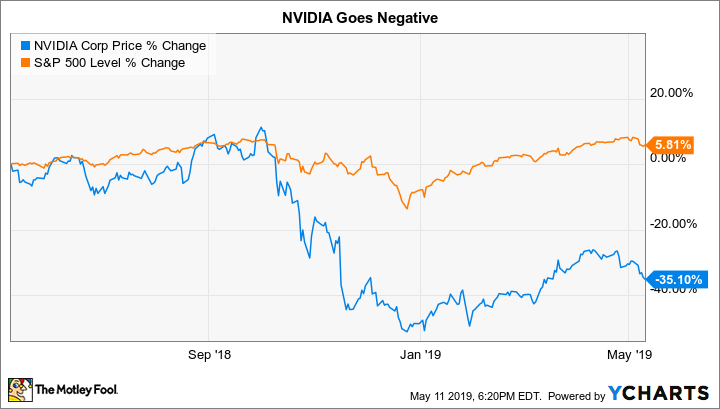 NVIDIA's high-octane chips can be used for tough processing jobs, including data science and artificial intelligence. Nevertheless, demand has slowed since last fall, resulting in a free-falling stock price. Will the losses continue to pile up when NVIDIA reports earnings on May 16? Not if the company sells enough graphics processing units (GPUs) to big customers. Here's what to look for.

We'll know Thursday whether followers of the stock are being too pessimistic. Should revenue come in meaningfully above $2.2 billion, we'll know that NVIDIA is back on track.

In the meantime, it's worth noting that NVIDIA executives have emphasized the size of the addressable market the company is attacking. In data centers alone, the company says, the opportunity is nearly 5 times the entire company's current revenue run rate. 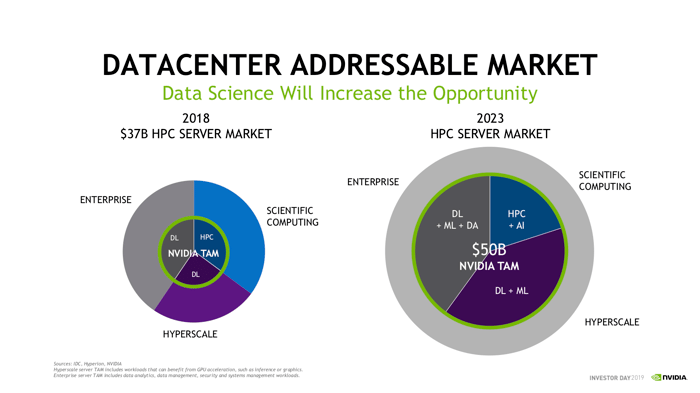 NVIDIA sees a big opportunity ahead, but can the company cash in? Data source: NVIDIA investor presentation.

CEO and co-founder Jensen Huang put NVIDIA's thesis in perspective in his stage presentation for Investor Day, declaring: "Every single industry will benefit from data science. That's why there are so many people ... because the amount of data that you're working on is so gigantic."

Translation: Be patient; the profits are coming.

Nor is there a guarantee that NVIDIA will crush its depressed target. The scientific computing market in which Huang places so much faith is already being served by the "hyperscale" providers he's counting on to be continual buyers. Yet fellow data center supplier Arista Networks (ANET 1.67%) saw its stock take a hit on slowing demand from the likes of Facebook and Alphabet. NVIDIA could just as easily report similar slowing this week.

I'm not a buyer of NVIDIA stock, yet. The story is solid, and the opportunity is most certainly real. But you don't have to buy NVIDIA shares to get meaningful exposure to the data science or artificial intelligence trends. Far cheaper stocks with serious growth potential are enjoying similar tailwinds. Stitch Fix (SFIX 2.54%), for example, is one of the biggest internal users of data science to help foster deep relationships with its clients, a strategy that appears to be taking hold.

So don't rush into NVIDIA stock. Watch it, wait, and keep some cash handy. Odds are this one is going to remain volatile for a while.