The trade war between the United States and China escalated last week after President Trump hiked tariffs from 10% to 25% on $200 billion worth of Chinese goods. The announcement caught many companies and investors by surprise since earlier reports indicated that a trade deal had nearly been reached.

China retaliated by raising tariffs up to 25% on $60 billion in U.S. goods. That double whammy of bad news sparked a marketwide sell-off as investors scrambled toward defensive stocks that aren't dependent on trade between the U.S. and China.

As the trade war rages, one stock to consider is LVMH Moet Hennessy L.V. (OTC:LVMUY), the biggest luxury-goods company in the world. Here are four key reasons LVMH is a great defensive stock to own as the U.S. and China work to settle their differences.

1. It won't be caught in the crossfire

LVMH produces some of its products in China, but the company is based in Paris and Europe isn't engaged in a trade war with China. The U.S. is threatening to hike tariffs on a wide variety of European goods, but none of LVMH's core products are included on that list.

The bears might argue that the aftershocks of the trade war could cause recessions and throttle consumer spending in the U.S., China, and other markets.

That's certainly true, but high-end luxury companies like LVMH generally thrive during recessions, since more affluent customers struggle less during economic downturns. Here's how it fared during 2008-2010, the worst years of the financial crisis:

The Great Recession barely dented LVMH's growth, and the company recovered much faster than other businesses. LVMH also never marks down its merchandise -- it famously destroys its unsold inventories to prevent the products from being sold at discounts that might cheapen its brands. 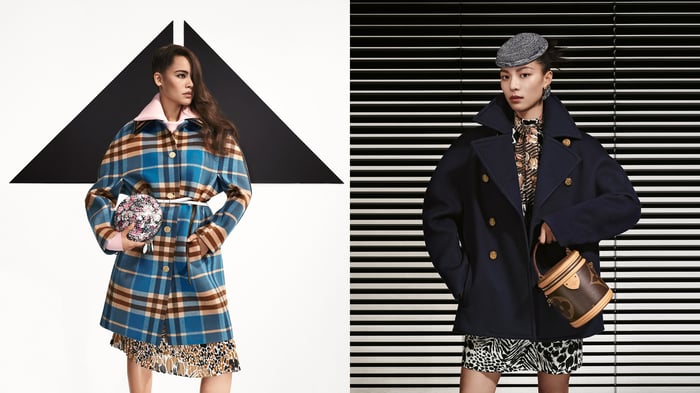 3. A well-diversified portfolio across multiple markets

The growth of LVMH's fashion and leather unit is impressive relative to "affordable" luxury rivals like Tapestry and Capri Holdings, which are expected to generate 3% and 11% sales growth this year, respectively.

Furthermore, LVMH's operating margins expanded across all five business segments in 2018, which indicates that its brands still have tremendous pricing power.

LVMH might not seem cheap at 27 times earnings, especially when Tapestry, Capri, and other luxury stocks trade at lower valuations. However, it pays a decent forward dividend yield of 2.3% and regularly raises that payout and repurchases its stock.

LVMH's free cash flow rose 16%, to 5.5 billion euros ($6.2 billion) last year. Within that total, it spent about 3 billion euros on dividends and 800 million euros on buybacks. It also hiked its annual dividend 20%, to six euros ($6.73) per share, and it's raised that dividend annually at an average rate of 14% over the past five years.

LVMH's stock probably won't take off anytime soon, but it's well insulated from trade tensions, has a recession-proof business model, and spends most of its free cash flow on boosting shareholder value. That makes it a solid long-term play in my book, regardless of what happens between the U.S. and China.