The autonomous drone delivery subsidiary is also preparing to launch in the U.S.

After graduating from Alphabet's (GOOG -1.85%) (GOOGL -2.03%) moonshot factory, X, last summer, Wing commenced commercial drone deliveries in Australia last month after obtaining regulatory approval in that country. That was after conducting a pilot program over the course of 18 months, and the company has previously said it was preparing to launch a similar pilot in Finland.

Wing, which offers autonomous drone deliveries and an unmanned traffic management (UTM) platform, just said it's preparing to take off in Helsinki, the capital of Finland. 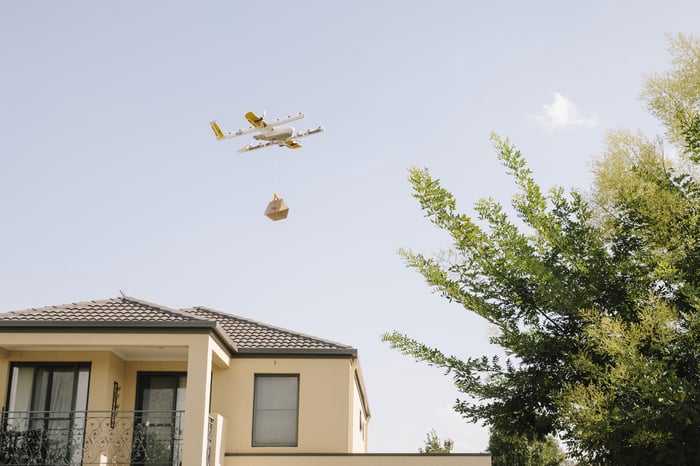 The Alphabet subsidiary announced that it plans to kick off its pilot program in Helsinki, Finland, within a matter of weeks, delivering packages for local businesses in the city's Vuosaari district.

Wing's drones can carry packages that weigh up to 1.5 kilograms within a distance of around 10 kilometers. Vuosaari is the most populous district in the city, and the population density makes it a good fit for short-distance deliveries. The service will initially partner with two local businesses, a gourmet supermarket and a cafe, to deliver groceries and meals.

The company argues that autonomous drone delivery can benefit the environment by reducing greenhouse gas emissions. For example, Wing estimates that 12% of Finland's greenhouse gas emissions are generated from road transportation, which can be reduced by using electric drones. The drone delivery service will also help the city's broader efforts to make car ownership obsolete by 2025 by eliminating the need to make some of these types of short trips to the local store.

Helsinki will be Wing's second market after Canberra, Australia. Last month, Wing became the first drone delivery company to receive certification as an air carrier by the U.S. Federal Aviation Administration, paving the way to a commercial launch. In addition to clearing the FAA's safety requirements, the agency also cited Wing's "thousands of safe flights conducted in Australia over the past several years" when granting the certification.

Wing plans to start in Blacksburg, Virginia, initially before slowly expanding availability to other parts of the U.S. Much like in the other international pilots, Wing will start by soliciting input and feedback from local communities regarding what kinds of products and goods they would like delivered.

That also means Wing is set to upstage Amazon.com (AMZN -0.19%), which has similarly spent years trying to develop autonomous drone delivery. The e-commerce heavyweight announced its first successful drone delivery over two years ago, but has yet to deploy its Amazon Prime Air drones in a commercial setting. Third-party shipping companies like UPS and DHL are also trying to develop their own respective drone delivery technologies.